I was in one of the big box home improvement stores yesterday and thought I'd take a look at ceiling fans while I was there. Ten years ago when I was building a house and buying a bunch of ceiling fans, it wasn't so easy to figure out which fans were energy efficient and which weren't. That's not the case anymore because every ceiling fan I looked at had a label on the box that tells you how much air movement you can expect for each watt of electricity you put into the fan.

In this blog, I've talked about air flow in duct systems and bath fan air flow, but I've only written one previous article about ceiling fans. That one was about what a waste of energy it is to leave fans running when no one's in the room. Today I ameliorate that deficiency as we take a quick look at the energy efficiency labels on ceiling fans.

Air flow, whether you're talking about duct systems, bath fans, heat recovery ventilators, or ceiling fans, is measured in cubic feet per minute, usually called simply cfm. The higher the number, the more air is moving. Energy usage can be a bit confusing because of the whole rate versus cumulative quantity issue. The watt is the unit for the rate of energy consumption. The kilowatt-hour is the unit for the quantity of energy consumed. 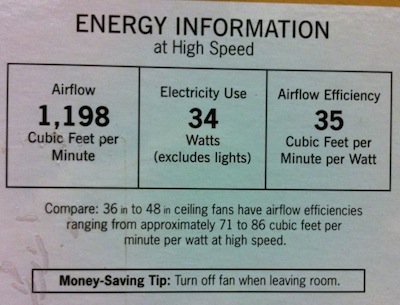 Efficiency of any type is generally an output divided by an input. We can go with either rates or quantities when we look at energy efficiency of ceiling fans. For example, we could give the efficiency in terms of the rate of air flow per unit time (cfm) divided by the energy use per unit time (watts), which in fact is what we do. The labels on the boxes I looked at all showed a box with three numbers, all specified for the fan running at high speed: the air flow (cfm), the rate of electricity use (watts), and the air flow efficiency (cfm/watt). You can see this in the label shown above.

A few of the boxes had more energy data than the simple box shown above. They also happened to be the fans that had the ENERGY STAR label. In addition to showing the numbers for high speed, they also showed the air flow, energy consumption, and efficiency for low and medium speeds. 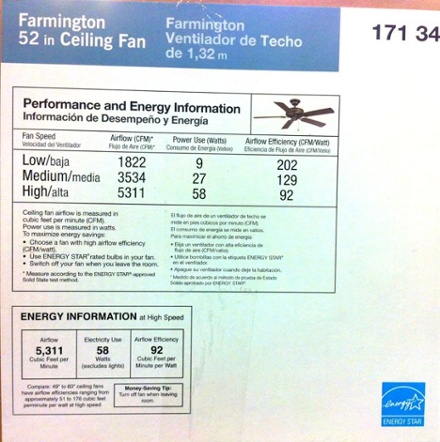 If you look carefully at the two labels above, you'll see one other thing there that I saw on nearly every label: a money saving tip. Here it is:

That's right. Fans don't cool the space. They cool people. They actually heat the space because the motor gives off heat.

Now you're ready to head off to the store and buy yourself an energy efficient ceiling fan. If you're looking for fans at the really high end, you'll probably need to look somewhere other than the big box stores. The label says you can get a large fan that gets up to 176 cfm per watt, but 106 cfm per watt was the highest efficiency at the store I visited.

Thanks Allison. I've been meaning to put up a post on the Haiku ceiling fan by BigAssFans. It looks great but I saw online that their MSRP is around $500!

Allison, Thank you. My constant admonishing to my wife about turning off the ceiling fans when there is no one in the room has gone largely ignored and rejected. I now have some street cred to back me up.

Thanks Allison. I wonder if those labels on CFM also disclose the conditions under which the fans were tested (is there an NFRC for fans?). Ceiling fans can do a couple of different things in a home, and actual results for air movement will largely depend on actual installation, not the store label. By and large a ceiling fan will do two things: increase the flow of air in a given direction, and, largely as a result of the first, de-stratify the air in a room. This de-stratification can be a good or a bad thing (think about it), but by and large if you are FEELING moving air then you will feel cooler, and especially in summer months that can be a good thing. And whether your windows or doors are open in the fan room can really start to complicate things (some ways good, some ways bad - and may actually drive an exception to the rule about turning the fan off when leaving the room in the right pressure conditions). Note that many fan kits come with varying lengths of extender rods. I've seen many installations where the short 8" rod is used and I could almost guarantee that the fan is not achieving optimal performance. A too short air space above the fan can/will impede the performance of the fan.

TC Feick: You could show her some infrared images to scare her straight if that doesn't work.

Charles: Great points. I don't know what the testing requirements are but I'm sure they include proper installation. Of course, as you state, once the fans get installed in someone's home, there's no guarantee they'll perform at the stated efficiencies. As they say for cars, your mileage may vary. Or for financial investments, past performance is no guarantee of future results.

Do you remember a few years ago when Florida Solar Energy Center reported on a high efficiency ceiling fan? It was called the "Gossamer Wind" if I remember. Rather than the usual blunt blades or mock palm leaf blades, it had blades which tapered along the length. It looked more like an airplane propeller than what we are used to... probably not by coincidence as propellers are engineered to move the most air they can with a given amount of power.

I was told the Gossamer Wind series was available through big box stores such as Lowes, but I never saw them displayed. It may underline the fact you have many electricity uses ranging from 100-4000 watts, and optimizing the one that rates 34 watts just is not high on the priority list.

From a consumer perspective, it's great to see that fan efficiency is getting measured and labeled.
In the HERS world, there's still difficulties in collecting this information by raters though. Said box is hardly ever around when a rater does their inspection(s) and even if it happened to be in the trash container the day the rater shows up, it appears from your retail research that the efficiency listed is often the cfm/watt at the highest fan speed. The HERS standards require the efficiency rating at the medium speed setting. Assuming the rater can find the model #, I guess an internet search seems to be the best way to collect this information.

M. Johnson: Yes, the Gossamer Wind fans are sold in the big box stores. The one I mentioned in the article that's rated at 106 cfm/watt is one of them. You may not have found them because they're sold under the name Windward. The one I saw is the Windward IV made by Hampton Bay. Martin Holladay wrote a great article about ceiling fans (I'm adding a link to it in the Related Articles list above.) a couple of years ago, and the comments have more info about the Gossamer series.

Jeffrey: Great points! Yep, fans on porches are great, for both keeping cool and bug-free. I love the term 'gnat knockers.'

Allison, yet another awesome blog post! That Farmington label seems a great example of fans law.

Now, if there were a way of tying that back to maximizing efficiency of design and operation of hvac...

"Keep it as low as possible at all times"?

It has been a couple years and I think people are more aware but I spent some time working in a big box store and the overwhelming majority of folks purchased fans based on cosmetics and price. I am probably like them, I am pretty particular about ceiling fans in different rooms.

I wonder if anyone has seen numbers published, measuring what percentage of household electric use, is consumed by ceiling fans.

Has anyone ever paid the same attention to the efficiency numbers for portable fans? In many peoples eyes ceiling fans are chic and box fans are gauche. But in a place like Houston when poor people have trouble with AC bills, the official stance of the electric company is they should use fans in place of AC. This makes the fanfare for the $500 super efficient ceiling fan seem positively elitist.

I too fail to see the logic of spending $500 for a high CFM per watt fan. Most fans are bought for decorative reasons, but I'm glad to see the CFM/Watt ratings. CFM/watt could be a tie breaker for some people.

What I'd REALLY like to see is how distance mounted from ceiling affects CFM/watt. This makes a HUGE difference compared to motor/blade design. Smaller fans take less of a hit than larger fans when mounted too close. Mount a 36" fan 8" from the ceiling (think 'hugger' style) and do the same with a 52" fan. Both will move about the same amount of air (neither will move much) while the 52" consumes more power. Using the longest downrod that keeps the blades at least 7' above the living space (for safety reasons) will maximize CFM.