On my trip to Aspen, Colorado last week, when I learned to ski, I noticed an interesting snow pattern on a lot of the roofs of the houses near where we stayed. Not being from snow country, I didn't know what they were. In fact, when I posted the lower photo in this article to Facebook, my friend Nate Adams of Energy Smart Insulation wrote, "Heat cables? Are you going to make me come down there?"

I just thought that was an interesting snow melt pattern. Turns out, that interesting pattern is because of the heat strips installed on the edge of the roof to melt snow and ice dams. Who knew?! The photo above shows pretty clearly that something unnatural is going on. In the photo below, it's not really so clear to someone who's not familiar with roof heat strips. (Well, that's my excuse and I'm sticking to it!) 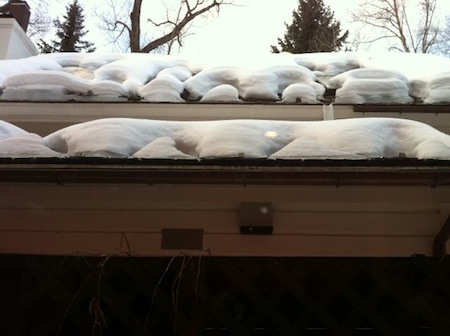 But why are they up there anyway? The aforementioned Nate Adams wrote a guest post on icicles and ice dams for us back in January, so I'll let you go back and read that for a fuller explanation. The short answer is that, much of the time, the snow melts above the the conditioned space because of excessive heat loss from the house. The water then drains down the roof and refreezes at the eaves.

The real solution is to fix the heat loss problem with air sealing and insulation. Because so few people seem to understand basic building science, they install heat strips instead. But hey, they're 100% efficient! And if you have a house in Aspen, paying for electricity is certainly not a concern. They even heat most of the sidewalks in that town.

Glad to see you write about the bane of Northern auditors, Allison. Heat strips are common here in upstate NY. But at 7 Watts per foot, a 40' eave could use 560 Watts to electrically heat the outdoors. Running 24/7, it adds up to a sizable monthly bill. Hopefully the thermal switch will turn it off when it gets warm (many fail in the ON position as confirmed by a summer IR scan).
The local hardware stores and big box stores have displays and parts to build your own system. Let me know if you want me to send you a kit, Allison.
Unfortunately, even air-sealing and insulation don't always fix an ice dam problem. Older homes seldom have enough space between the top plate and the roof deck to add sufficient insulation. Add 2 foot of snow to the roof at an R-value of 1 per inch and one quickly ends up with a warm roof deck above the outside wall. The heat strip keeps it warm all the way to the drip edge. Not an efficient solution by any means, but effective.
While adding rigid foam insulation to the roof deck with the next re-roof job would be preferred, another solution is needed until that time. Heat strips are one solution. Allowing the heat from outside wall top plate to carry to the end of the eaves is another (still not very elegant). Adding large rigid foam crown "molding" to the upper inside of the outside wall is yet another (it allows the thermal envelope to follow the roof line). Anyone else have solutions?

You left out the third leg of that stool. Yes you need air sealing and insulation, but just as important is good ventilation. When I lived in Alaska the venting requirement was twice what is required by the IBC. In Alaska there is a course,Northern Building Design, that is required for all architects, engineers, and contractors who wanted to be licensed in the state.

As part of it you learn that even with great air sealing and insulation, you can still have ice dams and/or icecicles. By venting you get a roof that is as cool as the exterior and when the temps are warm enough to melt snow it will remain liquid till it is off of the roof. In winter you can walk around Anchorage and see which homes are doing well on building performance by how much snow is still on the roof. The more, the better.

I agree partially with the other comments on air sealing and insulation. Ventilation is defeated when it is covered by snow (but, it is absolutely necessary for summer conditions).

However, these do not address what the sun does, temperatures fluctuating above and below freezing, or residual heat loss (even the most efficient homes can leak some air).

Snow fall may be less higher on the roof leading to bare spots that absorb solar radiation, warming the surrounding surface and melting snow which runs down the roof and refreezes at the gutter. Also, when temps rise above freezing and flow into the attic space through proper ventilation, this melts the snow. When the temps fall below freezing, the snow melt can refreeze at the gutter/eaves as well. Architecture also plays a role. Complex roof designs are hard to ventilate and create sunny and shaded areas with higher and lower peaks. Commonly, the melted water is funneled down to a small gutter line which can compound the problem.

We have been using commercial grade versions of what is seen in the article. We embed self regulating heat cables in aluminum panels. Less cable is used than the standard zig zag pattern and much more is accomplished because of the efficient heat transfer abilities of aluminum. There is also a heated gutter guard called VersaScreen IceBlaster which accomplishes two tasks - gutter protection and ice dam/icicle prevention. My company, Wisconsin Ice Dam Solutions, has been using these products for years to solve ice dam problems. And, yes we do advise on air sealing and insulation when these have not been tried.

In the feeble defense of homeowners, I believe a trip inside the homes will reveal lovely cathedral ceilings with minimal opportunities for ventilation or insulation. Son Tom's home in Tahoe City suffers the same icing issues but he decided $25/month for his roof heating system is a least worst option to covering the beautiful hardwood ceiling. Oh well, at least his cedar shake (aka kindling) roof is overdue for replacement :-(.

I think BSC had a good article on ice dams too. It illustrates that in some snowy climates, houses with attics will always have the potential of ice dams since you can't insulate perfectly. A one or two degree loss through the attic is "kept" in by the snow above and WILL cause the snow to melt from the bottom.... can you say ice dams.

I get them this time of year, but it drains through the eave vents for only a short time as we are into warm sun.

One option that doesn't require electricity. The roof rake...

The reason venting is so important is because that heat loss needs to get out of the attic area so it does not lead to melting snow. Someone else said venting doesn't work because the vents get covered with snow. When that happens on a house with good venting the snow immediatly around the vent will melt and the rest will remain. They may get covered for a short time, but not for the whole winter. "If you have to resort to heat strips to make your building work, then the design has failed." is what were were taught in our Northern Building Design course.

I believe we all agree a very heavy snow, in a short time, will block ridge vents (specifically) and if the snow is heavy enough, perhaps other types of roof ventilation as well.

Fifteen years ago I lived in a community of three story town homes and we got a sudden 18" dump, followed by a week of cloudy, single digit weather. The ridge vents were swamped and within a day or two, lines of cars were driving through the neighborhood (people in MD are easily amused :-) to stare in amazement at 30' (!) icycles hanging from hundreds of gutters. I believe the only reason the gutters did not rip off was because the largest, heaviest ice extended all the way to the ground.

We dropped our temperature to 55F (brrrr) for the duration and avoided the subsequent ceiling and wall replacement necessary in many neighboring homes. You are correct to observe it is unlikely ventilation blockage will last a whole season, but the damage wrecked in just a week was bad enough.

I suppose what I'm saying is that it's hard to outsmart Mother Nature and a 100 year event.