Whoa! Let's try that again. Remember back in those science classes when you learned about phase changes, those transitions among solid, liquid, and gas that substances undergo? They're pretty important in building science, too. In fact, they show up all over the place in building science, so let's take a closer look. 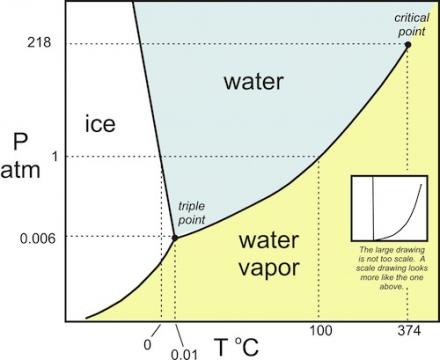 Temperature and heat aren't the same thing, though, so the really interesting thing here is what happens with the amount of heat it takes to raise the temperature of a substance and to make it change phase. Again, let's look at water.

It takes 334 kiloJoules (kJ) to melt one kilogram of ice. Then it takes another 419 kJ to raise the temperature of that kilogram all the way from the melting point to the boiling point. Then it takes 2260 kJ of heat to boil that kilogram completely. Wow! That's a lot of heat compared to the other things happening with water. It turns out to be pretty important, too.

The amount of energy involved in water going between the liquid and vapor phases plays a big role in air conditioning in humid climates. As you probably know, water also is probably the most important single substance in building science. It also proved crucial to Dorothy as she battled the Wicked Witch of the West. It's wise to understand its properties. Let's look at a list of some of the notable phase changes that affect buildings, mostly involving water.

There's a lot of building science to discuss in that list. I've already talked about a lot of it here in the Energy Vanguard Blog, but there's so many directions to go with this stuff, you'll definitely see more. 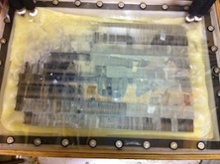 Let's finish up here with a brief discussion of the good things we can do with phase changes. Last year I wrote about Appalachian State University's Net Zero Energy home for the Solar Decathlon, and one of the ideas they used was to store solar energy in a phase change material. During the day, a solar thermal collector on the roof would capture solar energy and transfer it down to the box you see here. The material was solid before and would melt when the heat arrived. Using the heat in the home would cause the material to solidify again.

As you can see above, the Wicked Witch of the West underwent a rather severe phase change. I'm not sure if Dorothy went on to become a building scientist upon her return to Kansas, but she evidently had some good insight into the behavior of water!

Check out my followup article on this topic: Latent Heat is the Wicked Witch of the South. I think you'll like it.

The Magic of Cold, Part 1 - How Your Air Conditioner Works

Another nice post Allison! Wonder if my mother would understand it - or is it just fun for us geeks...

So, what 72f phase change materials are there, and what do THOSE curves look like?

Phase change materials are a nice way to emulate more thermal mass than you have, provided one stays within the phase change range. One company that makes PCM (Phase Change Materials) is Phase Change Energy Solutions www.phasechange.com . They make thermal storage mats for commercial buildings. It's unclear to me whether it is cost-effective to use, but still interesting.

Ted K.: Thanks. I've barely scratched the surface in my learning about phase change materials so I can't answer your question about specific properties.

Dale S.: "Phase change materials are a nice way to emulate more thermal mass than you have." That's a great way to explain what PCMs do! And thanks for the link, which is clickable here: Phase Change Energy Solutions.

PCM was installed on side of a Passive House duplex here in Portland, OR known as the Trekhaus. Portland State University (PSU) is studying it's affects against the side of the duplex that doesn't have the material installed. For more info check out their blog: https://sites.google.com/site/trekhauspdx/