Latent Heat is the Wicked Witch of the South

In my last article, I explained some of the basic science of phase changes, referencing the Wicked Witch of the West and the phase change she underwent when Dorothy threw water in her face in The Wizard of Oz. (I've since added to the article the clip of that scene from the movie.) I listed some phase changes important in building science and promised to come back and talk about latent heat, one of the most interesting concepts in heating and cooling, so here ya go.

It's not the heat; it's the humidity 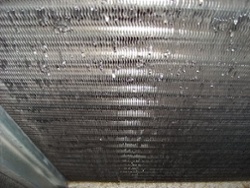 But wait—there's heat in humidity!

To lower the temperature of the air by 20° F requires the removal of only about 10 kJ per kilogram, far less than the 2260 kJ/kg for condensing a kilogram of water vapor. The sensible load is always higher than the latent load, though, because there's much more air than water vapor and, more important, most of the heat that comes into the house (by conduction through walls, ceilings, windows, and floors, for example) is sensible heat, not latent heat.

As our bodies push water to the skin, it evaporates, taking heat with it (2260 kJ for each kilogram). The more water vapor that's already in the air, the harder it is for that sweat to evaporate. So, just as higher temperatures make it harder for our bodies to cool off, so does higher humidity. In the former case, we call it sensible heat; in the latter, latent heat.

It's Called an Air Conditioner — Not an Air Cooler!

On a typical AC system sensuble and latent capacity can be traded by varying the blower speed. Lower blower speed is colder coil andmore latent heat removal. It comescat the expense of less sensible heat removal.

In our hot, dry climate on the West Coast, home performance experts melt the wicked witch by designing for a minimum of 500 CFM of airflow across the coil per AC ton, and utilize long fan over-run times to re-evaporate condensate between cycles (when used with leak free, very high performance distribution systems). In fact, it's the inability to create this condition using popular "green" technologies that is one of the main reasons we think ductless mini splits are not an appropriate primary application for our climate.

Average new homes studied in CA have only 326 CFM per ton, which causes more latent heat removal as Allison explained, lowering the efficiency and further drying already very dry air in homes. Existing homes average even lower- at below 300 CFM/ton. And the cooler you like your home, the dryer your air will be.

Among other health and comfort issues caused by overly dry air, one of the main ones studied is respiratory and sinus irritation and infections, something much more common* and irritating than a long pointed nose, green skin, and a cackling sinister laugh!

(*every American is suspected to have a respiratory infection once each year.)