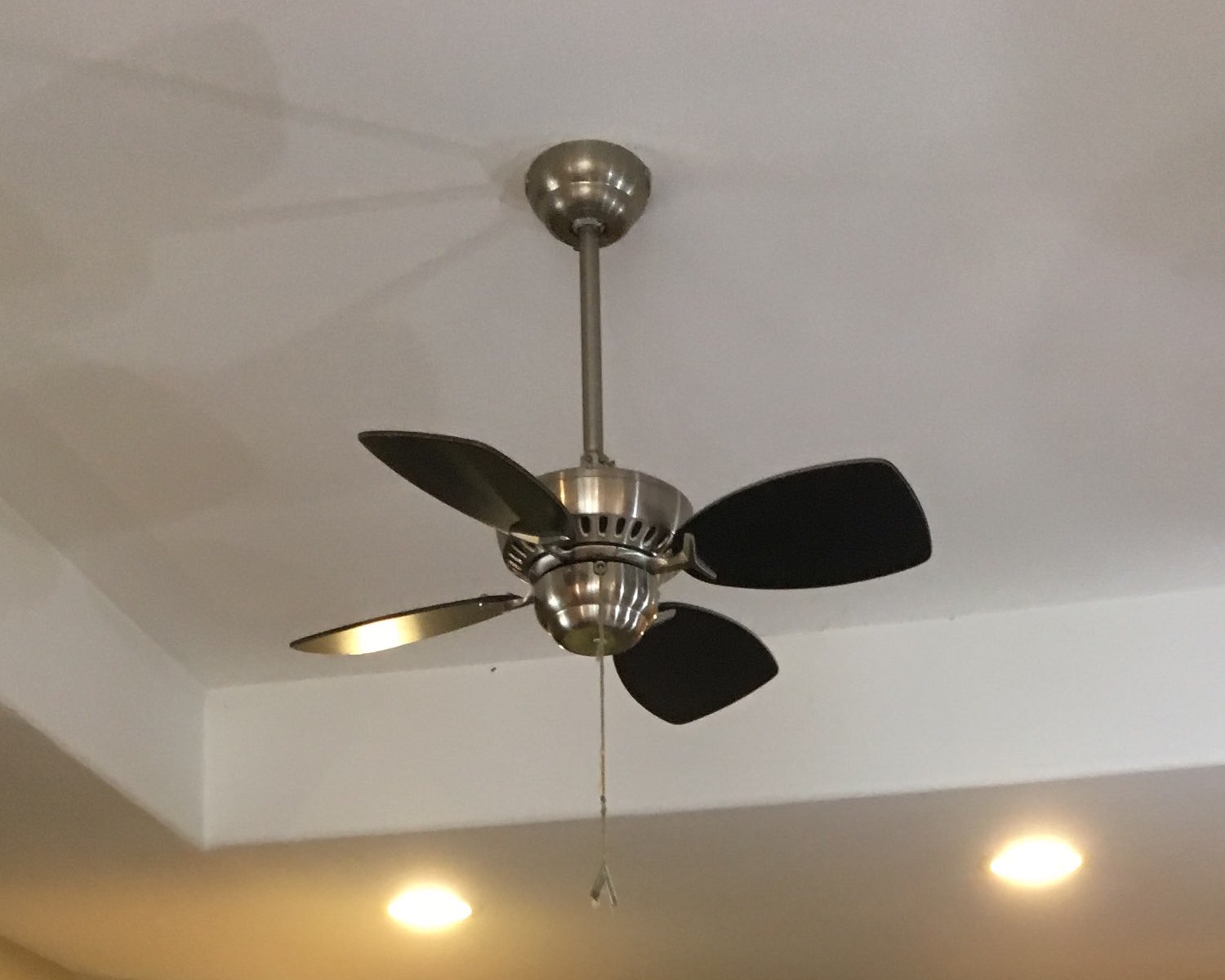 Here we are in the middle of air conditioning season.  So why don’t we chop down some myths and misconceptions about ceiling fans.  What got me on to this topic was a video of a fan with blades that hide on top of the fan when the fan is turned off.  Sounds clever, but it’s a ridiculous idea.

Anyway, here are seven things about ceiling fans that a lot of people seem not to know.

Yes, a ceiling fan is a cooling device.  (See number 2 below.)  But its effect on the room it’s in is to add heat.  Why?  Because electric motors are devices that turn electrical energy into mechanical energy, most of which ends up as heat.  The infrared image below shows a ceiling fan motor that’s hotter than the room it’s in.  From the second law of thermodynamics, we know where that heat is going — into the cooler room. No, it’s not a lot of heat, but just be aware that the net result of running a ceiling fan is that you’re adding heat to the room, not cooling it.  [Extrapolation:  Pretty much all of the electricity you use inside your home turns into heat.  The exception is the little bit of light energy that escapes.]

Ceiling fans are useful for cooling only when they move air over skin.  They cool our bodies two ways:  by aiding evaporative cooling and by aiding convective cooling.  If the air movement created by a ceiling fan isn’t hitting anyone’s skin, it’s just making the space warmer with no cooling benefit.

3.  A fan’s efficacy tells you how well it moves air

Every new ceiling fan being sold in the US these days is labeled with its efficacy.  (Efficacy is an efficiency rating where the output and input quantities have different units.)  For fans, the measure of efficacy is how much air flow you get for the amount of electrical energy you put in.  Its units are cubic feet per minute (cfm) of air flow per watt (W) of electrical power.  A good fan will give you more than 100 cfm per watt;  a poor one might be as low as 30 cfm per watt. Next time you’re looking for a ceiling fan, check the label.

4.  Bigger is better with ceiling fans

While you’re checking those labels, you may notice a correlation.  The fans with the longest blades have the highest efficacies and those with the shortest blades have the lowest.  That’s why the company Big Ass Fans makes big ass fans.  And it’s why you’ll want to avoid the little short-blade fans like the one above, no matter how cute, if you’re interested in air flow.  If you just want cute, though, go right ahead.

Another thing you’ll notice when looking at fan efficacy labels is that you’ll get more cfm per watt when you run the fan on medium than on high and more still on low than on medium.  The only logical conclusion here is to get the biggest fan you can fit into the room, leaving proper clearances, and run it on the lowest speed that keeps you comfortable.

6.  Ceiling fans probably won’t save you any money if you have air conditioning

Martin Holladay covered this in his ceiling fan article from 2010, but it’s worth reviewing.  If you don’t have air conditioning at all, having some kind of fans can preserve your sanity.  You get to keep cool for a relatively low cost.

Once you have a house with air conditioning, though, the dynamics change.  That air moving over your skin still feels good, and so does the low temperature, low humidity air produced by the air conditioner.  The hypothesis is that people will raise the AC thermostat setting if they’re feeling the breeze of the ceiling fan, but the data don’t support it.

In short, for ceiling fans to save you money on your energy bills, you have to set the thermostat to a higher temperature.  I do it in my house but FSEC found that most people don’t.  Better yet, use the fans instead of air conditioning when you can.  Here in the Southeast, that’s usually in the spring and fall because of the humidity thing we’ve got here.

7.  A ceiling fan can decapitate you

I didn’t even know there was a myth about this until I saw the Myth Busters video below.  Apparently some people worry about getting their heads chopped off by a ceiling fan.  And it can certainly happen, as you’ll see in the video below…but only if you replace the motor with a more powerful one (like a lawn mower motor) and change out the ceiling fan paddles with razor-sharp blades.

So relax!  You won’t get your head chopped off by a (normal) ceiling fan.  But you can certainly use more energy and make your home warmer by using one.

Oh, and that fan with the nesting blades is a ridiculous idea because it has two problems:  The blades have to be short to be able to nest together on top of the motor, and the blades are designed for nesting, not moving air.  If you don’t like the looks of a ceiling fan, that’s fine.  But why even have something like this at all if it’s not going to move much air?

What Is the Difference Between Energy Efficiency and Efficacy?