Oriented strand board (OSB) gets blamed for a lot of problems that are really the fault of the designers and builders. Part of the problem, of course, is the perrenial confusion between correlation and causality. OSB hit the market as we really started getting serious about insulation and air sealing. As I described in the story of painters refusing to paint insulated homes, building assemblies that keep the exterior sheathing and cladding colder restrict its ability to dry. Is that the fault of the OSB? Or the insulation? Or the lack of a vapor barrier? Or something else altogether?

How is OSB different?

Oriented strand board is that flaky plywood you see on most residential jobsites these days. (That's a closeup of a piece in the photo above.) I toured an OSB plant several years ago and got to see how it's made, from beginning to end, logs to 4'x8' sheets. It's pretty cool! To get a sheet that's 1/2" or 3/4" thick, they start with a layer of chips (called strands) that's about 6" thick.

OSB replaces the previously dominant sheathing material, plywood. Their properties, however, are not the same. Joseph Lstiburek, PhD, PE, wrote about the importance of recognizing the differences in his article, Mind the Gap, Eh? In it, he showed the following graph of permeance.

As you can see, plywood and OSB have about the same permeance when the mean relative humidity (RH) is low. But as the RH mean grows, so, too, does the difference between plywood and OSB in terms of their ability to move water vapor through from one side to the other. 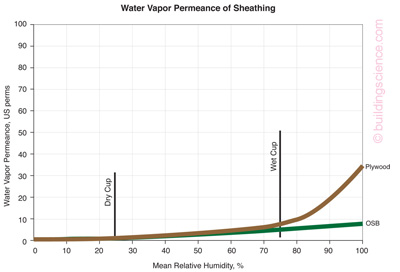 Joe's recommendation: "The key seems to be an air gap between claddings and sheathings and an ability to redistribute moisture – typically facilitated by – yes, you guessed it – a gap." Read his article for the full scoop on that, but in short, this is why we need vented rain screens on homes sheathed with OSB.

The units of these two quantities aren't very pretty, but I suppose you want to see them, don't you? Here they are in imperial, or inch-pound (I-P) units:

[permeance] = grain/square-foot·hour·inch of mercury, which we normally shorten to perms

Don't say I didn't warn you!

The Quirkiness of OSB, a Summer Camp presentation

The graph depicted in Image #2 (below) shows that the permeance of OSB is really low when the mean RH is low and that it doesn't even reach 10 perms when the mean RH is 100%. That means it's still a class III vapor retarder at best, whereas plywood, which gets up over 30 perms, becomes quite permeable as the mean RH grows. So, plywood dries better than OSB, but how well do we really know OSB?

At Building Science Summer Camp this year, Chris Timusk, a building science professor at George Brown College, gave a presentation called The Quirkiness of OSB (pdf).  He did his doctoral research on OSB and how well it deals with moisture. I've spent the past few days reading as much of his dissertation as I could, and I have to say, it's a fascinating and well-written document. (Click to download pdf version.) Chapters 2-4 give the general background information on wood, OSB, and moisture and, I believe, are readable even by those without science degrees (although that would certainly help).

Timusk saw the existing data on OSB and realized that we really didn't know much at all about how well it handles moisture. For example, if you look at a graph of OSB permeance like the one above, you need to know what type of OSB it was. OSB comes with a range of densities, resin type and content, and surface treatments.

So that was the first thing he wanted to look at. Table 5.1 below shows the sample types Timusk chose to study. 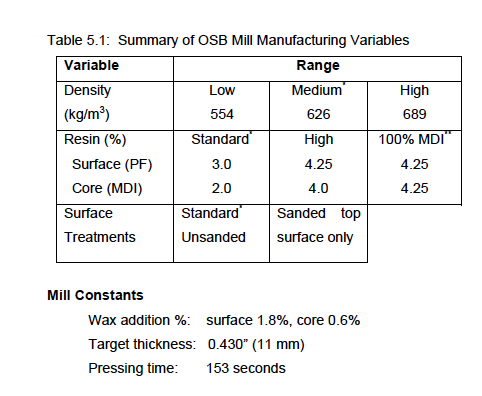 His research project looked at two important moisture properties of OSB: permeability and sorption. The former, as stated above, tells you how much moisture moves through a material under a given set of conditions. The latter tells you how much moisture the material can hold as you vary the relative humidity. In this article, I'm going to discuss only his permeability results and will come back to sorption in a future article. 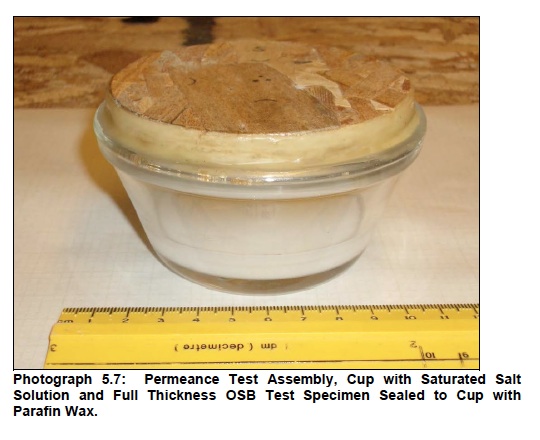 The photo above shows one of the samples he studied. They manufactured the OSB themselves just for this experiment but did so in a commercial OSB plant, not in a lab. Then they cut to various sizes and shapes and sealed them to the top of the cups, as shown above, and placed the cups in a chamber where they could control the temperature and humidity on the outside of the cup.

In each cup was either water, for the wet cup results, or a dessicant, for the dry cup results. They would periodically weigh the samples and cups to see how much moisture they gained or lost. That allowed them to calculate the permeability.

Here's a quick look at the results of all the permeability tests they ran. Figure 7.11 below shows that there's quite a lot of variation from the least permeable to the most permeable sample. Here are the main takeaways: 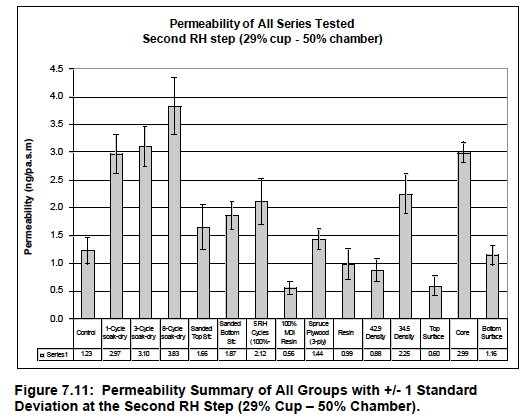 Now, let's look at the most interesting part of this research.

About the latter, Timusk wrote in his dissertation, "The findings from the relative humidity cycled specimen are perhaps the most significant of all the tests conducted." Why? Because repeated exposures to high relative humidity aren't that uncommon.

Here are the results for both the liquid and vapor wetting tests. 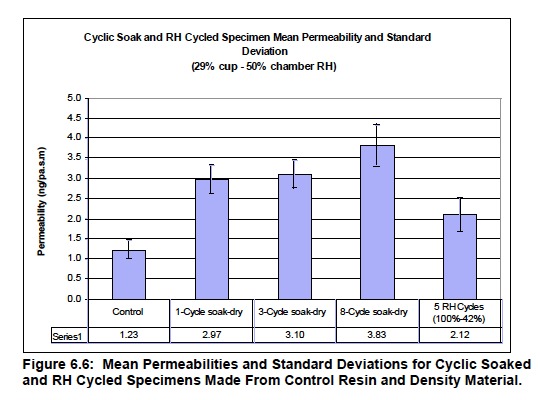 As you can see, in both cases, the permeability of the OSB increased with repeated cycles of wetting. For soaking, it increases by nearly a factor of four. For exposure to humid air, it nearly doubles. Wow!

How should we build with OSB?

OK, so the main takeaway here is that we don't really know how permeable the OSB we're using is. If you've got a type that has higher density or more resin, your OSB may have a lower permeance than the material specifications say. If it's lower density or has been soaked and dried or repeatedly exposed to high humidity, it probably has higher permeance than stated. 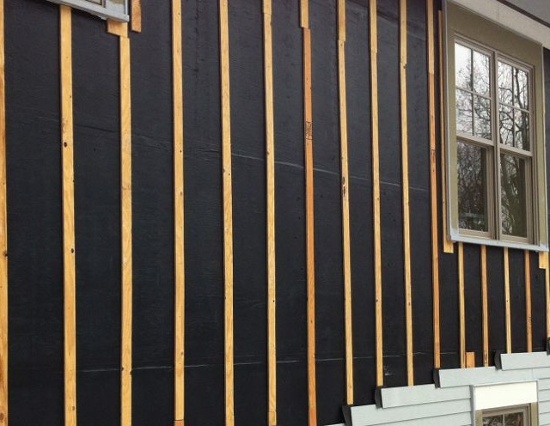 What we do know, however, is that it's still not as permeable as plywood. That means you should assume it needs some help drying out, so always follow the two main rules of moisture management:

Flash the windows properly. Use overhangs. Install your cladding over a gap with a vented rain screen.

Remember, there are three things that can cause a building to fail faster than anything else: rain, moisture, and water. Respect the H20 molecule!

The Quirkiness of OSB, by Chris Timusk, PhD (pdf)

Allison: Good article. Looking forward to the sequel. Did the report mention any dimensional changes? Seems to me from observation that the thickness increases very slightly. The OSB lightens in color and its surface gets a little fuzzy too. Anyone else observe anything similar?

John K.: Thanks. Yes, he did talk about swelling due to moisture. Soaking in liquid water induces a lot more of it (~20-30%) than high relative humidity (~7%), but they both have an effect. I thought about including that but decided against it because the article was already long. You can read all about it in Prof. Timusk's dissertation, which you can download with the link above.

My main takeaway from Mr. Timusk's presentation at summer camp is that OSB will never return to original factory dimensions once undergoing one or more wetting/drying cycles. I have seen composition roofs in my area show elongated "humps" through the shingles, where apparently at each seam between OSB panels the material swelled up and never returned to original size. While I have long thought the irregularities in the roof decking were moisture related, I did not know about the characteristic of the OSB not returning to its former size.

Thanks for blogging about Timusk's presentation; it was among my favorites at camp, along with Hal Levin's IAQ insights and Graham Finch's osmosis of cold applied roofing membranes.

Thanks for the recap for those not at camp!
I also recently heard from a fellow Passive House architect that some OSB--apparently the stuff made from soft Southern wood--is not airtight, at least to PH levels. Before cutting in windows they couldn't get below 0.9ACH50. It's not all created equal?

Very interesting! The question that was going through my mind while reading was how do you know what materials and how the OSB constructed. I'm going to go to Lowes and Home Depot to see if they have descriptive literature.

Baffle them with Charts and Grafts, but it still remains OSB is Pure Crap