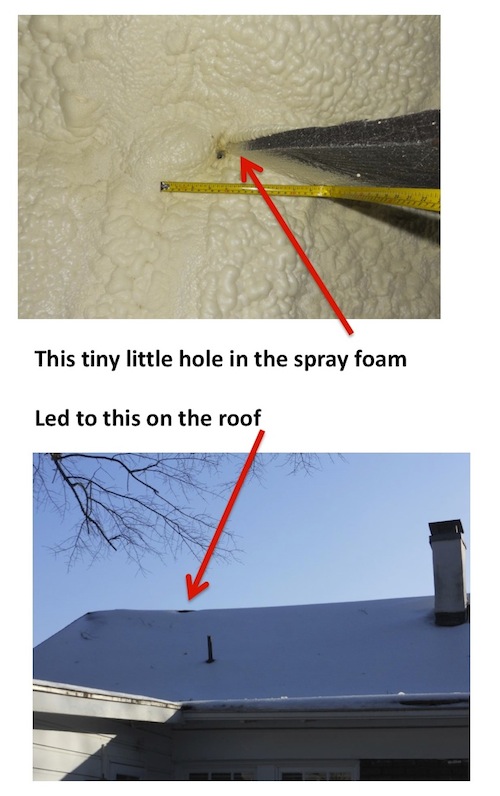 Snow on the Roof is the poor man’s infrared camera. During the snow days we just had in Atlanta, Jeffrey Sauls sent me the photo above.

What you see is the roof of his own house, which he’d had insulated with open cell spray foam last year. As I wrote last June in 4 Pitfalls of Spray Foam Insulation, the product by itself is not the end all and be all of insulation. You have to make sure the installers pay attention to the details.

The reason that tiny little hole, which is such a small percentage of the area of the whole roof, makes such a difference is that the heat flow at that point is about 20 times greater than the heat flow through the insulated part of the roof. Unevenly distributed insulation has a much bigger effect than you might think, whether it’s in a ceiling that has half the area at R-50 and the other half at R-w10 (as I wrote about in Flat or Lumpy) or 99% insulated to R-38 and 1% insulated to R-1 (as can be the case with uninsulated pull-down attic stairs).

As you may have heard, we’ve had an abundance of poor man’s ‘thermal imaging’ opportunities this year, with close to 10″ of snow total on two separate occasions. If you’ve got a camera, some basic knowledge of building science, and can do a little sleuthing, you can find some interesting things.