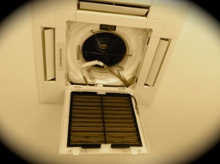 Heating, ventilating, and air conditioning (HVAC) systems have undergone great development since our cavemen ancestors huddled around the fire in winter and fanned themselves with palmetto leaves in summer. The rapid development of efficiency and performance experienced by other industries, however, seems to have bypassed HVAC in recent decades.

Although electronically-commutated motors are now replacing the increasingly obsolescent permanent split capacitor in the drive for psychrometric consolation, the anticipated paradigm shift in residential mechanical systems seems always just beyond the reach of synergistic collusion.

For a number of decades, however, work has been proceeding in order to bring perfection to the crudely conceived idea of an HVAC system that would not only supply inverse reactive current for use in unilateral phase desuperheaters but would also be capable of automatically synchronizing the relative motion of conductors and fluxes. Such an instrument is the Turbo-Thermo-Encabulator Max.

Now basically, the only new twist was the addition of hydrocoptic marzel vanes to the thermostatic expansion valve. Rather than being so-fitted to the ambifacient lunar wane shaft, however, these antidisentropic modules undergo a series of phase-shifting

heteroepitaxial quantum fluctuations to relieve the magnetoreluctance of all capacitive directance.

To more fully attenuate the temporal wobble in the ancillary tesserect, all spurving bearings have been replaced with heavy-duty, zircon-encrusted girdlesprings. The inverter-driven dingle-arms then promote the accession of semitoroidal interactions in the molecular sieve, with the consequence that side fumbling is effectively prevented.

The Turbo-Thermo-Encabulator Max has now reached a high level of development, and is being successfully used in the operation of, not only nofer trunnions, but also twofer trunnions, which can be used to activate mini-split thermal diverters, and occasionally nogo and even bogo trunnions.

Because HVAC systems are but one component in the complex edifice systems studied by building scientists, the Turbo-Thermo-Encabulator Max encompasses the entire array of hygrothermobaric control layers in the typical building enclosure. No longer will the befuddled homeowner or facilities manager struggle in deciding which repair-person to call when something goes wrong. The net result of the technologies elucidated herein is the complete nonentropic operation of the device. In other words, the Turbo-Thermo-Encabulator Max, once installed, obviates the need for any contractors and is fully guaranteed for the life of the Universe. Moreover, the actuation panel for this revolutionary HVAC system is pure elegance, consisting simply of a single binary control device.

It’s not cheap, but factories in China are working around the clock to ensure sufficient quantities will be ready in time for the upcoming holiday shopping season.

Historical Film of the Turbo-Encabulator

The short video below, produced in 1977, shows Bud Haggart explaining the principles of the Turbo-Encabulator, as applied to automotive transmissions.

Who deserves the credit?

The original Turbo-Encabulator was the brainchild of one John Hellins Quick, a British student who published a paper titled, The Turbo-Encabulator in Industry in 1944. The Turbo-Thermo-Encabulator Max is the result of a chain of events spurred by one Dan Kerr, a mechanical engineer with McClure Company, as well as a blogger and triathlete (who happens to be competing in the Lake Placid Ironman Triathlon this weekend – Go, Dan!).

Relax. This is just a bit of fun because April Fool’s Day doesn’t come often enough for me. If this article makes you want to unsubscribe or see me take a long vacation, this may not be the blog for you. If, however, you spend your spare time reading instructional novelettes with such titles as “How to Bury Yourself in the Ground Up to Your Neck” and “How to Get Your Hand Encased in a Hardened, Bucket-Shaped Oatmeal Plug,” then you’re in the right place.

Be sure to see my interview with the alleged inventor of this alleged device, too.