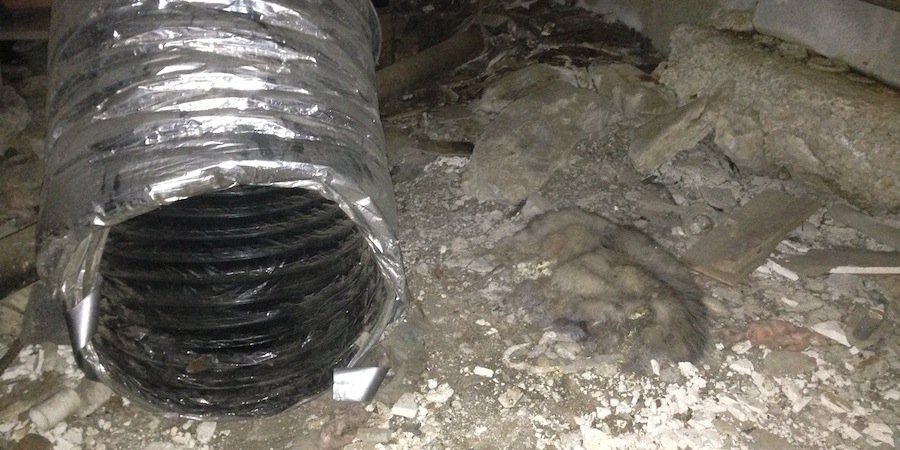 The next best thing would be to keep the dead possum outside your home, say in the crawl space, and pipe the emissions into the house. That’s exactly what these homeowners were doing, unintentionally. Our friends at E3 Innovate in Nashville, Tennessee sent us this photo of what they found in the crawl space under the home of one of their customers.

See the possum? See the problem? The dead possum by itself is bad enough, but there’s one thing in this photo that makes it even worse. The photo below shows you what it is. 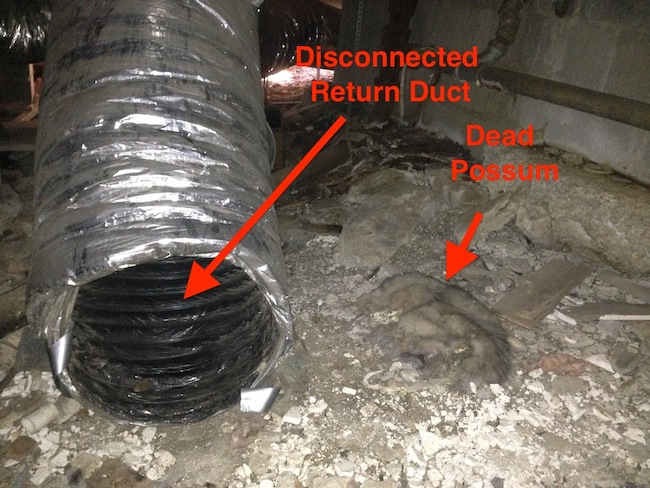 Now, if you know anything about forced air heating and cooling systems, you may be wondering what the other end of that return duct is connected to. It could be connected to a return grille, in which case the noxious emanations would travel up into the house relatively slowly. Anytime someone in the home walked by that grille, they’d get a powerful whiff.

The immediate fix here, of course, is to get rid of the dead possum and then reconnect that return duct. To solve the general problems of having a vented crawl space, encapsulating it is the ticket. E3 Innovate does a beautiful job encapsulating crawl spaces, which they did in this home. The photo below is from a different home, but you can see how nice it looks when it’s all shiny and clean. First of all, when you go to all this trouble to encapsulate a crawl space, it’s a lot less likely that you’re going to get possums in there. I’m not saying it’ll never happen, but it’s improbable. If one does get in there, it’s pretty easy to find and remove.

This is why that old expression about possums is so popular. You know the one I’m talking about, right? The one about how something “stands out like a dead possum in an encapsulated crawl space.” Surely you’ve heard it before.