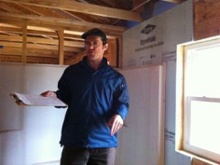 We view our work as successful when it transforms lives and promotes positive and lasting social, economic and spiritual change within a community; when it is based on mutual trust and fully shared accomplishment; and when it demonstrates responsible stewardship of all resources entrusted to us.

Kevin Gobble is a Sustainable Building and Design Specialist, and he’s one of the many people in the organization pushing Habitat to make their homes better. A few years ago, they decided that all their homes (at least in the US) would be built to ENERGY STAR new home standards and get the ENERGY STAR label. Not all of the affiliates have gotten on board with that, but plenty have.

In addition to Kevin, who works out of the Atlanta headquarters, I’ve met many other Habitat folks from around the country who are smart and dedicated and making sure that Habitat’s homes are indeed affordable, high-performance homes. A few that stand out are Tiffani Irwin and Rob Howard in NC, Ed Brown in Seattle, and Andy Bell in Alabama. Then there are all the certified home energy raters who work to get the homes rated and certified. Energy Vanguard’s own Jeffrey Sauls has put in a lot of volunteering (and even won an award for it), as have many of the raters that we work with as their HERS provider.

Last week, I was doing quality assurance on our raters in Boone, North Carolina and got to visit a Habitat community in Mt. Airy, NC. (Yes, that Mt. Airy, the one also known as Mayberry, home of Andy, Opie, Aunt Bee, Barnie Fife, and Floyd the barber.) The photo at top is Scott Suddreth of Building Performance Engineering telling me about some of the features in this house. Notice the sheathing behind the bathtub. Many homes don’t have that, but it’s required by ENERGY STAR and Advanced Energy’s System Vision program, which Habitat in NC also participates in. The three houses being built there are truly high-performance homes. Greg Russo, the builder and a fellow Louisianan (though I grew up way down the bayou from him), really gets it and is doing a fantastic job with the homes he’s building. Here are few other nice things I saw while I was there: I love visiting Habitat homes because overall, they’re doing such a great job, and in some places, like these homes in Mt. Airy, NC, the work is stellar. They didn’t get everything right—almost no one does—but it’s wonderful to see the attention to detail I saw last week in these homes. With an organization like Building Performance Engineering coming in to do the testing and verification of their work, the few things that weren’t done right the first time end up getting fixed.

Kudos to Greg Russo and the Mt. Airy Habitat for Humanity affiliate!

The difference between Habitat and regular builders Here’s the thing, though. When you say a home is affordable, that really should include operating costs. Since Habitat is a nonprofit organization, and their mission is solely to help people, they can and must focus on the whole picture. Unlike like regular builders, they’re not driven mainly by what their costs are while they’re building. Yes, upfront costs are definitely important to Habitat, and not every regular builder cares only about their bottom line. In general, though, Habitat does a better job of taking the long view than the majority of homebuilders. With their emphasis on high-performance homes, they’re bringing their vision—a world where everyone has a decent place to live—to reality.

They’re also constantly looking for ways to make their work better. One of the big issues with small, high-performance homes is HVAC sizing. Tiffani Irwin signed up herself and 4 other Habitat folks for our webinar on mini-split heat pumps in August because they’re looking at how to do this right. (We’re doing a followup webinar on mini-splits on 10/23.)