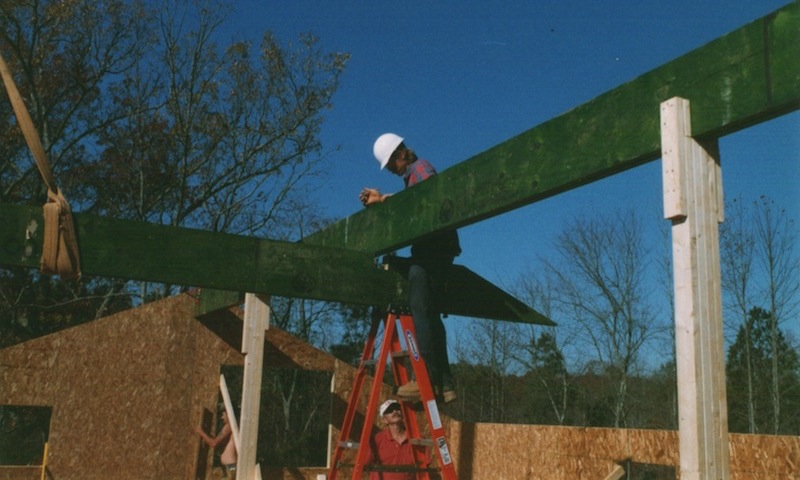 Ten years ago, I was at the front end of building a green, high performance home. (That’s me on the ladder connecting the two LVL ridge beams that support the structural insulated panel roof.) It was going to take only about two months from the time we got the foundation until we’d get our certificate of occupancy. And for nearly two years, that finish line stayed two months away, so I like to tell people that I built that house on the power of self-delusion.

But delusion isn’t what I want to talk about today. I’d like to tell you about one of the big lessons I learned—over and over, as it turns out—during the process of building that house: Do things in the right order.

I don’t remember all the painful ways that I had to learn this lesson, but here are a few:

I’m sure I learned to count even before I learned to read, but somehow I had to learn it again when I was building. When you do step 2 before step 1, you’ve got two options:

Thorough planning ahead of time is the key, something I didn’t do ten years ago because everything was moving too quickly. Your planning needs to be based on knowledge and experience of construction practices and building science, more areas that I was deficient in at the time. (I’d never built anything bigger than a bookcase before I took on this project.)

Finally, you have to assign tasks to the proper trade contractors and schedule them at the right time. Sometimes you need to give a particular task to someone who doesn’t typically do that job. For example, once the house is framed, the plumber comes out and roughs in the bath tubs and shower units. If they’re on an outside wall, someone needs to make sure the wall gets insulated and sheathed before the tub goes in, and having the insulation contractor come out for this small job may not make the most sense. Many homes have cold bathrooms because home builders used to ignore this issue, and there’s no insulation at all behind the tub.

Once again, the big lesson here is to plan ahead and do things in the right order. It’s easier. It’s cheaper. And you’ll have a better house when you’re done. This rule applies whether you’re building a new home or fixing your existing home.