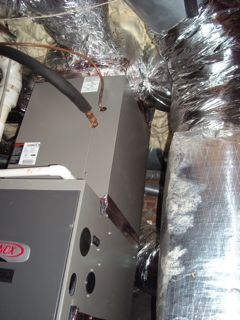 When I first looked at this house, the duct system was one of the worst I’d seen, and I recommended that the homeowners rip everything out and start anew. The correct way to do that, of course, is by going through the complete HVAC design process: Manual J, S, T, and D. That way, the equipment would be sized properly for the heating and cooling loads on the house, and the duct system would be properly designed to move the air efficiently. and 92+ AFUE furnace) and a typical duct system. What’s there now is definitely better than what they had before – How could it NOT be?! – but their overall efficiency is brought down by the duct system.

The first thing to notice is that the supply plenum is almost nonexistent because it’s so small. That’s not so good for air distribution. A bigger plenum is better, so you can get the right amount of air going out into the ducts attached to it. The small plenum also means that the ducts are attached right at the edge of the end cap. is in a dug out part of a crawl space that had flooding problems before the work, and there’s evidence that the dug out area has flooded since, too (orange dirt on top of the black plastic in photo at left).

The radial flex duct system with a lot of Y-splits, as installed in this home, is the most common method of installing ducts these days because it’s easy and doesn’t require much thinking. It can work out if the system was designed and installed properly, and the static pressures and air flow are where they should be, but 99% of the time you see this type of duct system, it was installed on the spot without prior duct design.

In this duct system, the flex ducts were squeezed through several tight places (between pipe and floor in photo below right), which is an unfortunate procedure for duct installation that can drastically reduce air flow. There also was precious little mastic used to seal the ducts. What I saw was thin and incomplete, the kind of duct sealing you see when the contractor doesn’t have to meet any kind of duct leakage threshold. that the new ducts are a lot bigger than the old ducts, and there’s a chance that the air flow may be OK. It’s certainly got to be better than it was before – though that’s setting the bar pretty low.

I didn’t measure air flow, static pressures, or duct leakage in this system, but the new system is definitely a great improvement over their old ducts. With the open cell spray foam insulation in the floor, the house can’t help but be more comfortable and efficient, and the homeowners are happy with the improvements.

My big problem with this whole scenario, however, is that the homeowners paid a lot of money for super high efficiency equipment and got an average duct system with it. They would have been better served by spending less on the heating and cooling equipment – the box – and more on the duct system.

Looking through the photos I took this week, I found another one that I really can’t omit. What you see at left is the filter, filter housing, and return plenum. Notice the red dirt all over them. That’s from the flooding that happened in the past. So, the HVAC contractor installed a brand new super duper high efficiency piece of heating & cooling equipment with a not so great duct system – and then he throws the same old dirty filter housing and return plenum on it, too. Did he even bother to put in a clean, new filter? Amazing!