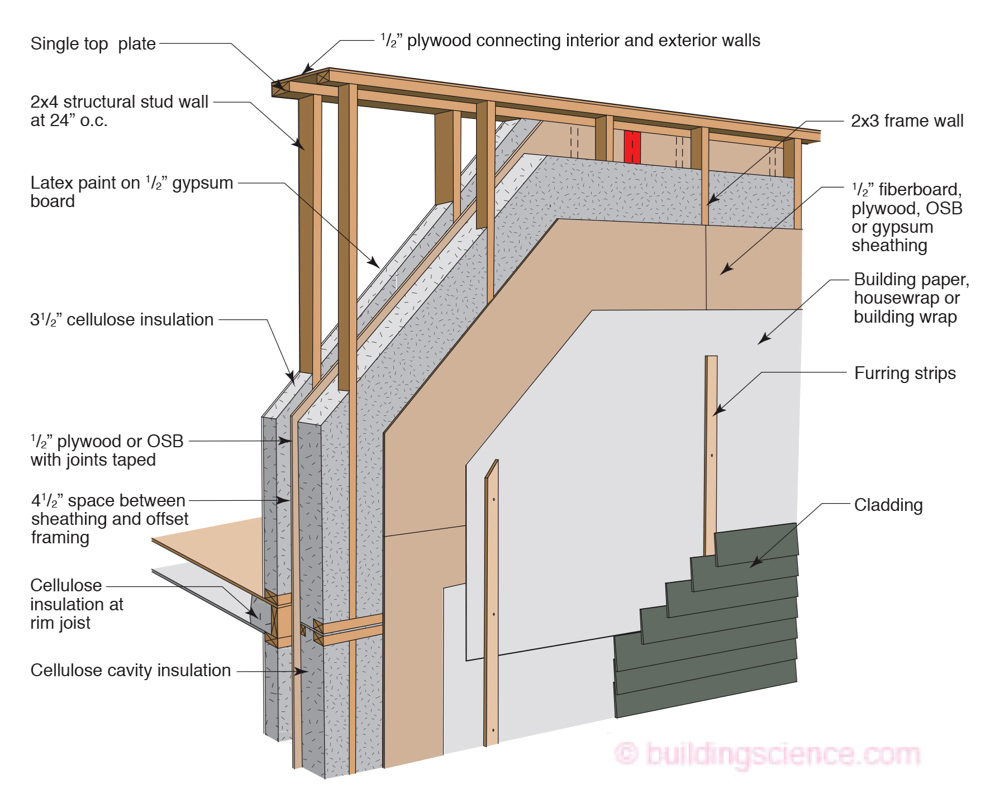 Joe Lstiburek called me last week to set the record straight. I had written an article about a study of moisture in double-stud walls in a Massachusetts home, and his company, Building Science Corporation (BSC), had done the research as part of the Building America program. They found elevated moisture content in the cold, exterior sheathing, and Joe wanted to make sure everyone knew, “I would never build that wall because I consider it too risky.”

The reason he called is I that I hadn’t done my job as a journalist. Of course, I’m not really a journalist; I just play one in this blog. But that doesn’t absolve me from the duty to dig deeper, especially when I ascribe a conclusion to a person when that conclusion came from third party sources. In this case, the conclusion was that buildings are more robust than we give them credit for, a statement I had initially ended that article with.

Because of that conclusion and because I hadn’t made it clear that BSC only monitored the project, some readers had the mistaken impression that BSC had at least endorsed, if not designed, that double-stud wall. As mentioned above, Joe considers that wall too risky, and the excessive moisture content in the exterior sheathing confirms his misgivings. Although the sheathing wasn’t damaged when they deconstructed the wall sections after three years, the amount of moisture they saw during winter and spring was a concern.

“None of this is unknown,” Joe told me. “None of it is a surprise. None of it, which is why on our website, we recommend don’t build this wall; build ’em this way. (See diagrams above and below.)

The problem is the lack of adequate vapor control. Both cellulose and open-cell spray foam, the two types of insulation they looked at, are Class 3 vapor retarders (1-10 perms). With lots of insulation in the walls, twelve inches in this study, the exterior sheathing stays colder. Cold materials are generally wetter than warm materials.

The diagram at the top of the article shows Joe’s ideal double-stud wall design. (For more details, see High R-Value Wall Assembly: Double Stud Wall Construction on the BSC website.) It’s got two layers of framing, which is why it’s called a double-stud wall or double-wall construction, but there’s an important difference between his wall and the one in the BSC study. He specifies a layer of OSB or plywood on the outside of the inside wall when using an air permeable insulation like cellulose or fiberglass.

Some builders in cold climates put a layer of 6 mil polyethylene inside a double-stud wall instead of the OSB or plywood that Lstiburek prefers. I asked Joe for his thoughts on that technique: “In terms of the physics, it’s great. In terms of practicality, it’s a very fragile way of doing things. That’s why I like sheet goods. We did this in the early ’80s and it was difficult to build.”

On the exterior of the wall, he specifies a vented rainscreen to aid drying. The first diagram shows furring strips, but any method that provides at least a 3/8″ gap should work. A ventilated cladding, like vinyl siding, would also work.

Lstiburek’s ideal double-stud wall has all the thermal, air, and vapor control that it needs to make the wall perform well and avoid moisture problems. “I think the walls that I’m recommending are not risky, regardless of whether we’re talking about interior or exterior moisture,” Joe said.

According to Lstiburek, the current hullabaloo over double-stud walls is a distraction: “Here’s what’s frustrating about this: We figured all this stuff out thirty years ago!”