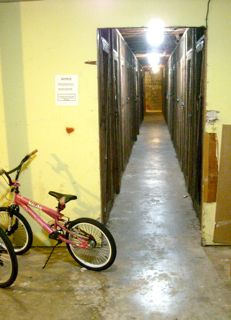 This could apply to any number of basements, but in this case I’m actually talking about the basement in the building I live in. The building has four units, two up and two down, on a full basement that’s used for storage for owners throughout the complex of 26 such buildings. Only two of the buildings have full basements, the others being fairly evenly split between crawl spaces and slabs. Earlier this year I wrote about the typical crawl space problems I found in one of the crawl spaces here.

Some of the problems I found in that crawl space also exist in this basement, and I’ll get to those later. First, let’s look into the reasons for that musty greeting I get every time I open the basement door. I’ve been in this community since 2008, and we’ve had discussions at more than one meeting about improving the two basements by using dehumidifiers. The problem with that is that it’s just impossible to dehumidify all the air in Atlanta, and with open vents to the outside, that’s essentially what we’d be trying to do. The other source of moisture in our basement air is what comes through the foundation walls themselves. Fortunately, we don’t have have any bulk water problems. There’s no water running down the walls anywhere and pooling on the floor. It’s just the smaller quantities that diffuse through the concrete and evaporate into the air. (In the photo here, the darker areas aren’t wet; they’re just discolored.)

So, we’ve got water vapor coming straight in through the crawl space vents as well as evaporating from the foundation walls. The result is high relative humidity, which causes stuff to start growing. Fortunately, it’s not bad enough that the wood is covered with microbial infestations, but it’s bad enough that the musty smell almost knocks you down when you open the door. It’s also bad enough for stuff to start growing on the piece of luggage shown here.

The bad air is a problem not only for anyone who visits the basement or wants to store stuff there but also for those of us who live above it. There are plenty of air leakage pathways for the air to find its way into our unit on the right side of the building and also into the other units, even the ones upstairs. One such leak is the bathtub hole shown here. The unwritten rule about the size of these holes is that they must be big enough to pass a six-pack down to the guy working below. Seriously, though, that’s a big hole, and we’ve got two of them, both allowing that nice, musty basement air into our condo.

In case you’re wondering why I, Mr. Energy Guy, haven’t sealed up those holes yet, this isn’t just a case of the cobbler’s kids having no shoes. As I’ve said many times, you can never make a house too tight, but you can have problems in a tight house. Before doing the air sealing, you have to make sure that you don’t cause problems like backdrafting your combustion appliances, which can put carbon monoxide in your home. We do have an atmospheric combustion furnace and water heater, so I’ve held off on doing any air sealing until I deal with those things first.

In case you’re wondering how much air actually passes through a hole like that, here’s a photo of the fiberglass insulation that was covering the hole. See how black it is on the edge? That’s dirt, a telltale sign of air leakage, and it indicates that a lot of air went across and through that fiberglass.

Speaking of fiberglass batts, they have their share of problems, too. As usual, they’re losing again in their battle against gravity. Can we just admit that installing fiberglass batts in a floor is a stupid idea and never do it again, please!? It doesn’t work for very long, even in the best installations. In most cases they hardly help at all. In our case, they do absolutely nothing!

Yes, some of them fall out, as shown at left, but the more pernicious problem is that they’re not aligned with the air barrier, which is the subfloor in this case. The photo below right shows a good example. We’ve got 2″ x 8″ floor joists, with a depth of 7.25″. The R-7 fiberglass batts are only about 2″ thick. (R-7? Really?! Why bother!) You can see in the photo below that these batts don’t come anywhere close to touching the subfloor, and that’s how they’re installed in just about every cavity in this floor.

If you use insulation that doesn’t stop air movement and it doesn’t touch the air barrier, air moves through or around it, rendering the insulation useless. This is most commonly found in floors, as you see here, but I’ve also written about a case where a brand new house had an insulation-air barrier alignment problem. In that article you’ll find a fuller explanation of the problem, too.

Finally, if you recall my Halloween article on the scary stuff you can find in your home, you know I’m a fan of critter stories. Although I haven’t seen any snakes or possums in this basement (yet!), I did get a little whiff of what may have been a dead animal down there today. I also saw a hole in the foundation wall that someone attempted to seal with fiberglass, and it had two nice, symmetric holes through the middle, almost like some little rodent has been using it as a passage way between inside and out. I’m not sure if that’s what’s going on here, but it looks suspicious.

So, there’s an overview of the problems with the basement in my condo building. I’ve also written about the solution I’m proposing that will make this a much better space for the people in our community to store their stuff as well as more healthful for the people living above. Here’s the link: