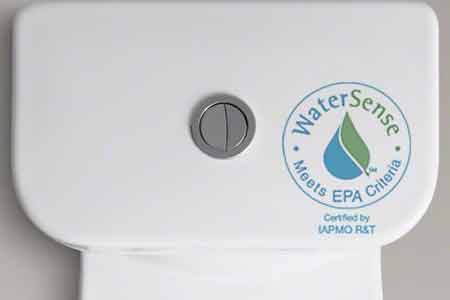 If you’ve been reading this blog for any length of time, you’ve no doubt heard of a HERS rating. It stands for Home Energy Rating System, and it includes calculations that produce a HERS Index, a number whose main reference point is 100. The lower the number, the more energy efficient the home. A HERS Index of zero would be a net zero energy home.

Likewise, the WERS stands for Water Efficiency Rating Score1 and has a 0 to 100 scale, with lower numbers being better. Created by the Green Builder Coalition in cooperation with Build Green New Mexico (BGNM), Santa Fe Area Home Builders Association (SFAHBA), and members of the City of Santa Fe Water Conservation Committee (SFWCC), the WERS is a software-based program that tells you how efficiently your home uses water.

You may be wondering why they felt the need to create this when the US EPA already has a water efficiency program, WaterSense. There’s a big difference between the two, though. WaterSense is actually two things. First, it’s a label for products like toilets and faucets, similar to the ENERGY STAR label for things like computers and refrigerators. Second, it’s a program for new homes. (Check out program details at the WaterSense website.)

So, the WaterSense new homes program is based on a checklist. WERS is a rating system, similar to HERS.

The New Mexico folks have done a lot of work to put this rating system together, and it’s in the pilot stage now. The inputs and calculations are done in a spreadsheet (see screenshot below), and it’s not that difficult to use. In fact, it’s easier than doing a home energy rating because you have a lot fewer inputs. In the screenshot above, which is one of several tabs in the WERS spreadsheet, you can see the inputs needed for the calculation. For toilets, faucets, and other indoor water appliances and fixtures, you enter the water consumption rate. The spreadsheet then calculates the water savings for each one compared to the industry baseline and prescriptive path requirements for water efficiency programs.

Currently the WERS includes only indoor water use, but it can be reduced by reusing greywater or rainwater. There is a checklist, however, for outdoor water use, and the plan is eventually to incorporate it into the WERS, too.

But doesn’t a HERS rating include water?

The short answer is no. Not like the WERS anyway. Yes, a HERS rating includes hot water, but it’s only the energy use associated with it. And it doesn’t include anything about water use in toilets, faucets, and other water fixtures. The HERS rating is just about energy.

But it’s not a WERS.

One of the best things about the WERS is the 0 to 100 scale. As with the HERS Index, it gives builders, home buyers, and anyone else who’s interested a way to compare houses. Kim Shanahan is Executive Officer of the Santa Fe Area Home Builders Association and one of the people responsible for making WERS a reality. “The zero to 100 scale of the WERS program plays right into the competitive nature of builders and the marketplace,” he said.2

The fledging program in New Mexico is off to a great start. There’s a lot of interest in it there, and they’re also having discussions with the EPA and others about taking it national. I think you’ll be hearing more and more about WERS in the coming years.

1. There’s one thing I wish they had done differently, though. WERS stands for Water Efficiency Rating Score. (At least that’s what it is in most places I’ve seen it defined.) What that means is that it’s going to become the next Grrrrrrrrrr-inducing term like ATM, PIN, and ECM because everyone is going to want to say WERS score the way they say ATM machine, PIN number, and ECM motor. I’m feeling it already. Grrrrrrrrrr!

2. Yes, “he.” Kim is a perfectly respectable man’s name. Which reminds me: In case you haven’t heard, I’ve started a new movement to get parents to reclaim names that were traditionally boys’ names but which have since been co-opted by girls. Come on, parents! Don’t be afraid to name those boys Allison or Kim or Kelly or Mary Ann. Well…maybe not Mary Ann, but did you know that John Wayne’s original name was Marion Robert Morrison?