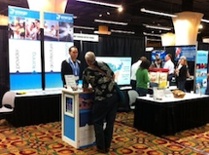 In case you aren’t aware, the Passive House concept began in Germany, and the idea behind it is to beef up the building envelope so much that the heat that flows into or out of a home is extremely small. And I do mean small. They like to say that the heating load can be so small you can heat your home with a blow dryer.

In fact, they have a limit for the heating load that a Passive House must be below: 4,750 Btu per square foot per year. A 2000 square foot house, then, would need to have a heating load less than 9.5 million Btu per year, which could be met by a 1500 Watt blow dryer running for 77 days. By contrast, a typical furnace with an output capacity of 60,000 Btu per hour would run only 158 hours, or less than a week. Those numbers for heating include the heat that comes from the Sun (solar gain through the windows), appliances, and the people in the house.

The Passive House standards are really strict. To qualify, a home must have a measured infiltration rate no higher than 0.6 air changes per hour at 50 Pascals (ACH50). They also require super good windows, mechanical ventilation, and no thermal bridges. Martin Holladay wrote a nice summary a while back called Passivhaus for Beginners.

I first heard of Passive House about five years ago and loved the idea of reducing the loads so drastically. You invest up front in the building envelope and then you benefit for the life of the house. When you look at cost effectiveness, however, sometimes it may be better not to improve the envelope so much and instead add photovoltaics. There’s been a lot of discussion about this program over the past few years, and the Passive House Institute of the US last year split from the German PassivHaus Institut, creating even more discusssion.

Back to my original point, the PHIUS team at RESNET, John Semmelhack and Katrin Klingenberg, were there for three main reasons. First, they went to the RESNET Technical Committee meeting on Saturday to discuss using the HERS software for Passive House projects. Second, they had a booth at the trade show. Third, they taught a two-day class for HERS raters who want to work on Passive House projects because PHIUS is going to use HERS Raters for the quality assurance.

One of our raters, Diane Milliken of Horizon Maine, took the class because of the growing number of projects she’s being asked to work on in Portland, Maine. I didn’t get a complete rundown on the class from her, but she went to the conference not knowing if she would sign up for it or not. I introduced her to John, and after discussing it with him, decided to jump in. When it was done, she was happy with her decision and especially enjoyed the field trip they took to see a Passive House project in Austin. For more on what they did at the conference, see their RESNET 2012 Recap in today’s Klingenblog.

There’s a lot to say about Passive House, so I’ll be writing more here this year. One of the big questions, at least from my mixed-humid climate zone perspective, is, how well does the program work in warmer climates? Stay tuned.