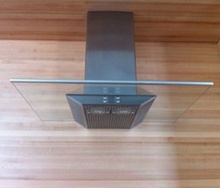 You’d never settle for a recirculating toilet, would you? Press the lever and everything in the bowl just swirls around and around. Never leaving, just recirculating. That’s the image Professor John Straube painted for us last week in his talk at the Building Science Experts’ Session. He was discussing range hoods and indoor air quality (IAQ).

You’d never settle for a recirculating toilet, would you? Press the lever and everything in the bowl just swirls around and around. Never leaving, just recirculating. That’s the image Professor John Straube painted for us last week in his talk at the Building Science Experts’ Session. He was discussing range hoods and indoor air quality (IAQ).

Think about it. You’re cooking for the holidays. A pot is sitting on one of the burners with no lid, vapors rising from it into the air. You turn on another burner to sauté some onions and something that spilled onto the burner another time starts burning off, creating a little bit of smoke. You’ve got a turkey going in the oven. The kitchen’s getting a little warm and steamy, so you turn on the range hood.

It’s making noise. You know the air is moving because you feel it hitting your forehead. But is it really helping to clear the air? No! It’s taking air from the kitchen and putting it back into the kitchen. Yeah, it may capture some of the grease and odors in that little metal mesh filter, so that may explain the acne on your forehead.

But it’s not really doing much to help your indoor air quality. To accomplish that, the range hood has to pull in air from the kitchen and send it outside.

Why do you want a range hood that vents air to the outside? Let me count the ways:

How can you tell if your range hood is vented? The photo above shows the cabinet niche where a range hood goes. Since this builder also installed ventless gas fireplaces, I imagine that they installed the range hood right in that spot without first cutting a hole for the duct to vent the air to the outside. Sometimes you can tell if your range is vented to the outside by opening the cabinet doors above it. The photo below shows a duct running through that small cabinet. It’s possible, though, that the range hood is vented straight through the wall to the outside. To tell if that’s the case, go outside and look at the wall to see if there’s a wall cap to allow the vented air to escape. Of course, if the range hood isn’t mounted on an outside wall, it probably wont’ be vented like this. (I say ‘probably’ because there’s a lot of weird stuff out there in existing homes.)

If you can’t find a duct anywhere, and you feel strong air flow from the front of the range hood when you turn it on, it’s probably a recirculating model.

Venting to the outside is just the beginning

Yes, you certainly want a range hood that pulls air in and sends it to the outdoors, but there’s a bit more to it than that. You also want to make sure you’re capturing enough of the air, so you need a hood that actually covers the range. If it doesn’t, you can use the back burners to get better ventilation.

You also want to make sure it’s really moving air. This is one of the requirements in version 3 of the ENERGY STAR new homes program. The HVAC Quality Installation Rater Checklist requires the home energy rater to measure the air flow of the range hood to ensure that it’s pulling at least 100 cubic feet per minute. If you’ve read my article on air flow in bath fans, you know that there can be a lot of problems that reduce air flow.

For an excellent overview of the problems with range hoods, see Carl “The Green Curmudgeon” Seville’s article at Green Building Advisor on the topic from earlier this year: Why Range Hoods Don’t Work.

Don’t Let the Turkey Get You Down! Carbon Monoxide Alert