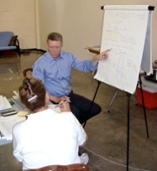 Yesterday, our first HERS rater class students had their first shot at the national HERS rater test. I’m happy to report that 100% passed the test, and the high score was 98%.

Yesterday, our first HERS rater class students had their first shot at the national HERS rater test. I’m happy to report that 100% passed the test, and the high score was 98%.

If you read my earlier article about the difficulty of the HERS rater test, you know that many students don’t pass it on their first attempt. It’s a hard test, which it needs to be, and many HERS training providers try to squeeze too much material into too short a time.

Here’s what I attribute our success to:

In home energy rater training classes that last five or five and a half days, the national HERS rater test is usually the last thing the students do. All week long, they’re hearing about the test, and the pressure builds. They know that as soon as they’re finished, they’ll pack up and go home, so the pressure is great to pass the first time.

In our class, the students still feel pressure because they want to be done with it after their first try, but they know that if they don’t make it the first time, they’ve got two more shots – at no extra cost. That knowledge acts as a pressure relief valve, and that’s pretty important because some people tense up during a test, and extra pressure only makes it worse.

The way we’ve structured our class, the students take the test at the end of the fifth day. During those five days, we mainly focus on the building science, pressure testing, and HERS protocols that they need to pass the test. We do some work with the software, starting on the first day, to get them familiar with it, but most of the training for REM/Rate happens in the last three days.

We also went out into the field twice in the first five days and visited three houses. On the first day of class, we did a walk-through of a house under construction and then a full field inspection with pressure testing of an existing home. On the fourth day, we went out and the students got practice with the Blower Door and Duct Blaster.

This is only our first class, although it’s the 20th time over all that I’ve taught a HERS rater class. I don’t know that we’ll get 100% passing on their first attempt every time we teach the class, but I think my goal to have 100% pass rate by the end of each class is realistic.