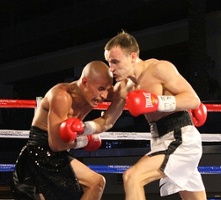 Today, I’m making noise for a fight that broke out over the topic of residential ventilation. This is a real fight among two heavyweights in the home performance industry: John Krigger of Saturn Resource Management and Paul Raymer of Heyoka Solutions. Don’t worry; it’s not a Jon Stewart/Tucker Carlson kind of fight or something you might see on the Jerry Springer show. These guys respect each other and even teach classes together.

Krigger opened the fight last week with a roundhouse punch aimed at ASHRAE and the latest versions of their residential ventilation standard. “ASHRAE 62.2-2010 is a confusing jumble of requirements and choices that has wasted vast amounts of time and money in training personnel and coping with confusion,” he wrote. Krigger doesn’t like that so much time and money is being spent in the home performance and weatherization industry to train people on this standard. Now it’s about to change again with the 2013 update, “which will be different and lead to another cycle of confusion and wasted resources,” according to Krigger. He believes there’s no reason to move away from the 62-89 version because it’s much simpler. In addition, he claims that the assumptions on which they’ve based the changes in the standard are questionable and lists four problems at the end of his article. I’ll let you go read them and decide for yourself, but I will mention one here. He wrote that, “There are millions of respiratory problems relating to a lack of ventilation.” When I posted a link to the article on LinkedIn, Bobby Rhett, an Industrial Hygienist in the Washington, DC area, replied, “We may not always have the source of asthma pinned, but there is evidence that improving ventilation improves asthma outcomes.”

In the other corner…

Raymer responded with a jab, aiming to connect quickly and thus take some of the impact out of Krigger’s blow. His article, titled, Don’t Blame the ASHRAE 62.2-2010 Standard, disputed Krigger’s claim that ASHRAE moved away from simplicity when they revised the standard from their first version, 62-89. That early version, he wrote, was 26 pages and the 2010 standard is only 14. “The ASHRAE 62-89 Standard is no longer supported by ASHRAE partly because of its complexity,” Raymer explained.

He then went into some of the details of the two versions of the standard, offering a nice contrast between how they really work. One important point that many in the home performance and weatherization field probably don’t know is that, “there is nothing in the 62-89 Standard about calculating a Building Airflow Standard, Building Tightness Limit, Minimum Ventilation Level, etc.” Those terms come from the programs that reference the standard.

How many rounds will it go?

In case you don’t know who they are, both Krigger and Raymer are heavyweights in this field. Krigger is the author of the book Residential Energy, which is used, I imagine, in nearly every building analyst and home energy rater class in the US. Raymer is the author of the book Residential Ventilation, which covers the whole topic extensively. He’s also on the committee that decides what goes into ASHRAE 62.2 and issues the new version every three years.

How we ventilate homes is a big deal and far from settled. ASHRAE 62.2 is leading the way, but as you can tell from this fight, there is pushback from some of the people who have to apply the standard in the field. The Building Performance Institute (BPI) was supposed to drop 62-89 and adopt 62.2-2010 this month but released a statement on 28 December announcing they’d postponed that change.

Both of these guys make good points, but I have to side with Paul on this issue overall. I think BPI should have dropped 62-89 long ago, and to keep postponing it only makes it worse, as more people get trained on an obsolete standard that was created in the 1980s. John definitely makes some good points, and I think we can do a better job of considering the training aspect of applying standards. Part of that falls on the organizations that adopt the standard, too. Paul’s basically right, though, that we need to go with the newer version. Yes, it needs work, but the three-year cycle is getting us there.

This is an important battle in the Building Science Fight Club. It’s not just a bunch of sixth graders banging shoes on the ground to get attention. We need to ventilate homes to improve indoor air quality, and we need to be able to do it cost-effectively. Debate and discussion are healthy, and we need to keep it going. I’d love to see John and Paul do an evening session at the RESNET conference this year and continue this debate.

I’ll give the last word in this stage of the debate, though, to Albert Einstein, who once said, “Everything should be made as simple as possible, but not simpler.”

Breathe! – Get Fresh Air into Your Home with ASHRAE 62.2