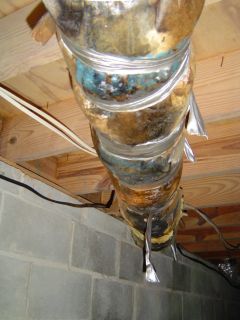 Rod had a major duct failure going on in his crawl space. It was summertime when I visited and took the photos you see in this article, and the ducts had four serious problems that robbed his air conditioner of cooling power and created moisture and mold problems in his crawl space.

There’s a good reason why insulation that’s sold for use on ducts is wrapped with foil or plastic, both impermeable to water vapor. You can see in the photo at left and the one below that the paper-faced insulation they used on part of the supply ducts was wet and moldy.

The kraft paper facing used on fiberglass batts is a Class III vapor retarder. It’s meant to slow the movement of water vapor that it might encounter in an above-grade wall, but even then it doesn’t get nearly as cold as the kraft paper facing on the ducts you see here because it’s installed on the warm-in-winter side. When you put this type of insulation on very ducts that get cold supply when the air conditioner is running, its vapor retarding ability is overcome by water vapor’s love for cold temperatures. Also, paper is a sorptive material. The water vapor doesn’t just flow through it. It interacts with the paper, which can suck up large quantities of water. Paper is also known as mold candy because the fibers are shorter and more processed than in wood.

Fiberglass batts intended for use in above-grade walls should NOT be used on ducts.

The second problem in Rod’s house was that the insulation on the ducts was inadequate in places where they used actual duct insulation. In this case it was foil-faced, but it was old and compressed. As you can see in the photo below, the temperature on the outside of the foil-faced duct insulation was below the dew point. Did I mention that this duct system was in a crawl space…in the Southeast…where dew points regularly go above 70° F? If the air running through those ducts is 55° F, it’s not hard for poorly insulated ducts to sweat like this.

Another section of cold supply The fourth problem was that a significant amount of their cold air was leaking out. It was an old hard-pipe system, and those are often the leakiest ducts I test. As you can see in the last photo above, there’s no kind of sealing at all on all those joints at the exposed elbow. I didn’t test this house because the homeowners didn’t want to pay for a full home performance assessment.

Did they fix it?

Unfortunately, I couldn’t convince the homeowners to address the duct problems. I suggested crawl space encapsulation, and they thought it was too expensive. I suggested just fixing the duct problems by pulling all the insulation off, sealing the ducts, and reinsulating them; they had a friend who could do that for them. The reason they called me out that summer day in 2005 was because they had a plumbing leak. I’m still not sure why they called me for that because they found me through a Yellow Pages ad, which was probably in the insulation section.

I hope they’ve done something about it since then and aren’t still suffering with higher air conditioning bills, too much humidity, and poor indoor air quality because of these duct failures. This would have been a great way to help keep their home cooler during the heat wave this summer when temperatures climbed well above our design temperatures.

9 Uncommon Tips for Keeping Cool with a Struggling Air Conditioner