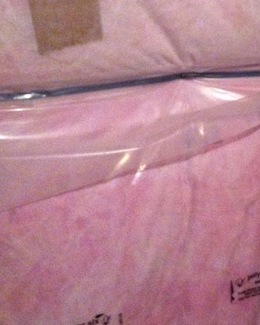 A lot of people have heard advice about vapor barriers and vapor retarders. Many of them have walked away confused. A big part of the problem, I think, is that they’ve been told what to do—”Put it on the warm-in-winter side,” or “Never use one”—but they haven’t had the physics of what happens explained to them.

In this article, I’m not going to get into the details of vapor barriers or all the possible scenarios of different wall assemblies and moisture loads. I’m simply going to explain what happens in a wall cavity with and without a plastic vapor barrier installed.

Plastic on the inside

I’m writing this article because one of our HERS raters came across a house in Charleston, SC that had poly under the drywall, on the interior side of the wall assembly. If you’re at all familiar with the climate in Charleston and understand moisture, you know that can’t be a good thing.

I was there one day in June a few years ago and saw condensation on the outside of a window…at 1 o’clock in the afternoon of a sunny day. The dew point of the outdoor air was 78° F. The window had a single pane of glass. They were running the air conditioner, so the indoor temperature was probably 75 or below. Humid air hits cool surface. Condensation results.

Now, imagine that pane of glass is actually a sheet of polyethylene. Next, imagine that a layer of drywall separates the poly from the indoor air. Then build a wood-frame wall outside the poly, complete with cladding and air permeable insulation in the cavities. Will that poly be protected from the outdoor humidity? Or will it, like the window I saw, be dripping with condensation?

If it’s a typical wall, chances are good that water vapor in the outdoor air will find its way into the wall cavity, eventually finding the sheet of poly, pressed up against the drywall. If that wall allows outdoor air to infiltrate and the poly is below the dew point, condensation is the likely result. If those conditions last long enough, the condensed water will run down the poly, get the wood framing wet, and begin to rot out the wall.

The truth, though, is that the water vapor in the outdoor air is rarely the source of moisture that rots out a wall. More likely is that moisture from a wet foundation makes its way up into the wall by capillary action, or bulk water from leaks around openings gets into the wall cavity. The presence of an interior vapor barrier makes drying out the cavity harder to do, though.

Without poly beneath the drywall, water vapor hits the drywall and diffuses through to the drier (in summer) indoor air. By installing a sheet of poly there, you cut off that drying mechanism and water that finds its way into walls can stay there longer and do more damage.

In cold weather, a sheet of poly on the interior side of a wall probably won’t cause any problems. The humid air is indoors, and the dry air is outdoors. The sheet of poly still cuts off drying to the indoors, but it keeps the water vapor in the humid indoor air away from the cold surfaces inside the wall. This is what building scientists proposed as the solution for walls that wouldn’t hold paint back in the early days of insulation. It didn’t solve the paint problem, though, because water vapor from the indoor air wasn’t the main source of moisture.

Plastic on the outside

Plastic on the outer surface of a wall in cold weather could cause problems. The humid air is indoors. The cool surface is the sheathing, assuming no exterior insulation. If water vapor diffuses or infiltrates into the wall cavity and finds the cool surface, moisture problems can occur.

Of course, you can have moisture problems here even without the exterior vapor barrier because of what Bill Rose calls the rule of material wetting. That is, warm materials dry more quickly than cold materials.

It’s not just a climate issue

We can summarize the vapor barrier issue like this:

Understanding moisture is one of the most important aspects of making buildings do their jobs properly and not fail prematurely. We know now that mid-twentieth century building science incorrectly ascribed magical properties to vapor barriers. Water vapor from indoor air wasn’t the source of most moisture problems. Bulk water from deficiencies in drainage planes, flashing, and other moisture management details caused most of the problems.

Building science has progressed since then. We know that vapor barriers can cause problems, but we still have homes like the one in Charleston with poly in the walls. And we have $4 million dollar homes with poly on the walls, too. I saw the one below when Martin Holladay came to Atlanta last year. That’s in the basement, but the kneewalls in the attic also were covered with poly. Our understanding now is that it’s generally more important for wall assemblies to be able to dry than it is to block water vapor with materials like polyethylene. Here’s what Bill Rose wrote in his book, Water in Buildings:

“Given the fact that a very small percentage of building problems (1 to 5% at most in the authors experience) are associated with wetting by water vapor diffusion, the argument for enhanced drying potential becomes much stonger.”