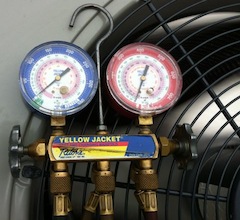 Here’s another compelling reason for contractors to own duct testers: The ENERGY STAR new homes program now requires the duct leakage test to be done at the final inspection, not rough-in. With Revision 06, Footnote 17 in the HVAC System Quality Installation Rater Checklist says:

Duct leakage shall be determined and documented by a Rater using a RESNET-approved testing protocol only after all components of the system have been installed including the air handler, the ductwork, the duct boots, and the register grilles atop the finished surface (e.g., drywall, carpeting, flooring).

And just in case that isn’t clear enough, they wrote this in the Revision 06 Highlights:

To clarify, duct leakage testing must occur when the duct system is in its final state, which is to say after all components of the system have been installed including the air handler, the ductwork, the duct boots, and the register grilles atop the finished surface (e.g., drywall, carpeting, flooring). A leakage test at “rough-in” does not meet this intent, though may be helpful for identifying leaks that need sealing. [Emphasis added.]

I think this is a great change in the program because I’ve always had a problem with using a rough-in duct leakage test as the final result, which many HERS raters have done. Testing at rough-in is a great idea because you can catch problems before they become much more difficult and expensive to fix. Once the drywall goes up, access becomes a big issue. But as ENERGY STAR now realizes, a rough-in test is not good enough to use in a home energy rating.

Back to the original question now, why don’t more HVAC contractors own duct leakage testers? If they’re installing ducts, they really should ensure that the ducts have been intalled and sealed properly. If a third party’s going to come in when the house is complete and test for duct leakage, it only makes sense for the contractor to test at rough-in so they know they’ll pass at final.

I realize that there’s a lot of pressure on HVAC contractors working in new construction to keep their prices rockbottom. Now, with building codes raising the standards, they’re being pulled in the other direction, too. It’s almost like homebuilders and code officials are doing an experiment to determine the tensile strength of HVAC contractors.

I’m not an HVAC contractor, but if I were, I’d definitely own a duct leakage tester. They’re not really that expensive, as the prices have come down significantly in recent months. TruTech Tools is selling them for a little over a thousand dollars. Just 3 years ago, I bought one for nearly two grand.

Some people call me a purist because of my stands on issues like this. I guess I am, in a way. I also believe in following Steve Martin’s advice: In this changing environment for HVAC and homebuilding, you’ve got to be good.