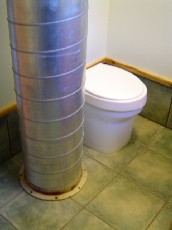 Ten years ago I was building a green home. It had passive solar features, was built out of structural insulated panels, sent all the greywater out to the back yard to water fruit trees, and was going to be super energy efficient. One feature above all others, though, captured people’s attention when I described the house to them — the composting toilet. The first reaction of many of them was:

A lot of people are down on negativity (Say NO to negativity!), but actually it’s a good thing when channeled properly. Negative pressure inside a composting toilet means you never have to worry about walking into a bathroom that’s had all the oxygen sucked out of the air (as I heard it described once).

OK, composting toilets are about a lot more than bathrooms that don’t stink. The main reason that people who consider themselves environmentalists install them is to prevent problems associated with waste treatment plants and septic tanks. In this age of ‘going local,’ they keep the organic matter at home (unlike a sewer system) without polluting the ground water (unlike many septic tanks).

But let’s skip over all the big picture, environmental stuff. If you’re considering a composting toilet, you want practical information, so here’s my advice to you, based on the three years I spent living in one…uh, I mean living in a house with one.

Don’t get a small one. You know, the kind that’s an all-in-one unit that just sits on the floor in any bathroom. It has a small tray at the bottom that you slide out to remove the waste. I had some friends in Florida who had one, and they hated it. You have to empty it far too frequently, and it doesn’t really get enough mass to get the composting going. And unlike the one I had, they’re smelly.

Use compost starter. When you read the instructions for composting toilets, they tell you that you have to put some starter microbes in the tank to make the composting happen. They give you two choices: Buy their special starter or throw a shovelful of soil in the tank. We chose the latter and had a plague of little fungus gnats living in the tank. (I could write a whole article just about my battle with those annoying little critters.) I suspect that using the soil from outside was the source of our gnat problem.

Consider a foam-flush or micro-flush toilet. Some people are squeamish about doing what comes natural into a tank where they can see that other people have also been doing what comes natural. Crazy, I know, but it’s true. These types of toilets also give you the flexibility to install the toilet in locations other than directly above the tank.

In case you’re wondering, we went with the Phoenix composting toilet by Advanced Composting Systems in Whitefish, Montana. The owner had previously worked for Clivus Multrum, the big name in composting toilets. I was pleased with the design, sturdiness, and functionality of the toilet. It was also fairly easy to assemble and install (for someone who’s handy with tools and used to doing this kind of stuff, that is). I recommend checking out both of those brands.

If you’re in the Atlanta area, you can check out the Clivus Multrum with a foam flush toilet at Southface Energy Institute’s Eco Office near downtown.

Because the tank was so large and there were only two of us living in the house (for the first three years anyway), we didn’t have to empty the tank until it had been in use for four years. At that point, I wasn’t living in the house anymore but went back to help with the first removal of the compost in 2007.

It was nice stuff! The Phoenix has two access doors, an upper one and a lower one, as well as two large axles that run the length of the tank, each with several tines. When you open the lower door, you can pull out all the old stuff from the bottom and the axles and tines keep the newer stuff from falling. Cool!

Finally, for those of you who think these modern composting toilets are too fancy or expensive, I recommend The Humanure Handbook. I don’t think you’ll ever get their design approved by a building department, but it’s definitely low-tech and cheap. All you need is a 5 gallon bucket, a toilet seat, and some sawdust.