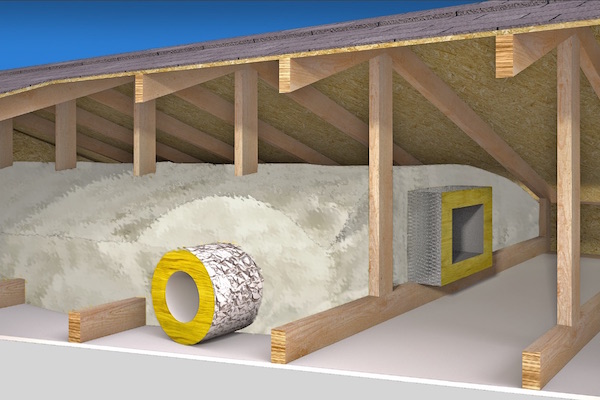 Are you confused? In my last article, I said buried ducts are at risk for condensation. Now I’m telling you they’ll be allowed in the 2018 code. What’s going on here? The answer is simple. Yes, when you bury ducts in attic insulation in a humid climate, you increase the risk of water vapor condensation on the jacket of the duct insulation. But in my last article, I also showed you some preliminary results from a research study on buried ducts in a hot humid climate. They found R-8 duct insulation was sufficient to prevent condensation. Now, let’s see what the 2018 versions of the International Residential Code (IRC) and International Energy Conservation Code (IECC) will require.

Through the 2015 versions of the IRC and IECC, the codes haven’t said anything about buried ducts. They’re not prohibited, but there’s also no guidance on how you would design and install them if you wanted to try it as an alternative to bringing the ducts into the conditioned space or moving the building enclosure to the roofline with spray foam. But that’s now changing as the 2018 I-codes have addressed the issue for the first time.

How are the ducts treated in energy modeling?

But of course there’s more. Once we put the ducts down into the insulation, other questions arise. Here are the two relevant to this discussion:

The answer to both of those questions is yes, but only with more rigorous requirements. Let’s look at them separately.

Deeply buried ducts. The first question leads to what is called “deeply buried ducts.” They get this designation if they (1) are no more than 5.5″ above the drywall, (2) have at least R-30 on either side, and (3) covered with at least 3.5″ of insulation (on top of the R-8 or R-13 duct insulation). If they meet all three requirements, then you can enter R-25 as the effective duct insulation in load calculations and other energy modeling.

For more detail on the new buried duct requirements, be sure to check out the TechSpec titled HVAC Ducts Buried within Ceiling Insulation in a Vented Attic (Buried Ducts) (pdf) on the topic published by the Home Innovation Research Labs.

Since so many homes are built with ducts in the attic and blown fiberglass or cellulose insulation on the ceiling, this new option may appeal to some builders. We know that putting ducts in unconditioned attics is stupid from an energy perspective. But we also know that a builder will absolutely get a callback because of water spots on the ceiling whereas energy bills that are 20% higher than they might be with ducts in conditioned space just won’t register with a homeowner.

There are pitfalls here, though. Here are a few:

Any of those things could lead to condensation on the ducts. A strap around a duct compressing the insulation, for example, reduces the R-value at the strap. That lowers the temperature at the vapor barrier and may put it below the dew point.

Another way to bury the ducts in a humid climate is to encapsulate them with closed cell spray foam. The Building America program has done research on that method as well, and although I’ve been meaning to write about it for years, I haven’t covered it yet. I’ll try to get to that soon now that the issue of buried ducts is moving to the front.

As with just about every other part of construction, the buried ducts method will work fine if implemented properly. It could also lead to some major headaches if it’s not. We’ll see what happens if builders choose to try it.

Images from HVAC Ducts Buried within Ceiling Insulation in a Vented Attic (Buried Ducts), a TechSpec published by the Home Innovation Research Labs, used with permission