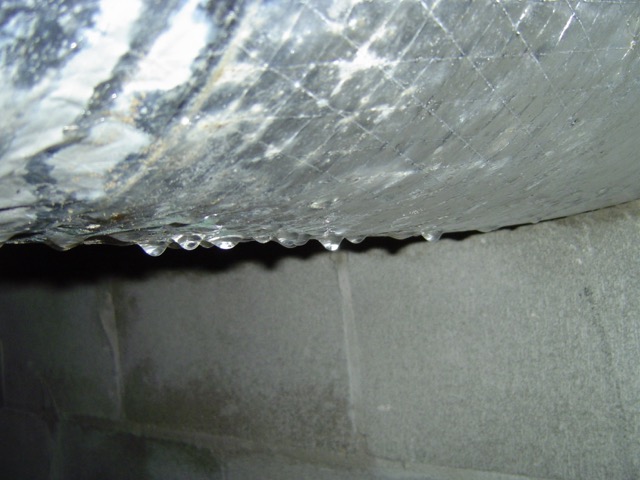 Water vapor from the air condenses on air conditioning ducts in humid climates. It’s as normal as poorly insulated bonus rooms making occupants uncomfortable or cigarettes causing lung cancer†. Condensation on ducts is most common in crawl spaces and basements, where the air is more likely to have a higher dew point. But it also happens in conditioned space and occasionally even in attics. That’s why you have to be careful about burying ducts in attic insulation in humid climates, especially in coastal areas. Since the 2018 International Residential Code (IRC) and International Energy Conservation Code (IECC) specify how to get away with burying ducts in humid climates, let’s take a closer look.

The problem with buried ducts

The potential for duct condensation is a humid climate, cooling season problem. My friends out west regularly bury their ducts in air permeable insulation (e.g., fiberglass or cellulose) and don’t worry about condensation. The air in the ducts may be as low as 55° F, but their summer dew points are usually below 50° F. There’s just not enough water vapor to condense.

In humid climates, that’s not the case. The photo above shows condensation on a duct in a crawl space in Hilton Head, South Carolina. Outdoor dew points can hit 80° F in the summer there and average in the mid 70s. With 55° F air moving through supply ducts, you’ve got to have well-installed insulation on a duct with significant R-value to keep the surface temperature above the dew point.

But if you bury that supply duct in fiberglass or cellulose insulation, which allow attic air to reach the duct’s surface, all bets are off. As you pile more and more insulation on top of the duct, the surface temperature of the insulation jacket (a vapor barrier) drops. As it turns out, ducts buried in ceiling insulation in humid climates do sometimes have condensation problems. If you live in a humid climate, especially locations near the Gulf of Mexico or Atlantic Ocean, you may now have the reason for those mysterious water spots on your ceiling. Maybe. They could also be from roof leaks.

What the research says about buried ducts

Well, that sure sounds reasonable, but is it confirmed by what actually happens and by research? A Building America paper from 2016 titled, Compact Buried Ducts in a Hot-Humid Climate House (pdf) has an answer for us. (Notice I used “an answer” there, not “the answer.”) Home Innovation Research Labs did a study on a buried duct system in a home in Lady’s Island, South Carolina (a bit north of Hilton Head). One of the main questions they wanted to answer was:

What is the minimum level of duct insulation to prevent condensation at the outer jacket of buried ducts in hot-humid and mixed-humid climates?

So they set up this model home with a buried duct system and installed a lot of sensors. The ducts had the standard R-8 insulation you find on attic ducts but then were buried in R-30 ceiling insulation. Here’s what they found:

Another really interesting thing they found was that the assumption I mentioned in the last section doesn’t seem to be warranted. Remember when I said that the dew point within the attic insulation is presumed to be the same as the dew point in the attic above the insulation? Well, that’s not what they found. The graph below shows two things: (1) The dew goes through daily cycles (similar to what I found in a spray foam attic in Atlanta), and (2) the dew point peaks decrease as you descend into the ceiling insulation and get closer to the drywall. This is good to know. Now, this is all good stuff, but it’s just a start. For one thing, the report is based on only one month’s data (August 2015). For another, they set this house up specifically as a test house and thus made sure to get as close as they could to their design conditions. (They did miss on duct leakage, though. Their goal was 1 cfm25/100 square feet of conditioned floor area and they hit 4 cfm25/100 square feet.)

It may well turn out that R-8 duct insulation is good enough for general use, but I’m not convinced yet. Neither, as it turns out, is the International Code Council. In my next article, I’ll explain the new buried duct requirements that make their debut in the 2018 IRC and IECC. Here’s one little teaser, though: The codes decided R-8 was good enough for most of the country but some climate zones require more.

† Both of my parents were smokers. Both died of lung cancer.