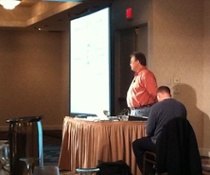 Spray foam insulation evokes some interesting conversation among building science professionals, those in construction, environmentalists, and homeowners who have it in their homes. Many think it solves all problems, no matter how poorly it’s installed. Some think it’s helping to warm the planet and compromise the health of people and pets. In the middle are those who work with it regularly and see both the warts and the beauty of the product.

Spray foam insulation evokes some interesting conversation among building science professionals, those in construction, environmentalists, and homeowners who have it in their homes. Many think it solves all problems, no matter how poorly it’s installed. Some think it’s helping to warm the planet and compromise the health of people and pets. In the middle are those who work with it regularly and see both the warts and the beauty of the product.

Building Science Corporation is hosting its annual Experts’ Session, and the first day was all about spray foam insulation, with a collection of people who are mostly in the third camp mentioned above. Joe Lstiburek spoke first and then brought in several experts to give us high level information on this product – everything from the basics of open cell versus closed cell to the latest work on blowing agents.

The other invited speakers were:

Joe began by talking about the Perfect Wall. That led quickly to what he calls the 500-year wall, for 3 reasons: It represents 500 years of evolution; it lasts 500 years; and it takes clients 500 years to pay for it. He went through some of the details he presented in his Perfect Wall paper on the Building Science Corp. website, discussing where to use foam, which foam works, and how not to do stupid stuff.

Of course, he also took his jabs. He called out ASTM at Summer Camp this year. Yesterday, he said that ASTM stands for Another Stupid Test Method. He also continued the anti-WUFI campaign I first heard at the Passive House conference in Denver. In discussing how you decide what vapor permeability you want in your materials, he said, “You guess. I’ll trust your guess better than a WUFI analysis. WUFI should only be done with adult supervision.” (WUFI is a modeling tool for moisture and heat transport through building assemblies.)

Mac Sheldon of Demilec gave a great talk titled SPF Retrofit Problems & Solutions. He discussed how controls have improved to the point where spray foam going off-ratio, while still possible, is becoming rare. He did show some of the problems that occur, including a scary photo of a box truck with the roof blown off because someone put water in the wrong drum. That drum ended up across the street.

Installer errors are the most frequent problems, and there’s been a concerted effort in the industry to improve in that area. Sheldon discussed the new accreditations and certifications that SPFA offers, and Rick Duncan went into a bit more detail about them. If you’re in the business of installing spray foam, get over to the SPFA website now and start getting your workers certified.

One of the big issues in the past couple of years has been the blowing agents used in spray polyurethane foam, specifically HFC-245fa used in closed-cell SPF. This whole thing blew up when Alex Wilson of Environmental Building News wrote a paper in 2010 in which he concluded that closed-cell SPF and extruded polystyrene (XPS) had too much global warming potential (GWP). He made his paper look like science when it wasn’t and made so many assumptions that his results were not valid. I wrote a response to his paper in August 2010, Don’t Forget the Science in Building Science, but more people read his paper than mine, and sadly, too many people believed his.

Yes, Alex did have a point about the blowing agents, and he should have just said that he didn’t like them instead of trying to calculate bogus ‘paybacks.’ The good news for those who care about the GWP of materials is that the speakers from Honeywell announced their replacement for HFC-245fa, which they call Solstice Liquid Blowing Agent. It has a GWP of less than 5 (HFC-245fa is greater than 1000) and will be available starting in 2013.

The last speaker of the day was Paul Duffy of Icynene. He discussed some of the basics again and, as several other speakers had done, he hit the issue of safety pretty hard. “It’s going to be an obligatory part of SPF presentations from now on,” he said.

Duffy also gave the most jarring example of the day. To illustrate how much pressure the liquid is under when it comes out of the gun in a high-pressure SPF rig, he asked, “What do you think will happen if I aim a foam gun at my hand? It will inject foam under my skin and expand when it gets there.” And remember, low-density, open-cell spray foam expands to 100 times its original volume very quickly. Imagine the Michelin Man on steroids.

It was a great day packed with good information. In addition to what I mentioned above, the speakers also hit on the topics of ignition barriers, fires, lawsuits, and odors…briefly. I like spray foam, but I’m also wary of some of the drawbacks. As with most of our technology, though, it works well when used appropriately and poorly when it’s not. It’s still true that the process is more important than the product. We need to get a lot more people in building science and construction to really understand what that means, and Joe’s day-long symposium on spray foam was a great way to help with that.

And a tiny foreshadowing…

I got to meet the inventor of the Turbo-Thermo-Encabulator Max! I’ll be interviewing him today or tomorrow and will post a video of it as soon as I can.