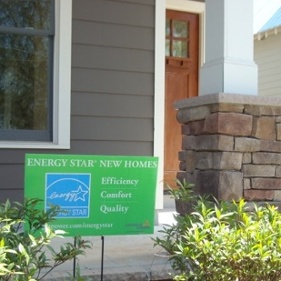 Back in 2009, I attended a webinar given by Sam Rashkin, head of the ENERGY STAR new homes program at the time. (He has since left the EPA for the DOE.) He explained the changes coming in the program as they prepared for the transition from what we now call Version 2 to the new Version 3. The part of the webinar that got the most attention was the change from a fixed HERS Index to a variable HERS Index target, but he also made a prediction.

Back in 2009, I attended a webinar given by Sam Rashkin, head of the ENERGY STAR new homes program at the time. (He has since left the EPA for the DOE.) He explained the changes coming in the program as they prepared for the transition from what we now call Version 2 to the new Version 3. The part of the webinar that got the most attention was the change from a fixed HERS Index to a variable HERS Index target, but he also made a prediction.

It was clear that ENERGY STAR was ramping up the requirements more significantly than they had in previous updates. HERS raters attending the webinar were worried what that might do to their rating businesses and asked about this. “We expect to lose about half of the builders in the program,” Rashkin said.

As it turns out, Rashkin was a bit optimistic with his prediction. I’m sure well more than half of the builders have jumped ship. As a provider, we’ve seen our ENERGY STAR ratings fall to 20% of our total this year. We had some Version 2 stragglers earlier in the year, though, and if you take those away, our ENERGY STAR Version 3 ratings make up only 10% of our total. From everything I hear from raters and providers around the US, our experience is not unique.

Why the precipitous drop?

If you talk to HERS raters, you’ll hear several reasons for ENERGY STAR’s demise: The HVAC requirements are too onerous. The change came at a bad time, as the bottom had just fallen out of the housing market. The reduced thermal bridging requirements put too much liability on the rater when they recommend that builders use less framing. (See Skye Dunning’s long comment about these issues in my last article.) Those things are all true, of course. In 2010, I went to an ESV3 train-the-trainer session in Raleigh, North Carolina, and the room erupted when we got to the new HVAC requirements. Most of us in the room were HERS rater trainers and RESNET Quality Assurance Designees (QAD) and had spent considerable time fighting with raters, builders, and HVAC contractors over the much less rigorous V2 requirements. I remember telling Arnie Katz, the facilitator, that the new V3 requirements were great, but the HVAC industry wasn’t ready for such a big leap.

Those things, however, are not the real reason ENERGY STAR is dying. No, ENERGY STAR is dying because they forgot what their role was. ENERGY STAR used to be an entry-level energy efficiency program. Home builders generally didn’t have to stretch too far, or pay too much, to meet the requirements and get that ENERGY STAR label. They abandoned that role with Version 3.

Which way from here?

I wrote earlier this week about Georgia Power’s path away from ENERGY STAR to the creation of their own entry-level energy efficiency program, EarthCents. They had been piggy-backing on ENERGY STAR and giving home builders a rebate for every ENERGY STAR certified home (with some other requirements). Instead of moving up to Verson 3, however, they created their own program based on a fixed HERS Index of 77.

Georgia Power’s program, though, isn’t national in scope. The only entry-level activity going on nationally that I’m aware of is home builders marketing the HERS Index. RESNET was smart to push hard on this as soon as they knew what the new ENERGY STAR Version 3 requirements The only problem with builders just getting a HERS rating is that it’s not a program with requirements that must be met. Version 2 of the ENERGY STAR program was great because it required two inspections (predrywall and final), right-sizing of HVAC systems, and a maximum HERS Index. Any builder can get a HERS rating and market the HERS Index, even if it’s for a barely-legal, code-minimum home.

I’m certainly not knocking the idea of home builders marketing the HERS Index. After all, if they’re doing so to compete against other home builders, they’ll strive for better results. What I’m saying here is that a HERS rating is not an energy efficiency program, entry-level or otherwise.

It’s too bad that ENERGY STAR vacated the entry-level program realm because their brand is so well known. Maybe they’ll come back to their senses and reclaim this market. They could do so easily by introducing a tiered program, which would allow them to keep the ESV3 requirements and have an entry-level program. In the meantime, home builders looking for a national entry-level energy efficiency program will remain in limbo.