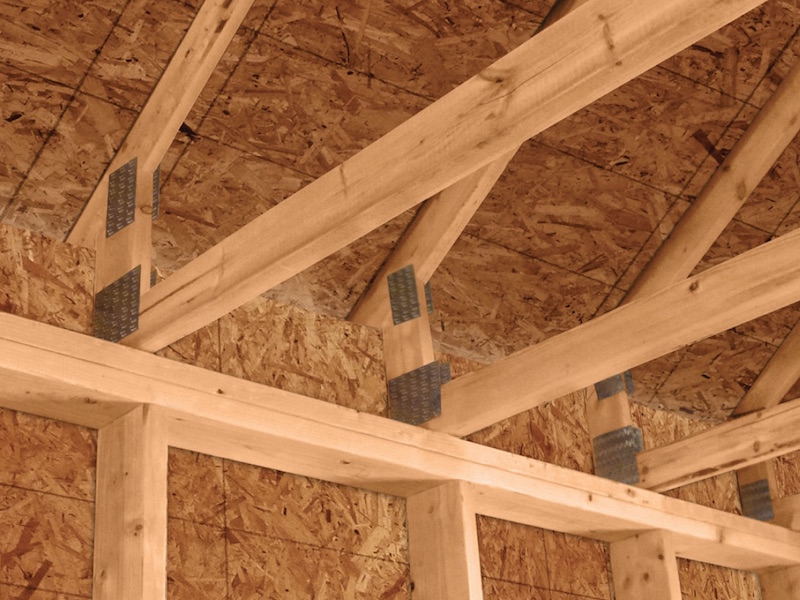 A comfortable, energy efficient home begins with a good building enclosure. That means control layers. You’ve got to control the flows of moisture, air, and heat. Today, let’s talk about controlling heat and further, let’s focus on heat going through the top of the house. If you’ve read my Flat or Lumpy article, you know it’s better to have a uniform coverage of insulation rather than a lot of insulation in some places and little insulation in others. But you may not know about one place where most homes just can’t get enough insulation.

Yep. I’m talking about the space over the exterior walls, where the roof comes down and leaves little space for insulation. Take a look at this photo below. It’s from the Building America page on minimum insulation at the attic eave. The trusses seem to be made from 2x4s, so there’s about 4″ of space for insulation over the exterior wall (bottom of photo). The rest of the attic will have about 12″ or more of blown insulation. Hmmmm. Is there some reason that the space over the exterior wall might have lower susceptibility to heat loss and heat gain? In summer, it could be a bit cooler there because of venting (not shown above). In winter, that spot is likely to be worse than the middle of the attic, again because of venting. Overall, though, there’s not good reason to have less insulation there.

And speaking of venting, check out this Building America photo showing incorrect installation of the baffles. The problem here is that the cardboard baffles are stapled to the inside of the top plate. In this house, as a result, there’s going to be absolutely no insulation directly over that exterior wall (unless it was corrected). That’s the kind of stuff that causes not only higher energy bills but also comfort problems because of reduced mean radiant temperature, durability problems because of condensation (including frost on the ceiling and walls in cold climates), and indoor air quality problems because of mold growth due to the condensation.

But we know how to solve this problem. The pen test will help you spot problems like this. The solution for roofs framed with trusses is something called the raised-heel truss, also called an energy heel truss or energy truss. (But be sure to see the name I propose below!) The diagram below comes from a paper by APA – The Engineered Wood Association titled Raised-Heel Trusses for Efficient, Cost-Effective, Comfortable Homes. Note the extra height at the heel of the raised-heel truss (right) compared to the conventional truss (left). You can get about 15″ of space for insulation in raised-heel trusses. That’s a lot better than 4″, and it makes the attic insulation overall much closer (if not equal) to the flat side of things than the lumpy side. Insulation, like gravy, should not be lumpy, you know.

The Building America photo below shows a raised-heel truss and you can see even with the baffle for venting installed, there’s a lot of room for insulation. Let me draw your attention to one more benefit of raised-heel trusses. You can run the exterior sheathing up from the wall onto the heel of the truss. That gives you a nice dam to prevent wind-washing, a common problem at the eaves of conventional roofs.

Those venting baffles shown in a couple of the photos above are supposed to prevent wind-washing, but when they aren’t installed, as is the case in many older homes, or when they’re improperly installed, wind comes up through the soffit vents and blows the insulation back into the attic. Even if an attic started with some insulation over the exterior walls, there may not be any there now if the attic is subject to wind-washing. That sheathing on raised-heel trusses makes it nearly impossible for the insulation on the edge to be blown inward.

The same principles apply to roofs framed onsite. You need to adjust the framing at the edge to allow for more insulation over the exterior walls at the eaves. Here’s a Building America diagram showing how to do it by putting another top plate on the top of the ceiling joists.

If you’re building a house and not adjusting your construction techniques to allow for adequate insulation at the exterior walls, you’re missing a big opportunity. My only problem with raised-heel trusses, however, is the name. Raised, to me, indicates that the whole thing is lifted up. The top chord is higher but so is the bottom chord. Really, though, the whole thing is taller, not raised. So I propose we give these energy-saving trusses a new name: high-heeled trusses. Yeah! I like it. That’s got some serious low spark1.

1. I may be dating myself with this reference to the classic 1971 song by Traffic, The Low Spark of High-Heeled Boys, but let me state for the record that I was only 10 years old when it came out and didn’t find out about it until much later. Now Joe Lstiburek, on the other hand, is an old guy who probably listened to the album in his bedroom after hockey practice and got yelled at by his parents for playing it too loudly. ↩