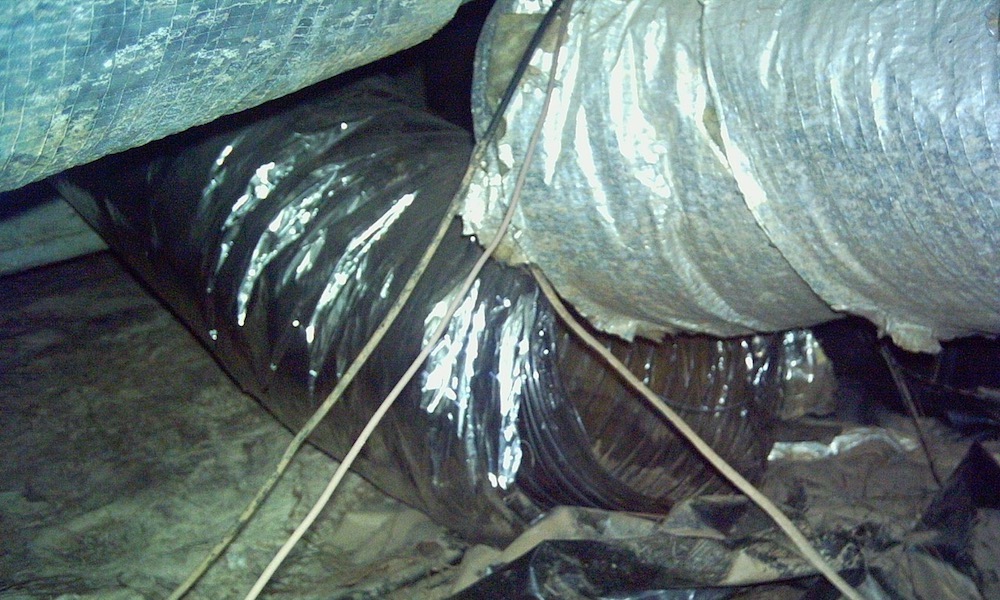 A lot of discoveries and research work over the past four decades have led to our current understanding of air leakage in buildings. I’ll mention a few here, but I want to focus on one: the MAD AIR paper by John Tooley and Neil Moyer. The full title of the paper was, Mechanical Air Distribution And Interacting Relationships. The first letters of those words spell out MAD AIR.

A bit of pressure testing history

In classes that teach people some basic building science (e.g., BPI Building Analyst, HERS rater), pressure testing is one of the most important topics covered. We teach people how to do blower door tests, duct leakage tests, and a little zonal pressure diagnostics. We show them how duct leakage or closed doors can create pressure differences. And we make the connection between air leakage and comfort, health, durability, and efficiency. But where did all this come from?

Home Energy magazine published a nice article on the history of the blower door back in 1995. First developed in Sweden in 1977, the blower door came to America a couple of years later. By 1986, there were 13 companies making this invaluable tool.

The 1980s were an exciting time to be doing this research because the new tools gave energy auditors a way to find out what was really going on in our buildings. At first, though, the focus was on air leakage through the building enclosure. They were looking for holes that robbed homes of conditioned air or brought in unwanted unconditioned air.

In the 1980s, John Tooley and Neil Moyer had a small company called Natural Florida Retrofit, Inc. They were doing pressure testing and fixing homes in central Florida, a hot, humid climate where pretty much everyone has an air conditioner. By the ’80s, those air conditioners were mostly of the central type, with ducts running through attics, garages, and crawl spaces.

Tooley and Moyer wrote the MAD AIR paper in 1988, documenting their findings from 371 single family homes. They first found the infiltration rate of the homes (graph below). Then they looked at what happened to the pressure difference between the inside and outside of the home when they did crazy things like turning the air handler on or closing bedroom doors. What they found was that duct leakage can have a big effect on the pressure in a home. They also found that closing bedroom doors can have a big effect. And they correlated these issues with the airtightness of the homes. Here are some of the main takeaways from their paper:

If you’ve taken any type of building science class, this should sound familiar. For example, we have sayings for numbers 1 and 2 above: Return leaks blow; supply leaks suck. Now you know where it comes from.

One of the most important aspects of their paper was that they saw the implications of these problems. They wrote, “These factors can be major contributors to (1) excessive energy consumption, (2) poor thermal comfort, (3) degradation of building materials and (4) indoor air quality problems (i.e. homeowner health to the possible extent of illness, grave sickness and even death).” They discussed the role of mechanical systems in backdrafting and mold growth, the effects of homeowners closing registers to unused rooms, and more. This was groundbreaking work!

Tooley and Moyer weren’t the first ones to do this kind of work. They cite a couple of earlier papers on infiltration and air conditioners. (See page 5 of their paper.) But I believe they may have been the first to put all this together and see how important it was to deal with the mechanical systems and their effect on house pressures and air leakage.

In their paper, Tooley and Moyer gave a list of solutions to the problems they described and also a great diagram showing what they called the untouchable ducts. Here it is. At the 2016 Affordable Comfort conference in Austin, I had the honor of moderating a couple of sessions called Insights from Home Performance Veterans. The speakers were Gary Nelson of The Energy Conservatory, David Keefe of Vermont Energy Investment Corporation, and John Proctor of Proctor Engineering. They shared a lot of great stories of those early days when we learned so much about how buildings work, including Tooley and Moyer’s MAD AIR work.

And then there’s Joe Lstiburek, who had been doing a lot of building science work during the ’80s as well. He pushed the airtight drywall approach, studied backdrafting, and did a lot of other work to understand the building enclosure.

The MAD AIR paper by Tooley and Moyer was an important part of his doctoral research. His PhD thesis is called Toward an Understanding and Prediction of Air Flow in Buildings. The first people he thanked in the acknowledgments were his advisors. The second two mentioned were Tooley and Moyer. Here’s how the abstract begins:

“This thesis makes two fundamental arguments in the analysis of air flow in buildings:

In short, he took what Tooley and Moyer started and turned it into a full academic exposition of pressure and air flow in buildings. He worked through the pressure differences that drive air movement between indoors and outdoors, often going through interstitial spaces (a word he used 127 times in his thesis).

We all owe a big debt of gratitude to the building science pioneers who helped lead us to our current understanding of these principles.