I've been on a bit of a mission for the past several years.  My goal is to get more people thinking about humidity in terms of dew point rather than relative humidity.  Why?  Because relative humidity is misleading.  That whole "relative" thing is a bit slippery, you know.

For example, I've had a building industry professional who deals with this stuff tell me that in his area, they regularly see both temperature and relative humidity in the 90s (Fahrenheit and percent, respectively).  It's a common misconception.  Last week I was speaking with a client in the mid-Atlantic who told me it gets up to 98° F and 95% relative humidity where he builds.

I don't doubt either of those people.  I just think their timing is a bit off.  Yes, hitting temperatures in the 90s, even up to 98, is certainly possible in the majority of the United States.  And having relative humidity at 90% or higher is also possible, especially in the Eastern half.  They just don't happen at the same time.  When they do, new records are set.

Yes, meteorologists and climatologists keep records of such things as highest dew point.  Dew point is the quantity you have to look at for records because it actually tells you how much water vapor there is.  Relative humidity tells you how close you are to saturation (100% RH), which happens when the water vapor starts condensing out as you try to add more.

So, let's look at some records.  Here are the highest dew points recorded in the US:

Let's now take a look at what the air temperature (dry bulb) and relative humidity was for each of those:

You're probably wondering now about the rest of the world.  The highest dew point temperature ever recorded was 95° F on 8 July 2003 at Dhahran, Saudi Arabia.  The air temperature at the time was 108° F, making the relative humidity a relatively dry-sounding 68%.

Yes, the mythical 90/90 day for air temperature and relative humidity is possible.  It's happened at least once before...and it set a record.  But those are far from normal conditions.

An 80/80 day, however, is quite likely on the humid side of North America.  The dew point in those conditions is 73° F.  If you live in Houston or Mobile or Florida, that's about the low end of humidity for you this time of year.  Here in Atlanta, that's about where we top out.

The weather app on your phone probably shows the dew point for your location so if you get in the habit of looking at it, you'll have a better idea of the humidity. Here in Atlanta, our normal summer range is from the high 60s to the low 70s.  On the Gulf coast, it's mid to upper 70s.

Here's a screenshot of the dew point map on usairnet.com, showing dew points all across the United States at 7:30 this morning, Eastern time. 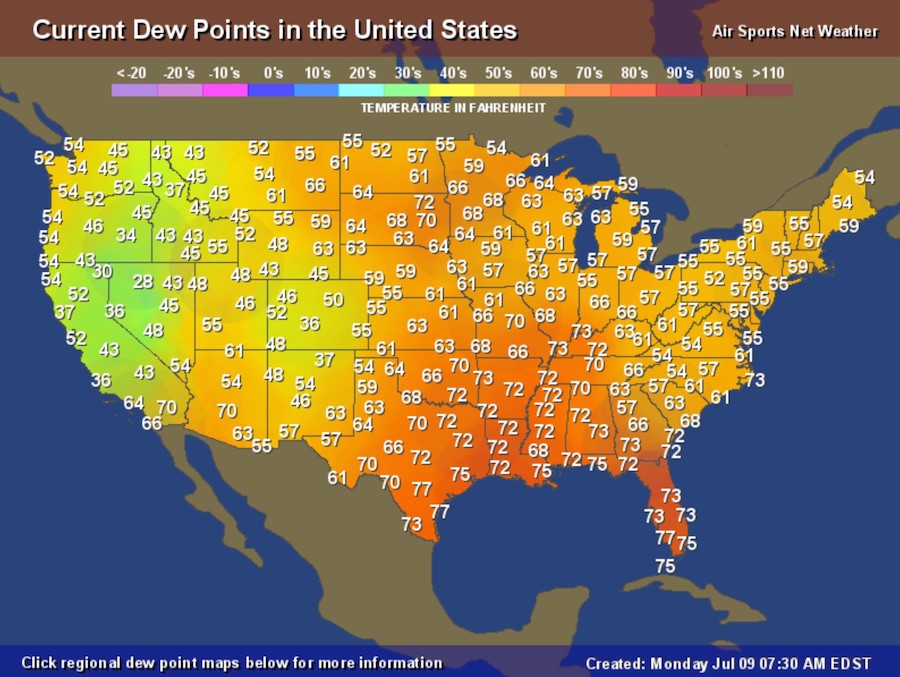 Checking the dew point gives me an idea of how humid it really is.  When I get up in the morning and see a dew point of 61° F, as it is this morning, I know it's a great day to be outdoors because it's going to feel like I'm in Santa Monica, California...well, almost anyway.

There you have it.  Relative humidity isn't what a lot of people think it is.  Dew point will always be your friend, though.

Thank you for blowing up the old "90F and 90%" saying. I used to say it myself, until I learned how the HVAC industry looks at humidity.

Dewpoints in peninsular Florida run in the low to mid 70s pretty much 24/7 4-5 months per year...and this is why I cringe whenever I hear from folks in conventionally framed who set thermostats below 72.

In one extreme case of setting at 65 every night, the owners basically "totalled" their home using their thermostat - ruinous accumulation of mold behind drywall.

Excellent point, Curt.  And I like that analogy.  Everyone knows what it means to total a car.  People who understand dew point are not likely to total their house with the thermostat, as you described.

I love this turn of phrase,

Thanks, Andy.  I thought briefly about using a different word, so I'm glad I didn't.

Has anyone found a good dew point sensor/meter?

Jacob, there are some available.  Check TruTech Tools (https://www.trutechtools.com).  I usually use a thermo-hygrometer or a temperature and relative humidity data logger and then convert to dew point with the help of an app on my phone.

Thanks Allison. Are there any home thermostats that can control a whole house dehumidifier using dew point? It seems like most of the common products only use RH.

Jacob: Allison must be asleep, so I will try to answer your question about thermostats using dewpoint instead of relative humidity. I am not aware of any. There is no reason that thermostat manufacturers couldn't do it, but I am guessing that their marketing people see no interest in it beyond the people on this blog. If you keep your space temperature at about the same temperature all of the time, then controlling to RH should do the same as controlling to dewpoint. But if you do have significant temperature setpoint changes, or you turn off the cooling system at times, dewpoint probably would be a preferable control variable.

Thanks Roy. That's exactly what is most appealing about using dew point to control humidity. The ability to allow a building in the Southeast to get to 80-90F when it is unoccupied, especially for a week or two, without increasing the risk of moisture build up.

However, it's possible that just setting the dehumidifier to ~50% would work well enough to avoid any potential issues assuming no major building envelop problems. I'm not really sure though.

Also, it seems to me that the easier way to state your point is: if the dew point temperature is approximately the dry bulb temperature, than the relative humidity is high.

Also love the "desiccating 39%" phase, I'll have to steal it.

David, I did write about wet bulb temperature once, but I wouldn't say that's my mission.  As you wrote above, wet bulb isn't quite as accessible as dew point, and it's not shown in my weather app.

Here's that article I wrote about wet bulb: