The Surprising Building Science History Behind the Revolving Door

Revolving doors have been around for a century and a half. You see them at the bottom of tall buildings, which tells you something right there. They weren't invented merely to function as a way to enter and exit these buildings. There's a building science reason behind their invention. In fact, the name given them by H. Bockhacker, the original inventor in Germany, tells you why he did it: "Tür ohne Luftzug."

In case you don't speak German, the translation of that is "door without draft of air." In tall buildings, opening a regular door at the bottom of the building in winter time is usually accompanied by a big rush of cold air into the building.

If you've been reading this blog for a while, I'm sure you know the reason for that draft. It's gravity, of course. And its effect on volumes of air at different temperatures. Warmer air is less dense. Colder air is more dense. That changes pressures, of course, and when you make a hole at the bottom of the building, cold, dense air forces its way in and pushes up the warmer, lighter air, which then finds its way out through holes at the top of the building.

This phenomenon has a name. It's called the stack effect. Here's what it looks like when a tall building has a flexible skin. 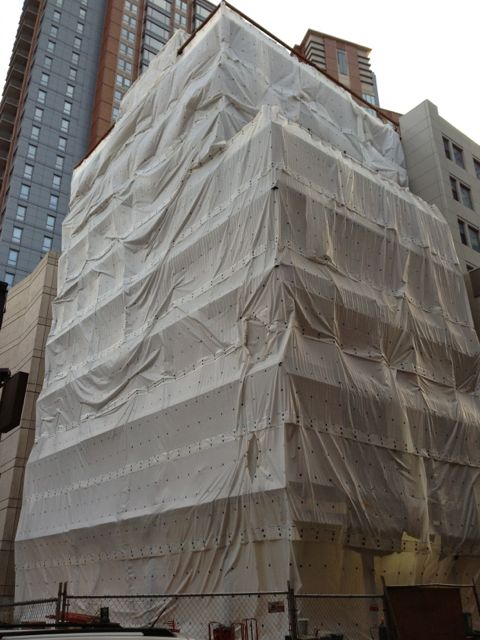 Notice the plastic tarps being sucked in a t the bottom of the building and pushed out at the top.

Revolving doors limit that inrush of air because, unlike a regular door, the inside and outside aren't directly connected to each other when people go in and out.

New buildings have another way of reducing that stack-effect induced air leakage: compartmentalization. Isolate the floors from each other and seal the elevator shafts, and the stack effect is greatly reduced.

There you have it. A new bit of trivia you can use to impress your friends and win bets in bars. Who knows? You may even be able to use this knowledge to your benefit in Building Science Fight Club! (But I can't talk about that.)

Wikipedia article on the revolving door

Photo of revolving door by Hernán Piñera from flickr.com, used under a Creative Commons license.

Ah... progress ... pleased that you didn't say "warm air rises".
Are the plastic tarps being "Sucked in at the bottom"?
Or is it the "Ocean of Air" that's pushing?

Glad to see you're still monitoring my stack statements over here!

Really interesting article. I like hearing the unusual history behind many of the things we don't usually give a second thought to.
How much does modern heating and air conditioning factor into all this? If all floors are kept at, say 72 degrees, wouldn't that greatly reduce stack effect?

Another informative and entertaining article, Allison. My favorite kind!

And let's not forget this definition of revolving doors, as elucidated by Wiki contributors:

Interestingly, the "warm air" aspect of the topic is not discussed :).

Allison, the photo of the blowing and sucking building is the best illustration of the stack effect I've ever seen. That picture is worth a whole chapter in a physics textbook.

I agree, Jim. I took it two years when I was in Boston for the NESEA Building Energy conference. It seemed like a quarter of the buildings downtown were under construction or renovation, so there was no shortage of good stack effect subjects.

I also see this at the entrance to airports and shopping malls (usually the double-door/entry system similar to old Victorian homes) - but these are not for stack effect elimination due to building height, just draft reduction as keeping an exterior door open (like my wife likes to do when bidding house guests goodbye) will allow a large amount of interior/exterior air exchange as there is enough stack effect in a single story to enable an opening the size of a door to exchange air through both the top and bottom simultaneously. I know some think the additional costs of adding them to residences today do not pay for themselves, but like most things building performance - it is more about the added comfort than the ROI.

True, David. I know I've seen lots of the double-door type at places like airports, but they may use some revolving doors in some low-rise buildings, too. The difference is that you can have a straight-through opening with double doors but not with a revolving door.

For us raters out there, no doubt about this stuff when you open an attic hatch on a cold day (I'm in Canada), especially in an old three storey Victorian. No worry about insulation in the house! However, sometimes in the summer or other warm times I pressurize the building a bit to keep the insulation out of the house when I open the hatch- always check the hatch. I forget if remrate has an input for stack effect but, in Canada, Hot2000 has a "height of highest ceiling" input that accommodates it. Thanks for the great blogs Allison