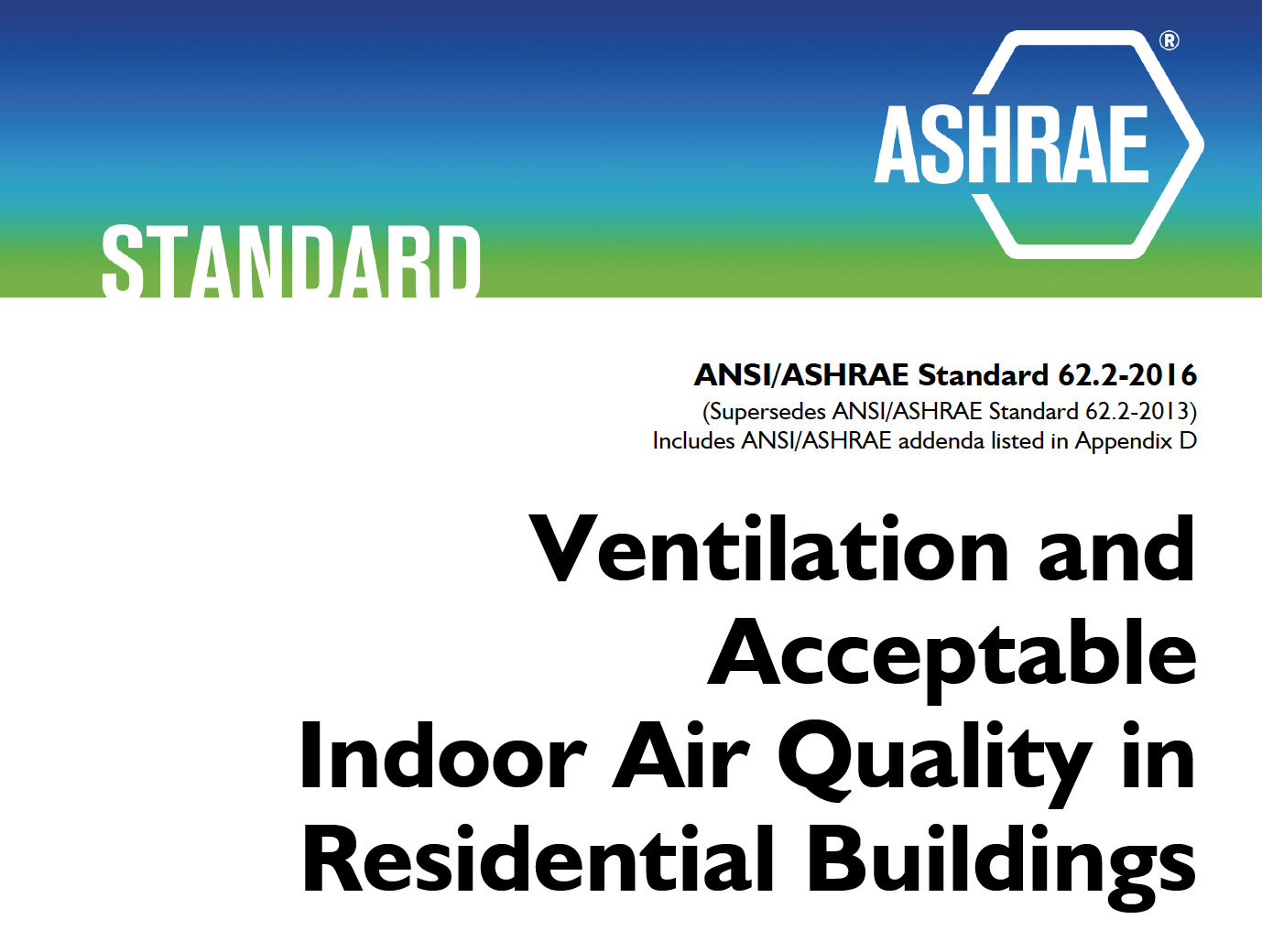 It’s been a while since I’ve written about what I had been calling “The Great Ventilation Debate” back when Joe Lstiburek was battling the ASHRAE 62.2 residential ventilation committee.  The 62.2 committee meets in person twice a year at the two ASHRAE conferences and they just met last Friday and Saturday in Houston, Texas.  A few things have happened over the past few years so let me give you a brief update.

Back in 2013 when Dr. Lstiburek introduced what he called his ventilation standard, BSC-01, the 62.2 committee had just removed the default infiltration credit for homes, which resulted in higher ventilation for most new homes that had to meet strict airtightness codes.  Lstiburek’s rates were based on the 2010 version of the 62.2 standard, with credits for reducing the rates further for ventilation systems that were balanced, distributed, mixed, or some combination of those three.

After the big debate at the 2014 Affordable Comfort conference in Detroit, Lstiburek rejoined the 62.2 committee.  In 2015, they had proposals to adopt something very similar to BSC-01, but they didn’t pass.  The following year, a new proposal to lower the ventilation rates (but not as much) in the 62.2 standard was voted on…and it, too, failed.

So, the rates specified in the 62.2 standard are pretty much the same as they’ve been since the 2013 version of the standard dropped the default infiltration credit.  A home needs 7.5 cfm per person (with number of people defined as number of bedrooms plus one) and 3 cfm per 100 square feet of conditioned floor area.

That’s the total before adjustments.  The amount you have to add can be less if you do a blower door test and take the infiltration credit (not to be confused with the default infiltration credit mentioned above).  It may also change if you’re doing intermittent ventilation instead of continuous.

Ventilation in the International Residential Code

Where things have gotten interesting is that the International Code Council has been taking a different path.  The 2018 International Residential Code adopted a ventilation rate requirement that’s essentially the same as the 2010 version of the 62.2 standard:

The 2021 code goes a step further in the direction of Lstiburek’s BSC-01.  They’ve agreed to allow balanced ventilation systems (where the amount of air exhausted and the amount of air introduced balance each other out) to operate at 30% lower than the rate you’d get from the equation above.

The issue of unvented gas space heaters was added to the scope of the standard with the 2013 version.  Every meeting since then has included time wasted on…errr, I mean, lots of discussion of what, if anything, to do about these appliances.  The industry folks come and make their case.  They have some friends on the committee who support them.  The committee came close in 2016 to approving a motion that would have said a house with unvented gas heaters cannot be in compliance with the standard.

The meeting in Houston didn’t really have much discussion about unvented gas appliances.  The industry folks are trying to get ASHRAE to fund a study of the emissions from these devices but several committee members I spoke with are opposed to that because the industry already has data that they won’t release.

The committee has taken one action, though.  They’ve put a limit on the capacity of an unvented gas heater based on the volume of air available to it.  According to commenter RoyC (see below), “The current change to the standard limits the rated heating capacity of unvented heaters (Btu/hr) to 0.71 times the volume (cu.ft.) of the ‘open’ space where it is located.  Thus, a 6000 Btu/hr furnace (which is about the smallest available) requires a space volume of about 8500 cu.ft., which is roughly an area of about 1000 sq.ft with 8.5 ft ceilings.”

(Note:  This does not apply to ranges and ovens, which are covered by the kitchen ventilation requirements.)

Another issue they’ve been working on for the past few years is a credit to allow reduction of the ventilation rate if a house meets some filtration criteria.  The idea is that by filtering the air more you won’t need as much outdoor air to remove or dilute the contaminants.  It’s a great idea in theory but they’ve had guests come to the past two meetings and point out some of the problems with doing this.

Most recently, Professor Jeff Siegel, an indoor air quality researcher from the University of Toronto, gave a presentation at the Houston meeting about filtration efficiency and ended with a word of caution.  A filter credit, he said, could work only with a performance-based approach and with consumer education about filter installation and changing.  Without these measures, extra filtration with less ventilation could lead to worse indoor air quality.  We’ll have to wait and see if this idea goes anywhere.

ASHRAE and the real world

As I discussed in my other article this week, while the committee was getting lost in the weeds, the conference hotel was blowing unconditioned, high-humidity air into the hall near the meeting room. Yeah, that’s a commercial building and I’m writing about a residential standard here, but the dissonance there was really interesting.

Oh, and that thing about hyperbolic cotangents.  I’m all for bringing up arcane mathematical functions in the proper context.  I’ve got degrees in physics and used to use that stuff all the time.  But when someone gets up in front of the committee and brags about how this is the hardest math he’s ever used for 62.2 and probably the only ASHRAE standard that may rely on hyperbolic cotangents, it’s more than the cotangents that were hyperbolic.  Plus, you gotta be careful doing that because it’s easy to dislocate your shoulder when you’re patting yourself on the back so vigorously.

I’ve been going to the ASHRAE 62.2 meetings since 2014.  I’m going to look for better ways to use my time in the future.