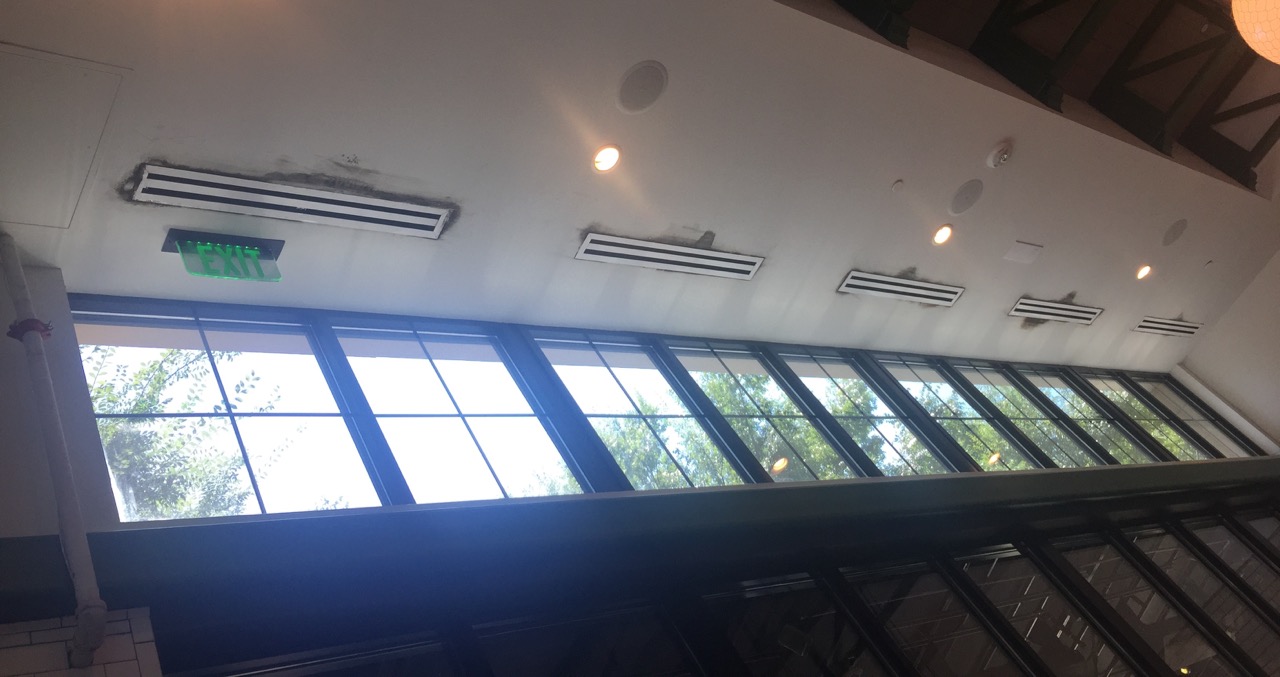 I’ve got the curse, you know. I can’t walk into a building and not check out what’s going on with ductwork, windows, and anything else that lets me apply what I know about building science. Yesterday, I went to lunch at a trendy restaurant near Emory University and of course looked up at the ceiling. You can see what caught my attention in the photo above. The restaurant is only three or four years old, so I’ve been watching this problem get worse for a while now. I have some ideas about what’s happening here. Do you?

Before we get into the speculation part, though, let’s lay out the facts of the case. First, those are supply diffusers for the air conditioning system. They’re in a bulkhead over the windows on an exterior wall. The dark areas around the diffusers have been growing over the past few years. It’s hard to tell what those dark areas are, but it’s probably either dirt or some kind of microbial infestation (e.g., mold).

It looked like there were a few drops of condensation on the diffuser closest to our table, which I’ve shown in closeup below. I didn’t really see much on the others in that row of diffusers by the windows. The outdoor weather yesterday was fairly dry, with a dew point of about 61° F.

Another set of diffusers near the kitchen, however, was covered with condensation. Unfortunately, I didn’t take a photo of those diffusers, but they didn’t have as much discoloration on the drywall surrounding the diffusers. More drops of water on the metal; less darkness. Finally, the indoors was at a really high negative pressure. As I left the restaurant, I had to push really hard to open the door.

OK, let’s see if we can come up with a reasonable hypothesis as to the causes of the moisture problems here. First, where is the moisture coming from? One obvious potential source is the kitchen. Cooking produces a lot of moisture. The diffusers nearer the kitchen being covered with condensation supports the idea of moisture from the kitchen.

But with all that negative pressure, how would any moisture escape from the kitchen? And why would the diffusers in the bulkhead on the exterior wall have more discoloration? Let’s take the questions in order.

Just having really strong exhaust hoods pulling a lot of air doesn’t mean all the moisture and contaminants get pulled in. There’s this thing called capture efficiency. It’s a measure of how much of the stuff coming off the range or out of the ovens gets pulled into the hood. Lawrence Berkeley National Lab is doing work on this topic so maybe someday we’ll be able to select hoods based not only on how many cubic feet per minute they pull but also their capture efficiency.

Restaurant exhaust hoods probably have better capture efficiency than what you have in your home, but I didn’t get a look in there to see what theirs looks like. There’s a lot going on in restaurant kitchens and even if the hood does a good job capturing the stuff coming off the range, cooks move steaming dishes around and dishwashers also put out moisture. So, it’s certainly possible that at least some of the moisture is coming from the kitchen.

But the bulkhead diffusers don’t have as much hanging condensation and they have more discoloration. I think the moisture there is coming from above. Even with a decent air barrier, the strong negative pressure in the restaurant could be pulling outdoor air into the bulkhead. If the ducts or boots (the metal part that the diffusers attach to) aren’t well insulated, the water vapor from the outdoor air is likely to condense on their surfaces. That water drips down to the drywall, keeps it wet all summer, and the result is the discoloration you see. Using zonal pressure diagnostics, we could measure the pressure inside the bulkhead with and without the exhaust fans running to test this hypothesis.

Another possibility is that the conditioned air is too cold and all the moisture is coming from indoors. Maybe the diffusers near the kitchen had more condensation just because they were closer to the air handler and the air was colder when it got there. The discoloration in the drywall would come from water on the diffusers wicking into the drywall. I don’t think this is the answer, though, because the bulkhead diffusers had more discoloration, which tells me the water is coming from above over there.

The first thing I’d fix in this restaurant would be the negative pressure. Commercial buildings are required by code to have makeup air, but this one clearly doesn’t have enough. Adding makeup air and reducing the negative pressure may completely solve the problem with the bulkhead diffusers. It may even solve the problem with the other diffusers if the moisture there is coming from outdoors, too.

If the zonal pressure diagnostics indicates an air leakage problem in the bulkhead and adding makeup air doesn’t solve it, then the air barrier is going to have be tightened up there. I’d want to get rid of that drywall anyway because who knows how bad the problem is above.

If the air temperature from the AC turns out to be too low, the air conditioning system needs to be checked to find out why. That should be an easy fix.

All buildings tell a story. This one is issuing a cry for help.

The Mystery of the Ventilating Dehumidifier