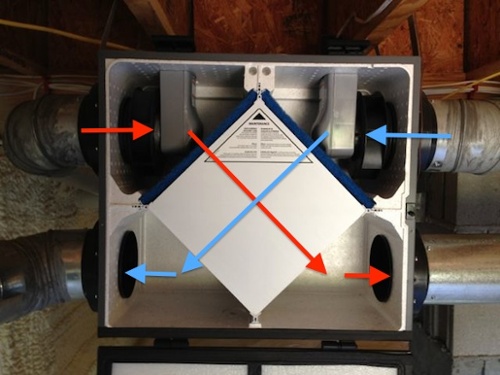 Ah, ventilation. One of the easier topics in building science. Everyone agrees: We need airtight houses. Airtight houses need mechanical ventilation. Build tight. Ventilate right. No problem! We’re all on board. There’s nothing to disagree about. Right?

Ah, ventilation. One of the easier topics in building science. Everyone agrees: We need airtight houses. Airtight houses need mechanical ventilation. Build tight. Ventilate right. No problem! We’re all on board. There’s nothing to disagree about. Right?

Well, not exactly. If you’ve followed this blog for any amount of time, you know there’s plenty of disagreement to be found in the realm of ventilation for homes. Earlier this month I wrote about a new amendment that RESNET has out for public comment now. I mentioned in that article that the building code  has adopted a new ventilation rate. This happened last year and will go into effect in the 2018 editions of the International Residential Code (IRC) and International Energy Conservation Code (IECC).

This is connected to RESNET because of something I wrote about three years ago. In the last code cycle (the codes get updated every three years), the IECC adopted another compliance pathway. It’s a performance, as opposed to prescriptive, path and meeting the code is based on hitting a certain number on what they call the Energy Rating Index (ERI). That index is basically the same thing as the HERS Index and is in the 2015 IECC.

That ties RESNET to the building codes pretty strongly. Actually, RESNET is tied in pretty strongly already because the HERS reference home is based on the 2004/2006 IECC.

So, the code hearings keep happening because they’ve got to keep up with their three year cycle of publishing updated codes. Since the 2015 codes came out, they’ve taken up the issue of ventilation rates. Through the 2015 IRC, the ventilation rate was set at the ASHRAE 62-1989 rate:

0.35 air changes per hour but not less than 15 cfm/person

Last year at the code hearings, that rate was updated to:

That’s basically the rate from the 2010 version of ASHRAE 62.2. There’s no acknowledgment of the differences between ventilation strategies, though. It’s the same rate whether you do exhaust-only, supply-only, or balanced.

This change has happened already. It has passed. It will be in the 2018 IRC/IECC.

But now they have to make another change because of the ERI. RESNET has to change its standard if it wants its HERS Index to qualify as an Energy Rating Index. The code also has to make a change because even if RESNET adopts that amendment, the code language for the ERI points to RESNET’s old standard.

So, they’re working to fix that, too. The language to do so is:

The ERI reference design ventilation rate shall be as specified by Equation 15-1 of Section M1507.3.3 of the International Residential Code.

If that language gets adopted and RESNET passes its amendment, the ERI will be based on the new IRC ventilation rate. If the code amendment passes but RESNET’s doesn’t, RESNET will have to make changes to calculate the ERI separately from the HERS Index. (Won’t that be fun!) If the code language above does not pass, the ERI path probably won’t be as appealing to builders because they’ll take a hit in ERI points for meeting code instead of ASHRAE 62.2-2013.

We’re all in agreement, right? Isn’t it fun to get into the world of ventilation standards and codes! But guess what. This isn’t new. Here’s a quote from the book Ventilation and Heating by John Shaw Billings, M.D.:

“It is in the determination of [the ventilation rate] that the young architect or engineer is likely to find his chief difficulties, owing to the great divergence of opinion among the authorities to whom he will probably refer for guidance.”

That was written in 1893. As it says in the Bible, there’s nothing new under the Sun.