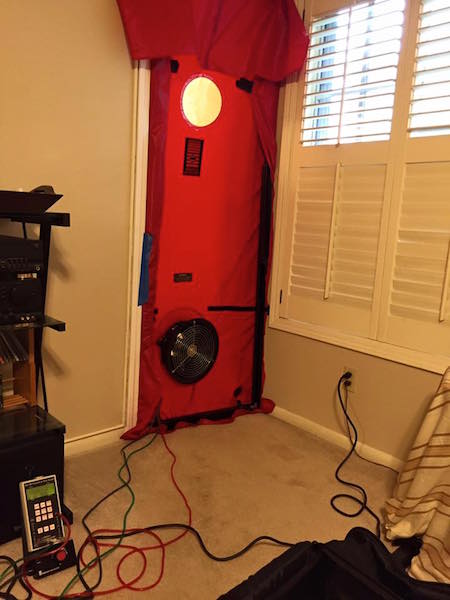 I’ve got a record of 14 blower door tests on my condo. Many of them were during home energy rater classes, as we’d bring them here for the confirmed rating they needed to complete. The early ones were horrible! But I had a good reason. Our laundry room ceiling was half gone because of a water leak. (Thanks, upstairs neighbors!) After that we had a bunch that were still bad. Now we’ve had another big jump in airtightness. Wanna see the numbers?

Evolution of a leaky condo

Stage 1. In 2011, our laundry room had only half a ceiling because of said water leak. That open ceiling was connected to the stairwell and the fireplace chase, which had a lot of connection to the attic of our building. I’m embarrassed to show you the numbers, but here they are:

I told you it was embarrassing.

Stage 2. After replacing the laundry room ceiling, we were significantly more airtight. We did 8 blower door tests over a three or four year period during this stage. Still bad. Still embarrassing. Here are the averages from those 8 tests:

I really shouldn’t be putting those in bold. Why am I drawing so much attention to it?

Stage 3. You know about the work I’ve done in our master bath. I described the air leakage pathways I found in the exterior wall. And there was a lot more, too, because of all the plumbing penetrations and connections to interstitial spaces. But at the same time I was fixing the bathroom, our owners association had spray foam installed beneath our floor. Most of the increase in airtightness is due to that improvement. Here are the latest numbers, measured twice on two different days:

Still embarrassingly high, but better. Now we’re within 10 ACH50 of meeting the Georgia energy code, which requires new homes to test at less than 7 ACH50. So my goal is to get this place that tight before we sell. That means changing the water heater because…gasp…we still have a natural draft model. Talk about embarrassing!

As you can see in the photo at the top of this article, I did a blower door test on our newly remodeled master bathroom. The frame was too wide for the 24″ door, but I squeezed it in between the frame and the wall and tried to seal the gap with blue painters tape. I think there was still a fair amount of bypass. Here’s the result I got:

Not great in terms of ACH50, but that 208 cfm50 was the total leakage of the bathroom. I didn’t do a pressure test to check for leakage only to the outside. Still, 208 out 3418 is only 6% of our total leakage, and the actual number for the bathroom is probably significantly lower.

We’re almost done with the bathroom remodel. We just bought a light fixture this weekend, being pointed to by my wife Elaine in the photo below. We still need a mirror, shower doors, and new plantation shutters for the window.

I love the shower! We installed a temporary shower curtain while we wait for the shower doors so it’s in use already. You can’t see it in the photo below, but we installed a linear drain, which I learned of in a Bob Borson article he wrote 5 years ago. That’s the latest on our bathroom remodel and condo airtightness. I’ll let you know when I get down below 10 ACH50.