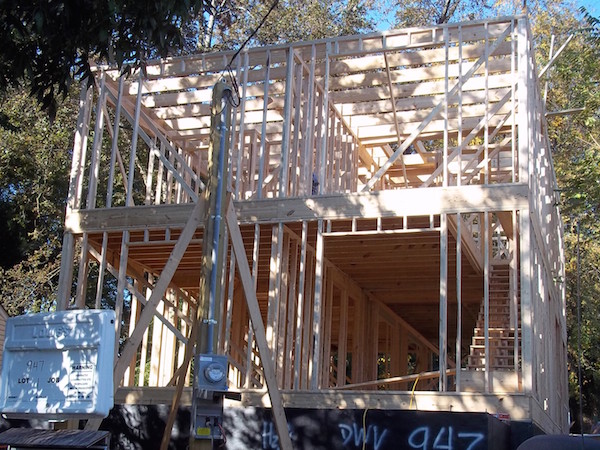 Most new homes in North America are built with sticks. The early home builders used bigger pieces of wood — timbers — and when the smaller dimensional lumber that we use so much today hit the market, they scoffingly referred to those new-fangled little woody things as sticks. So now our home construction industry is staffed with people who do stick building and the home you live is most likely stick-built. And sadly, many of the techniques used to build many of those homes are the same used before we started insulating them.

Before insulation became widespread, it didn’t matter if you put extra wood in your walls. In fact, many builders still think more wood is better. But when your insulation goes into the cavities between framing members, every extra bit of wood means less insulation. That means more heat loss in winter and more heat gain in summer. (Putting all the insulation on the outside is better, but that’s more expensive and not likely to happen on a wide scale in the residential market.)

The good news is there are some simple ways to improve the framing that allow more insulation without compromising the structural stability of the home. Here are three I think ought to be used on every stick-built home.

This one is a no-brainer. When an interior wall intersects an exterior wall, the standard practice is to use three studs to complete the T-wall. The photo below shows what that looks like. Rather than vertical studs, you take some of your scrap wood and run it across horizontally. You put the wide side against the T-wall stud so you have space in the back to insulate that cavity. It’s beautiful! You save wood and get a better-insulated house, too. Here’s what it looks like in real life: The photo above is from the North Central Georgia Habitat for Humanity affiliate. We work with them and are always impressed with their ability to implement stuff like this.

Of course, there are variations of advanced framing at T-walls. Here’s one that a client of ours used a few years ago: It’s got 1-by deadwood for drywall and what is essentially fireblocking through the cavity.

This is similar to the T-wall problem. The standard practice uses three studs and blocks off the corner so you can’t insulate it. Here’s what it looks like: The advanced framing alternative is to use three studs but leaves an opening to get insulation back into the corner, like this: It’s usually called a California corner here in the Southeast. I’m not sure what it’s called in California. Maybe just a corner?

That DOE factsheet I mentioned above also shows how to do a 2-stud corner. Here’s the diagram: It uses less wood and gives you more space for insulation. Check out the factsheet for more details on that.

Headers abound in stick-built homes. They carry the load when you can’t put in studs at the regular spacing, as is the case where you have doors and windows. They’re often made with two pieces of bigger wood, like 2x10s, but they have a gap. In a 2×4 wall, two 2x10s on edge are 3″ thick. The wall is 3.5″ thick. In a typical home, that extra half inch is wasted. In a 2×6 wall, you’re wasting 2.5″. The natural solution here is to throw some insulation in the gap. You can do it easily with rigid foam board. If you don’t like foam, you can use mineral wool or something else. Just get some insulation in there. Otherwise, you’ve got a thermal bridge that wastes your heating and cooling dollars and could create other problems, like making your mean radiant temperature uncomfortably cold in winter or hot in summer. The image above (from the same US Dept. of Energy document on advanced framing as the ladder T-wall image) illustrates how it works.

Too easy not to use

These three advanced framing techniques for walls in stick-built homes are too easy not to use. The only reason they’re not already used on every stick-built house is inertia. “We’ve been doing it this way for 30 years and it’s never been a problem.” If you’re a builder and worried about trying something new, check out Matt Risinger’s video about standard framing versus advanced framing.

The exterior walls in a typical house are 25% framing. Wood has an R-value of about 1 per inch. Most insulation is close to 4 per inch. Using these advanced framing techniques will reduce the amount of wood in those walls and increase the insulation.

It’s time to get over the inertia. These things are easy, easy, easy. Your house won’t fall down. Instead, your house will be better.