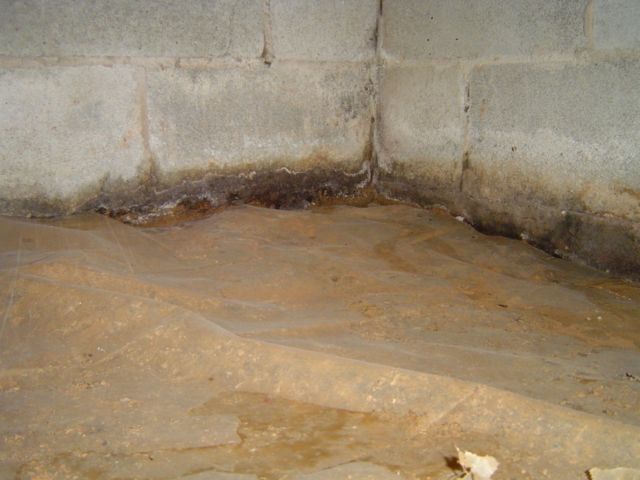 Here in the southeastern US, we have a lot of crawl spaces. Most are vented. Even most new ones are vented. It’s not because it’s the best way to keep them dry. That’s certainly not true. We have enough research on crawl spaces to know better. No, they’re vented because foundation vents got into the code decades ago and, once there, something like that is difficult to dislodge.

So if you have a vented crawl space, especially in a humid climate, it most likely has moisture problems. And where does that moisture come from? Let’s take a look.

The first thing you might think of when we talk about water getting into a space is that’s part of your house is a leak of some kind. A lot of plumbing pipes, both supply lines and drain lines, run through crawl spaces, and they do leak occasionally. Because crawl spaces are visited infrequently, those leaks can go on for a long time before being discovered. This is especially true when a pipe leaks onto dirt or gravel rather than plastic. One time, we discovered a plumbing leak in a crawl space after we encapsulated it. How many years was it there before we came along? Who knows! The photo above shows another source of leaks in a crawl space: the air conditioner condensate line. Those pipes often aren’t installed to the same level of quality as regular plumbing pipes. They also pass lower through the space, making them more susceptible to damage.

Another big source of crawl space moisture is uncovered soil. The photo below shows our Georgia red clay soil in a crawl space. The lighter area was uncovered and looked dry. You might think it’s not putting much moisture into the crawl space air because it looks so dry. But you’d be wrong. The darker patch of soil shown above had been covered by the plastic vapor barrier (6 mil polyethylene) before I pulled it back for the photo. It’s darker because it’s wet. The reason the uncovered soil seemed dry is because it was constantly evaporating water into the crawl space air.

The good news is that most new homes do get vapor barriers put down on the ground, eliminating a lot of the moisture that comes from the soil.

Moisture can also come from the ground outside the house by migrating through the foundation walls. Vented crawl spaces rarely get any kind of damp-proofing or perimeter drains on the exterior. As a result, wet soil outside the crawl space can come right through, as you see below.

The crawl space in the photo below had a lot of this moisture. The backyard sloped down toward the house, putting a lot of hydrostatic pressure against the bare concrete block wall. You can see how well that worked. The whole crawl space had an inch or two of standing water. And it hadn’t even rained in a while when I visited. Another way water gets up against the foundation walls is from a roof without gutters, downspouts that don’t move the water away from the house, or rain water in a yard that slopes toward the house. I had an interesting water mystery to solve in one crawl space I encapsulated, and the source turned out to be one of those three.

Finally, we have the vents in the crawl space walls as a source of moisture. Yes, it’s true. The idea behind those vents was to dry out the crawl space, but they actually do the opposite, at least in the summer. Here in the Southeast, we have this stuff in the air called water vapor. How to have a dry crawl space

If you have a crawl space and want it to be nice and dry, encapsulation is the way to go. (I’m not a contractor anymore and Energy Vanguard doesn’t do this, but a lot of home performance contractors do.) You cover the ground, the foundation walls, and the crawl space vents to stop those three sources from wetting your crawl space. Then you may need to do something about the crawl space air, too. After getting it encapsulated, you have a crawl space that’s beautiful, dry, and, if it’s done right, your indoor air quality should improve. Just ask my friend Perry.