Did the grass outside have dew on it this morning where you live? It did here. (That photo to the left is the actual dew on the actual grass on this actual morning just outside my actual house!) The appearance of liquid water occurs because of one simple fact: The temperature of the surfaces that collect this dew is below the dew point of the surrounding air. Everyone knows that, of course, but what does it mean?

Water really is an amazing substance, and if you're wondering why I'm pontificating on it as if I were a college professor again, it's because water and buildings have an interesting relationship. In fact, understanding how water interacts with buildings is one of the most important jobs of building science. I've heard it said that three of the leading causes of building failures are:

I'm not so interested in knowing the relative humidity as I used to be. By itself, it doesn't give you enough information. If you really want to understand the properties of a given volume of air, you have to know at least one more datum in addition to the RH: temperature (dry bulb), absolute humidity, dew point...

Unlike relative humidity, however, if you know the dew point by itself, you've got some good information. If you have air with a dew point of, say, 20° C (68° F), you know that if that air finds any surface with a temperature of 20° C or below, water vapor from the air will condense and form liquid water droplets, as it did on the car roof shown below. 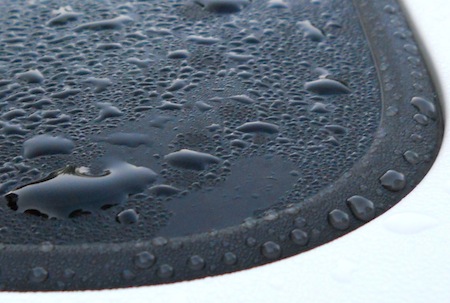 You may see this regularly, especially this time of year. In addition to morning dew on grass and cars, you see it also on cold drinks—that glass of ice water in the restaurant, for example—or the food 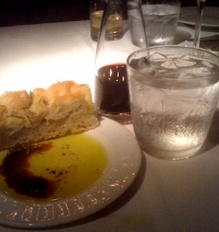 you take out of the fridge and set on the counter.

How do you find what the dew point is? One way I monitor it is to check the Weather Channel on my phone. In addition to the temperature and relative humidity, they also tell me the dew point. You can also find a nice map of dew points across the US on their website. Another really nice website I discovered recently (thanks to David Butler!) is the Dew Point Calculator. It allows you to play around with the sliders for temperature, relative humidity, and dew point to see how changes in one variable effects another.

In a future article, I'll put all these variables together and explain psychrometrics, Willis Carrier's term taken from the Greek words for 'cold' (psychro) and 'measure' (metric). That's where it all comes together, and it's no surprise that the 'father of modern air conditioning' has his fingerprints all over it.

Before I leave the topic for today, let me just give a few examples of where dew point and buildings intersect:

So, if it's true that it really is the humidity, and not the heat, don't tell me the relative humidity. Yeah, it's somewhat useful, but if you're going to give me one number, I'd rather know the dew point.

Absolutely. Things make so much more sense looking at absolute vs. relative humidity.

I couldn't agree more. We have included psychrometrics in all of our building science classes (as have you I am sure) from the beginning. Far too few in this industry fully understand the relationship between air, moisture and temperature. Trying to explain why "uncomfortably dry" air in the winter can result in moisture condensation and physical damage when we move thermal and moisture barriers within exterior envelopes is a critical point that is far too often overlooked.

I recommend folks down load the Trane (sorry, I'm always going to be an old Trane M.E.) interactive Psych chart.

Mark: 'Absolutely' is absolutely the right word here! Thanks for commenting.

Matthew: Yep, we give our students a healthy dose of psychrometrics in our classes. In addition to the Trane psychrometric chart, which I've linked to directly here, I really like Bill Rose's book, Water in Buildings. I don't know if there's a better presentation of the theory and application of this crucial subject.

"If you have air with a dew point of, say, 20° C (68° F), you know that if that air finds any surface with a temperature of 20° C or below, water vapor from the air will condense and form liquid water droplets..."

John: Yes, of course, you're right, and let it be noted here in the comments that the appearance of liquid water on a surface depends on the nature of the surface. I probably should have mentioned it above but was planning to save that for a future article. Thanks for keeping me honest!

One thing I learned as an amateur astronomer is how outdoor surfaces can drop below the dew point even though the air remains above the dew point. This is because the night sky (absent clouds) acts as a black body radiator, absorbing heat from anything that has direct line-of-sight of the sky. You can observe this effect by noticing the absence of dew under a picnic table.

How does this apply to astronomy? The large front lens on a Schmidt-Cassegrain telescope easily fogs up, ruining your observing session (well, not so much here in AZ). Through my years of observing in the Southeast, I learned that dew point forecasts provided by the NWS are pretty much useless.

Fortunately, low-power heaters and dew shields are available to mitigate this problem. Dew shields work well because they dramatically reduce the amount of sky the lens is exposed to. I made my own very effective dew shield from Reflectix lined with black felt. So don't tell me that stuff is good for nothin ;-)

David: Understanding temperature and moisture is endlessly fascinating! Thanks for mentioning this issue that puzzles so many HERS rater test takers.

Well said, as usual. Plus, it's always satisfying to use the word "datum" correctly. :-)

Elaine: Thanks! Don't I know you from somewhere? ;~)

"This is because the night sky (absent clouds) acts as a black body radiator, absorbing heat from anything that has direct line-of-sight of the sky. You can observe this effect by noticing the absence of dew under a picnic table."

David, that is awesome! LIGHTBULBS FLASHING!! Thanks!!

When I lived back east, my brother and I used to combine camping trips with observing. When dew points were high, we would erect one of those wall'less utility tents over our observation planning table, where we kept the eyepieces and sky maps. Otherwise, everything would get soaking wet.

Commercial HVAC, where consistent humidity control is important (such as in museums, libraries, clean rooms, dry rooms, etc.) are transitioning from relative humidity control to dew point control. RH sensors in the return air stream (a common location for measuring RH, along with in the conditioned spaces) can be skewed by elevated or depressed dry bulb temperatures, causing the system to overly humidify (for winter heating/humidification) or dehumidify (for summer cooling/dehumidification).

That said, I personally find dew point useful to track when a building may require humidity to be added or removed. That is, an outdoor to indoor air dew point comparison can be useful in many ways when evaluating building air leakage.