The Mad Housers - Not Your Average Cup of Tea

Posted by Allison Bailes on December 7, 2011

I talk about homes here in the Energy Vanguard blog all the time - new ENERGY STAR homes, HVAC systems to heat and cool homes, home energy audits... Today I'm going to talk about the homeless.

A couple of nights ago, I went to a meeting of the Mad Housers, a wonderful organization here in Atlanta that provides shelter for homeless people. They build and deploy homes that are even smaller than Tiny Houses, and in doing so, they provide people at the bottom of the economic ladder with security, a measure of comfort, and a heaping dose of dignity.

I first learned of the Mad Housers about five years ago when I saw them tabling in front of a store. I talked with them and picked up their literature, mentally noting that I wanted to get involved with them. At the meeting this week, I found a group of dedicated people who are passionate about helping the homeless. This is a 100% volunteer organization, set up as a nonprofit, and their focus is on helping people. 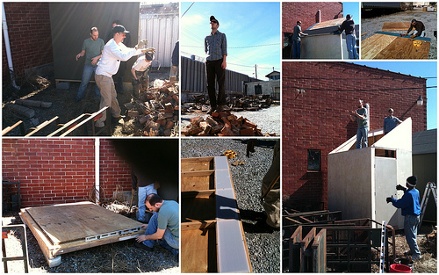 What they do is unique in the spectrum of services to support homeless people, at least as far as I can tell. Some homeless people sleep on the street, as you can see in the photo at top. Others sleep under bridges, in abandoned buildings, or in the woods. The Mad Housers work with those who live in camps in the woods, upgrading their shelter from a blanket with their stuff in a pile under a tarp to an actual wood-framed structure that's insulated and heated and can be locked.

They build the huts at their warehouse in Atlanta and then deploy them to the camps that they're working with. Is this legal? Well, the FAQ on the Mad Housers website addresses that question.

Basically, they don't create camps. They deploy shelters to existing camps and seek permission from the landowner where appropriate. After putting donated money and labor into building the huts, they don't like to see them destroyed.

The types of structures they build are the Hi-Hat Hut, the Classic Hut, and the Low Rider Shelter. The first two 6'x8' and tall enough for a person to stand up inside. They also include a stove for heating in the winter. The Low Rider, at four feet high, is basically a sleeping and storage box.

If you're in the Atlanta area and want to help, check out their calendar of events. They're having a 'Build' this Thursday evening (12/8 at 6:30 pm) and a 'Deploy' on Saturday (12/10 at 10 am). You can also donate money and materials. Currently, one of their big needs is solid core, exterior doors with minimal glazing. (If you donate as a result of this article, please let me know.) If you're not in Atlanta, why not start a Mad Housers chapter in your area.

I appreciate my good fortune in having a comfortable and secure place to live (even if it is a building science atrocity at the moment). I also feel the need to help those who have less. Like many people, I'm reticent to give handouts when asked on the street, although I dig into my pocket occasionally anyway. When someone asks me for money because they're hungry, I'll sometimes take them to a store or restaurant and buy them food.

I prefer doing things that make more of a difference, though, like Heifer International, whose method is the proverbial teaching people how to fish instead of giving them already caught fish. The Mad Housers is a kindred organization. They aren't just giving handouts to the homeless. They're giving these people a chance to regroup and get some dignity by giving them a place they can call home.

Excellent organization, how have you decided to get involved? What will you do?

Brilliant. A creative solution that actually gives people a chance to restore some semblance of normality. In Indianapolis, there is a wonderful organization called The Horizon House that offers day services to the homeless...a place to receive mail, get clothes washed, counseling services etc. Together they could be a powerful combination.

How do they insulate and safely heat these structures? (Actually, that might make for a good forthcoming blog post of yours on this topic)

I'm curious about the heating as well? How is this not a fire hazard?

Tom M.: The Horizon House sounds like a great organization that would be a good complement for what the Mad Housers do.

John P.: Good question! I don't know all the details, but they use foamboard in some places (in what is basically a homemade structural insulated panel) and a soundproofing sheathing (QuietBrace by Temple-Inland) on the floors. They don't insulate the walls in the heated huts because they tend to overheat in the wintertime if they do. In the 6th paragraph of the article above, there's a link to the stove details.

And yes, I will be writing more about how they deal with heating and cooling because building science matters even for such tiny homes.

Kim S.: I share your concerns, but I think their safety record is pretty good so far. As I get more involved, I'll know more about how the stoves work and how they're used. For now, here's a link to their page on the stoves they build:

Thank you so much for sharing. As an Atlanta native (now living in Charleston) and part owner of a business based in Atlanta, this hits really close to home. This is a great example of ordinary citizens recognizing a problem and creating an efficient and effective solution for it. Definitely will share with my partners to see if we can somehow help out.