Windows. The bane of the building scientist's existence. As we try to control the flow of moisture, air, and heat, a lot of our problems occur at windows. If the flashing's not done properly, they leak water. If they're not sealed around the edges, they leak air. And because they're windows, they leak heat.

Sean Lintow got me to thinking about this with his recent article on windows, the latest entry in his Building Science for Dummies series. He did a great job explaining the National Fenestration Rating Council (NFRC) window labels. I learned something new about window ratings from his article, too. I had no idea that there was a Condensation Resistance (CR) value for windows. I've never seen a window label that had it, but it does exist.

Anyway, back to the title of this article, a good window is a poor wall. It's a common saying in building science circles. Why? Because it's more likely to leak moisture, air, and heat than the wall sections surrounding it. Let's imagine the installer did a great job with the flashing and air-sealing, though, and just look at how much heat leaks in through windows. 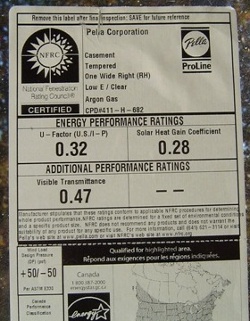 or assembly is, and the Solar Heat Gain Coefficient (SHGC), which tells...well, that's one obvious, right? It tells how much heat gain you get from the Sun shining directly through the window.

The U-value for a typical double-pane, low-e window is about 0.3. Since the U-value is the reciprocal of the R-value, that yields an R-value of about 3. In my part of the world (Southeastern US, IECC climate zone 3, and Georgia, specifically), I'd have to put in a window that has a U-value of 0.5 or better.

Better, you say? Why yes, I did say better, and that means lower. Since U-value measures how conductive a material or assembly is to heat flow, the lower the better.

Up in what we affectionately call the "pig of Georgia,"* because of the shape of the counties that make up IECC climate zone 4, window U-values have to be 0.35 or lower. That's an R-value of 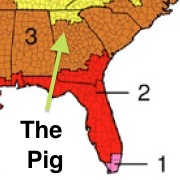 ~2.9. Not a whole lot better than the 0.5 U-value required here in Atlanta when compared to the surrounding R-13 walls.

A really good window might have a U-value down around 0.2. That equates to an R-value of 5, still poor in comparison to R-13. Zola Windows, which makes European-style windows aimed at superinsulated buildings like Passive House projects, has windows with U-values as low as 0.123, which comes out to R-8.1. Serious Materials makes a window with U-0.11/R-9.1. In Passive House projects, those windows go into homes that have walls that are about R-60 or so.

Again, a good window is still a poor wall.

The other type of heat that flows through windows is the direct solar gain of the Sun shining through. This can be a good thing or a bad thing. The Solar Heat Gain Coefficient is a number between 0 and 1. An SHGC of 0 means you get no solar heat gain, as with a wall. An SHGC of 1 is the most you can get through a window.

Unlike with U-values, however, lower doesn't always mean better. Sometimes you want solar gain. In a passive solar design, where

you use overhangs to shade the windows in summer and allow the sunshine to come in during the heating season. That's why in a Passive House (or Passivhaus, to stick to its German origins), the window R-value being so much worse than the wall R-value won't necessarily be a bad thing. If the window helps with winter heating by capturing heat from the Sun, that can overcome the R-value deficiency. Martin Holladay wrote a great article at Green Building Advisor about windows that perform better than walls, and goes into the details of what kind of windows to use and which sides of the house to put them on.

In cold climates, you want all the solar heat gain you can get, so higher SHGC windows are good. The warmer the climate, though, the more important a low SHGC becomes. If you do a significant amount of air conditioning, you want low SHGC. In hot climates, that's even more important than low U-value.

The takeaway here is that solar gain may help, but you'll either have to be in a cold climate without much cooling load or have a good design to take advantage of high SHGC windows.

What should you do?

If you're an engineer and other energy efficiency extremist, it may seem that the only thing you can do that makes any sense, if you look solely at the liability windows present, is to eliminate all windows from a house. 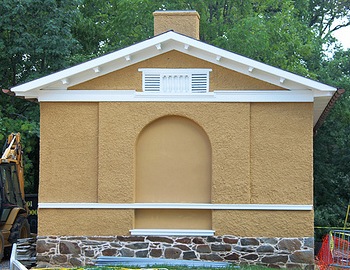 Well, if you do a really nice passive solar design, get all the flashing details right, and do all your air-sealing, windows can actually help. The Passivhaus program is pushing the envelope here, so to speak. Even then, though, you don't want to overdo it on the windows. Keep the relative amount of window area low. A window-to-floor area ratio less than 15% is good. The green home that I built, the passive solar home shown above, has a window-to-floor area ratio of 12%.

For the majority of homes, though, I'll stick with my original statement:

A good window is still a poor wall.

*Actually, the only person I've heard call it that is Scott Lee, one of my former colleagues at Southface, but maybe we shouldn't call it that because of a certain movie reference** that the folks from Rabun County have a great distaste for.

**OK, if you really haven't figured it out, think Ned Beatty. Think Burt Reynolds and canoes and banjoes. Got it now? It's one of the most famous scenes in the movie Deliverance, a movie reviled by the good folks who live in the north Georgia mountains.

Photo of windowless house by dctim1 from flickr.com, used under a Creative Commons license.

Sorry, Allison, but it isn't always true the "a good window is still a poor wall." In a house without air conditioning located in a cold (heating-dominated) climate, a window can perform better than a wall -- because it gathers more heat than it loses. (A wall can't do that).

Here's a link to an article discussing the concept:
www.greenbuildingadvisor.com/blogs/dept/musings/windows-perform-better-w...

Martin H. Yes, you're absolutely right, and I did cover that in this article. See the part above about passive solar design. In the end, I acknowledged that for homes designed properly, windows can be a net benefit, but for the majority of homes, a window is a poor wall. I've had more clients who want a lot of windows for views than clients who want to use their windows to gather heat.

Here's a clickable link to your article, which is a great one:

Windows That Perform Better Than Walls

"The Passivehaus program is pushing the envelope..."

Martin H.: I added another sentence to the article, too, and included the link to your windows-as-net-winners article. Thanks again for reminding me of it.

While Martin makes a good technical point, I'm guessing it applies to less than 1% of the homes being built and designed in this country.
I agree wholeheartedly that a good window is still a poor wall.
But my wife sure does love the natural light (solar variety, not the beer)....

"..you'll either have to be in a cold climate without much cooling load or have a good design to take advantage of high SHGC windows."

Amplifying on that point, passive solar design is beneficial just about anywhere in the US (except perhaps the San Diego and southern Florida). You just have to get the orientation and overhangs right. In warmer climates, it's important to limit high gain glazing to the south facade. Some builders resist this until they understand the benefit. I live in SE Arizona, and passive solar gains cut my heating energy by at least 50%.

And a good wall is a poor window! Walls can't provide natural lighting and fresh air in north Georgia mountains.

A window improvement option that is often overlooked is storm windows, especially with Low-E glass. They can improve R-values dramatically while still providing visibility and ventilation with quick pay-back from energy savings.

Jeffrey: Yes, it is indeed a small number, though I don't know what that number is. And thanks for bringing up the daylighting issue, which I failed to mention in the article.

David Butler: Indeed, passive solar design is helpful just about everywhere. Interestingly, Martin Holladay's post at Green Building Advisor today is on windows, and he quotes from a Canadian report, ""...these results indicate that our long‐held belief in the merits and value of passive solar energy as a key component of Net Zero Energy House design need to be carefully re‐examined and likely challenged." When the overall envelope is really good, in other words, solar heat gain in the winters has a much smaller impact. Here's the link to the article:

Top-of-the-Line Windows are a Waste of Money

David B.: Yes, windows are great for daylight and ventilation, in the north Georgia mountains and beyond. For existing homes with single pane windows, storm windows can make a big difference. I personally don't like them because they're a pain to clean (something I did professionally in a previous life).

Although Passive House does not "require" passive solar it's very hard to make a design "calc" (with the PHPP software) w/o careful attention to orientation, shading, overhangs, window placement within the depth of the wall, U value, SHGC, etc. In that regard it does place an emphasis on passive solar. Keep in mind it is a performance pathway, not a prescriptive one.

Modern wood, vinyl, etc windows are not always what people with older homes want. They can restore and weatherize their old, heartwood windows to energy efficiency, especially with good storm windows. Restoring should include: paint stripping, wood rot repair, sealing the rope or chain cavities, removing old glazing and replacing it with better sealing products, weatherstripping the window seals, and sealing with good storm windows (which do not have to obstruct the original beauty of the old windows). A new technology of low, infrared heat Speedheater (eco-strip.com) can safely and efficiently remove the paint and glazing without breaking the glass.

Too logical. From a scientific aspect of energy conservation, you are factually correct, however, the "poor wall" has emotional and physiological benefits that far outweigh loss of heat. As well, unless you build a concrete hollow shell, you will always deal with a compromised envelope. Who wants that?