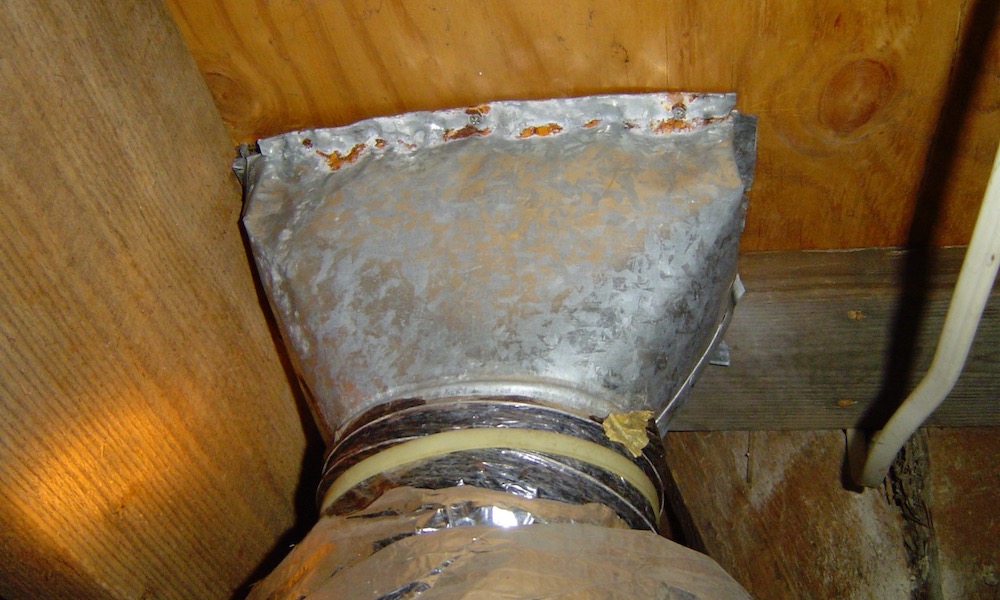 I’ve seen it over and over: The central air conditioner’s ceiling vents raining down onto the floor. The insulation liner on the duct in the crawl space holding a gallon or two of water. The office that has spots appearing on the ceiling. It’s not uncommon at all, although it should be.

Water loves cold, you know. Cold surfaces are almost like magnets to water in its vapor form. Just think how blissfully the water vapor was floating around that one time, minding its own business, and then you sat down and put your nice cold glass of gin and tonic (or whatever cold beverage you prefer) on the table (on a coaster, of course). Within seconds, it seemed, water droplets appeared on the outside of the glass. In my part of the world (Southeastern US), it doesn’t take much longer for those droplets to become driplets.

Another place where that same phenomenon happens is on your boots. No, no, not those boots. I’m talking about your other boots, the ones you rarely look at because they’re hidden behind the vents in your home.

Here’s how it goes down. Air with water vapor in it can be described by several important quantities (vapor pressure, relative humidity, humidity ratio, relative fugacity…), but the one we’re interested in here is dew point. When that air finds a surface, such as a cold duct boot, at a temperature below the dew point, the water vapor just can’t help itself. Those water vapor molecules hurl themselves at the below-dew point surface and stick there.

The science is pretty easy to understand. The principle is well known. And yet, I see all the time this problem of water vapor condensing where it’s not wanted.

If you have a central air conditioning system with a duct system in your home, you’ve probably got a lot of boots. Go take a look at them and see if they’re insulated. If they look like the one you see to the right here, where you can see the bare sheet metal, they’re not insulated. When cold air moves through them on the inside and humid air is sitting there on the outside, you’ve got all the ingredients for condensation.

Notice also in that photo that the wood around the uninsulated boot is discolored. That’s because the whole area stays colder. The cold boot not only attracts water vapor, it also attracts those lusty Btus of heat, which attack the cold boot, warming the air inside it and cooling the air outside. When the wood gets colder, it absorbs water from the air. Then it starts growing nasty stuff.

Back to the condensation problem, though, when enough of it starts collecting on an uninsulated boot like the one shown above, the water starts dripping down. The coaster in this case is the duct insulation, which is eager to absorb all the water that drips its way. Once I went into a crawl space that had at least a gallon of water in the duct insulation liner. Wow!

Those duct insulation liners are watertight…to a degree. When enough water sits in there long enough, the stress is too much. You can see the result in the photo below. It may look wet in the photo, but it was totally dry when I was there. The blowout had happened sometime before I ever visited that house.

When this happens in a crawl space, it rarely gets discovered or recognized. Who cares if water drips down onto the already wet ground, right? Well, your duct system cares. Your bank account cares. The tadpoles care!

Uninsulated supply boots in a ceiling, however, usually do get noticed, at least in humid climates. Sometimes people don’t know what causes it or what to do about it, but they do notice that they’ve suddenly got spots on their ceiling where they didn’t have spots before.

The moral of this story is to insulate your boots. It’ll save you money on your energy bills and repair costs. It’ll reduce the likelihood of nasty stuff growing in your home. Moisture problems in homes are suspected to be a leading cause of asthma. It’ll make your home more comfortable, too, because the air coming out of those vents will be as cold or as warm as it’s supposed to be.

One very important detail to get right is to make sure that you use the proper materials and seal them up. If you insulate with fiberglass, it’s got to covered with a class I vapor retarder (i.e., a vapor barrier) to prevent water vapor from diffusing through to the cold surface. It also needs to be air-sealed to prevent humid air from leaking in and finding the cold surface.

Go on now – go look to see if your boots are insulated. You shouldn’t be able to see any sheet metal if it’s done properly, as shown in the last photo here.