When does saving one of anything ever result in actually saving three or four? When we're talking about electricity, of course. The reason is simple: Most of our electricity comes from the burning of fuels like coal and natural gas. That process results in a lot of waste heat. After converting the fuel, we then send the electricity through miles and miles of wires, where it loses more of the energy that was originally in the fuel (called source energy or primary energy).

Take a look at the diagram below. It's from the Lawrence Livermore National Laboratory (LLNL) and shows the energy flows in the US for the year 2010. (Click the diagram to see a larger image.) A while back I wrote about US energy flows and showed similar diagrams (called Sankey diagrams) from the US Energy Information Administration (EIA). Those diagrams show the inputs and outputs, so you can see the big picture of energy supply and consumption easily.

One addition to the LLNL diagram that's really nice is the grey lines that show 'rejected energy.' Do you see where the thickest grey line is? Right after the yellow box called "Electricity Generation." 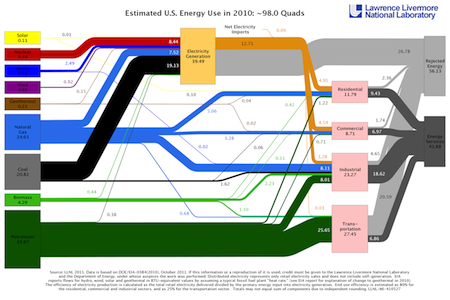 That's about one third. What that means is that for every 3 units of primary energy you're getting about 1 unit of usable electricity. Of course, we don't use that energy at 100% efficiency in our homes, so that reduces our take further.

Here's where we need to change our perspective. Yes, looking at the waste of primary energy can be depressing, but let's turn it around. When you save 1 kilowatt-hour (kWh) of electricity in your home, you're actually reducing primary energy use by 3 kWh. Wow! What an opportunity. Saving a little can actually save a lot. This is one of the reasons Amory Lovins has been talking about 'negawatts' for several decades.

I happen to find energy flows extremely interesting, but you don't have to be a building science geek to see that home energy efficiency can have a big environmental impact. Those 3 kWh of primary energy that you save for each 1 kWh reduction means less pollution from the power plant, less mountaintop removal to get coal out of the ground, less transportation energy to ship coal across the country...

Take advantage of the multiplier effect. Your energy-saving actions are more significant than they may seem.

If You Think Thermostat Setbacks Don't Save Energy, You're Wrong!

Photo of power plant by eutrophication&hypoxia from flickr.com, used under a Creative Commons license.

The issue now becomes deliver fees and meter charges for multiple sources of fuel. In some cases it's cheaper to pay more for electricity than to pay to add another fuel source to the home. In our area gas and electric are supplied by different companies, and they do everything possible to be competitive.

Our gas company strategy is to hit people with a $28/mo meter fee and sell the gas at about near cost. 40 cents per therm is current rate, all delivery fees are included in the $28/mo. This helps keep revenues up in the summer also.

So in our area it makes sense to either have have as many appliances as possible be gas, or go all electric.

I'd like to add to the complexity of this argument.
There is a multiplier effect on savings by saving energy at the source, and this is present in many industries. I recommend Dan Harvey's "Energy Efficiency and the Demand for Energy Services" for more on this.

But the multipliers are not solely dependent on the amount of energy saved. There are secondary, and tertiary "rebound effects".

For example - if someone saves $100 on their electric bill, they have $100 more to spend. That $100 will be spent on something that involves energy, and there could be a big energy difference if it is spent on a rare baseball card versus a flight to some far-away vacation destination. Generally, the rebound isn't that tremendous (usually below 100%, meaning the action did save energy overall.).

The other rebound is macro-economic. If I reduce my energy use, (especially peak use), that reduces the demand on the grid, and thus energy is marginally cheaper for everyone else. This could cause them to increase their use if cost is limiting reason for them to use energy (most industry...). Most of the efficiency gains of the last several decades have been used to increase services for the same amount of energy, rather than save energy for its environmental implications.

Overall, the multipliers still exist, especially now that coal is very expensive (capital and reg costs) and many coal plant are dropping offline. It just may mean that the multiplier is 1.5:1 or 2:1 instead of the 3:1 that raw efficiency would suggest.

I'm surprised you haven't linked this argument to your advocacy of mini-split heat pumps (or should I say "VRFZ", or even better: "VRFIDZMSASHP"? :-), since they run on electricity and seem to do an excellent job tailoring capacity to load, and therefore are supported by your multiplier effect argument.

On the other hand, I never hear you guys talking about CHP or micro-CHP, which runs on natural gas, but generates electricity on site. The rationale being, of course, that transporting natural gas wastes no where near the energy transporting electricity does. So it seems to make sense to use gas to do on-site generation of electrical power.

I was just wondering if you've ever investigated CHP technology, or had any opinions on it. Unfortunately, the existing CHP products out there seem quite prohibitive in terms of equipment cost.

The main problem with CHP technology is the upfront cost. few residencies use enough power to have a reasonable payback time. Another is noise, few want to hear an engine 24/7. it's also more efficient to generate "baseloads" in bulk. part load efficiency of CHP is awful since the generator must typically turn at a predefined RPM.

CHP starts making sense for the HVAC unit, Variable speed NG engine turning a heat pump compressor, and "waste heat" being used in winter to help output. York made a Triathlon heatpump back in the 90's that did this. It flopped mostly due to maintenance issues. Now that many areas are getting time of use pricing for power, and we have better electronic controls, it may be worth giving something like this another shot. Then again it's hard enough to get customers to change their air filters and clean the condenser coils, you really think they want to change the oil in their AC?