Rather than blowing agents, this insulation uses growing agents. It's natural. It's made with agricultural waste and fungi. You can grow it in place. No hydrocarbons are involved, and it yields little to no toxic waste. Compared to most other insulation materials, it takes little energy to make the stuff (low embodied energy). Indoor air quality is likely to be better, too.

Wow! If you're looking for a super green insulation, mushroom insulation could be for you...if you can wait a bit longer.

How mushroom materials science got its start

I first heard about this a while back when I saw a TED Talk by Eben Bayer, Are mushrooms the new plastic? While studying engineering at Rensselaer Polytechnic Institute, he and his classmate, Gavin McIntyre, came up with the idea of using mycelium, the white vegetative strands of fungus you find under logs, to grow materials that could replace plastics.

They've gotten a lot of great media coverage, and I recently read a nice article in the New Yorker about them. According to that piece, the two young engineers worked on developing their idea in their senior year at RPI and then took it full time into a business incubator upon graduation. The challenges were numerous, as they experimented with different varieties of mycelium and substrates. But they persisted and promoted and had some good help from advisers who saw the potential of their idea.

At first they used grants and the winnings from competitions to finance the company. One of those competitions was the Postcode Lottery Green Challenge, which gives a huge chunk of money (~$700,000) to the business with the best idea for reducing CO2 emissions. They entered in 2008 and won.

They decided that using their materials as a replacement for packaging was the most marketable direction to go, so insulation got put on hold for a while. They've since picked it back up, and their focus has been on building tiny houses and growing the insulation in the assemblies. They've got a nice blog about the project, and it's called—you guessed it—Mushroom Tiny House.

I recently spoke with Sam Harrington of Ecovative Design, the company started by Bayer and McIntyre, and got the scoop on where they're going with this. The plan at first is to grow insulation that can be used in board form and as structural insulated panels (SIPs). The mushroom tiny house is basically a grown-in-place SIP.

Harrington said they're benchmarking their product against extruded polystyrene (XPS). The advantages are that it uses natural materials, doesn't have the global warming issues associated with the blowing agents in foam insulation, and has much lower embodied energy. The main drawback is the lower R-value. XPS is about 5 per inch, and mushroom insulation ranges from 1.8 to 4 per inch, with the typical material coming in at about 3 per inch. So your walls are going to have to be thicker. 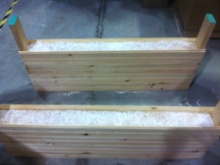 Their longer-term plans include using it to replace as many environmentally-harmful materials as possible: plastic foam, acoustical tiles, medium density fiberboard (MDF), particle board, adhesive, and engineered wood. One advantage of their materials is that the mycelium is their adhesive, so they don't have to use the stuff with nasty volatile organic compounds (VOCs). That means better indoor air quality.

But wait, I hear you asking, what about the IAQ problems of having fungus and spores and who knows what from the oat hulls and wheat chaff substrate? Ah, but there are no spores. They're using mycelium only. And although they call it mushroom insulation, you'll see no mushrooms sprouting from the walls. The substrates used as the filler material that the mycelium feeds on and weaves together are sterilized to prevent other organisms from growing. Then, once the mushroom insulation has finished growing, they hit it with steam to stop the growth.

Get ready for mushroom insulation 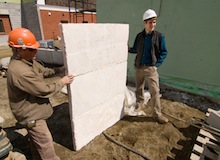 None of the mushroom insulation products is ready for market yet. If you're an early adopter, Ecovative Design is taking pre-orders. (According to their blog, the cost is about $0.66 per board foot.) To get shipments of mushroom board insulation, SIPs, or the other materials they're working on, you'll need to wait a while longer.

When their building products enter the market, I hope they can scale it up so that the cost is competitive with the other materials out there. It's also going to be important for them to do enough R&D to reduce the number and severity of problems that new products so often have.

Yeah, it's still fairly early in the development of mushroom insulation, but I'm excited to see this material getting ready to enter the building products market. When it does, it may well be the greenest insulation available.

Just curious, what is the R-Value of this supposed to be? I think I have been following it for almost as long as you, but I have never seen it nor heard what they think it will be. Thanks

Sean: It's typically about R-3 per inch, so it's lower than the foams, fiberglass, and cellulose. It's easy to miss, but you'll find a little discussion of that right before the section on IAQ.

Interesting... and if you need salad fixin's, just pop a hole in the drywall..

How will you tell if you have mold in the house?

M. Johnson: A house insulated this way should be no different than other insulated homes with regard to mold.

I am planning on looking at the mushroom tiny hose website, but I have a few initial questions. Has Ecovative done a life cycle analysis on the materials? Will it biodegrade within the walls?

You can now spray new construction or remodeling before the drywall goes up to prevent mold from being an issue in the first place.

Can this be used for insulating, flat roofs and help rooftop gardens? Nice and light compost? Just asking and "posting" con or pro?

I want to set up a plant for cultivation of button mushroom pls tell me how to insulate the production room...........

I think this is great, and would love to have my home insulated with a material like this- my only concern is that maybe rats, or other animals might get into it?