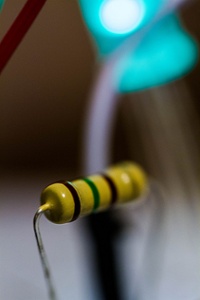 “ASHRAE 62 is the only national consensus standard document there is. Follow 62.2. Resistance is futile.” So said Dr. Max Sherman last summer in a presentation for the Building America Technical Update meeting. (Download pdf official report here.) That statement about resistance being futile isn’t generally a line you want pinned to you if you’re trying to win hearts and minds, but I asked Sherman about it. There’s a whole lot more to the story, too, so read on.

“Resistance is futile.” Martin Holladay dug up this quote for his article on the battle over residential ventilation recently. When I asked Sherman about it, he told me that he used it to “indicate that rather than try to make 62.2 go away it was better to work the ASHRAE process to propose improvements.”

At first, I thought his saying that “Resistance is futile” was quite illuminating†, perhaps putting him in league with the Borg. I wasn’t at the meeting, however, but according to Sherman, “The tone was light and bantering not overbearing or borgish.”

The stage is set

The details about the residential ventilation battle have been covered extensively here and at Green Building Advisor several times already this year (see my list of related articles below), including Martin Holladay’s recent article, How Much Fresh Air Does Your Home Need? Martin’s article has dozens of comments, including at least 9 from people at the highest levels of the battle (Joe Lstiburek, Paul Francisco, and Paul Raymer). And of course, you should read Joe’s article, Unintended Consequences Suck, for his take on how ASHRAE has gone off-course with the 62.2 standard.

To recap, ASHRAE 62.2 is the residential ventilation standard used by some programs and building/energy codes. It uses either a formula or a table to determine the amount of mechanical ventilation needed in low-rise residential buildings. The 2010 version automatically included an infiltration credit of 2 cfm per 100 square feet of conditioned floor area. The 2013 version took it out and made homes qualify for any infiltration credit. Thus, the 2013 version yields higher ventilation rates than the 2010 version.

Lstiburek also pointed out in another comment that we don’t have research data relating blower door results, ventilation rates, and indoor air quality. “No epi studies were done…This has all been guess work. No health studies exist. No baselines have ever been measured.” Without data, he says, any ventilation rates we propose are mere guesses.

Suffice it to say that the battle has been heated. Max Sherman and Joseph Lstiburek, both with PhDs and heavy credentials in the world of building science, have been on opposite sides of the issue for years. Now, it’s about to enter a new phase.

Sherman may be correct about ASHRAE 62.2 being the “only national consensus standard document there is,” but that doesn’t mean that resistance is futile. Joe Lstiburek and Building Science Corporation (BSC) are about to release their own residential ventilation standard. That’s right. We’re about to have competing standards in the marketplace. As Joe told me recently, “In the marketplace of ideas, better ideas will win.”

Here’s a quick overview of the features in BSC’s new ventilation standard, which is still in draft form:

New homes. Having it apply only to new homes throws the infiltration credit out the window and leaves existing homes on their own regarding the need for mechanical ventilation. That makes it easier to have a good standard because it isn’t trying to do too many things.

To say it in words, the ventilation required (Qv) is 1 cfm for each 100 square feet of conditioned floor area (Afloor) plus 7.5 cfm per person. The number of people is defined as the number of bedrooms (Nbr) plus 1.

Note also that in addition to balance and distribution, mixing of the air in the home can affect the ventilation rate. If the home has all three—balanced and distributed ventilation with air-mixing—it knocks the required ventilation rate down by 25%. The result of all this is that that 3 bedroom, 2500 sf home, which would need 55 cfm to meet 62.2-2010 and 105 cfm to meet 62.2-2013, would need anywhere from 41 cfm to 83 cfm under the BSC standard.

Infiltration credit. This has been one of the thorniest issues in 62.2. It’s basically there because of weatherization programs that air-seal existing homes and need to know at what airtightness should they add a mechanical ventilation system. As I mentioned above, Lstiburek disagrees with the premise that a blower door can tell you how much ventilation a home needs. They sidestep the whole issue of existing homes, though, by making a standard for new homes only.

In 62.2, the infiltration credit applies to both new and existing homes. The committee has decided that air leaking into the house through random holes in the building enclosure can qualify as ventilation air. Even though that standard is titled, Ventilation and Acceptable Indoor Air Quality in Low-Rise Residential Buildings, there’s no IAQ justification for allowing infiltration to count as ventilation. It could be coming from the garage or the attic or the vented crawl space. Air from those places generally makes indoor air quality worse, not better.

Climate zones and sensors. The new BSC standard includes no provisions for adjustments based on climate zones. According to Lstiburek, you can make a convincing argument that cold climates need more ventilation, but you also can make a convincing argument that hot, humid climates need more ventilation. In the end, he says, it’s best to have a one-size-fits-all standard and leave the variations to the occupants.

On the topic of CO2 or relative humidity sensors controlling the ventilation systems, Joe wrote a while back, “CO2 and humidity are not good proxies for good air quality. They are better than nothing. But not much better.” So the BSC standard has no provisions for changing the ventilation rate based on those factors.

Kitchen and bath exhaust fan. One difference between ASHRAE and BSC in the local exhaust is that the kitchen and bathrooms must have standalone exhaust fans only. Their standard does not allow continuous exhaust at a lower rate as does 62.2. “Get the stuff out quickly and effectively. Then turn these fans off,” Joe said.

One of the most important aspects of this new standard is that it recognizes that not all ventilation systems are created equal. Exhaust-only ventilation relies entirely on random leaks in the building enclosure. Supply-only systems have numerous problems themselves. Balanced systems are the best, but they’re more expensive.

The launch of BSC-01

As I mentioned above, this standard is still in draft form and hasn’t been released yet. Some details may change before the final release, but the bones of it are mostly in place now. The official launch of Building Science Corporation’s first standard, BSC-01, is set for early August, during the Westford Symposium on Building Science (affectionately known as Building Science Summer Camp, the official meeting of the Building Science “Illuminati†“).

Currently, ASHRAE 62.2 is used in several places, mainly because it’s been the only show in town. It’s deeply embedded in the ENERGY STAR new homes program, with many requirements therein taken straight from 62.2-2010.

As with the competition for adoption between BPI’s and ACCA’s energy audit standards, soon BSC will be giving ASHRAE some competition for residential ventilation standards. You can read a lot of the details of the debate between Max Sherman and Joe Lstiburek in Martin Holladay’s article, but so far it’s all been over what should and should not be included in ASHRAE 62.2.

With a competing standard soon to appear in the marketplace, organizations looking for guidance will have alternatives beyond just adopting 62.2 or not. Joe is confident that his new standard will get adopted in more places than 62.2.

In fact, I think he’s really looking forward to the battle. His response to Max Sherman’s statement that “resistance is futile” is:

See these two followup interviews, too:

How Much Fresh Air Does Your Home Need? by Martin Holladay, Green Building Advisor

† Max Sherman has made other comments that aren’t helpful to his cause either. In an ongoing discussion on ventilation in the Building Science Community group on LinkedIn, he’s taken to calling unspecified opponents of his ideas the “Illuminati.” For example, in discussing odors, he wrote that “the kind of sub-standard system certain illuminati argue for would be fine” if controlling odors were the only necessity. So first he talks like a Borg, and then he accuses his opponents of being part of a secret society bent on controlling world affairs.