Posted by Allison Bailes on December 9, 2013

Relative humidity is what everyone likes to talk about. It gets the attention, but it can be a bit confusing, especially when the temperatures drop. For example, at one point yesterday, we had a relative humidity (RH) of 97%. Seems humid, eh?

It's not really. Not in terms of how much water vapor is actually in the air, that is. The psychrometric chart below shows how this works.

The two points I've highlighted on the chart are:

They're connected by the arrow, indicating that when that cold, seemingly humid, outdoor air leaks into a home by infiltration, it warms up. Let's assume that the mass of air leaking in doesn't gain or lose any water vapor molecules along the way. 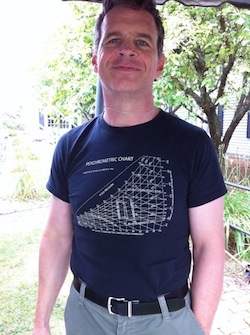 On a nice spring day when the temperature has risen to 70° F and the RH is 50%, the absolute humidity is about 50 grains/lb. Can you find that on the chart above? Can you find what the dew point is for that condition? (Answer below)

One of the worst kind of days we have here in the Atlanta area is when it's about 80° F an 80% RH. Ugghhhhh. The absolutely humidity is about 122 grains/lb, and the dew point is 73° F. And that's not even the worst I've experienced in the Southeast. Atlanta has nice, fairly mild summers compared to where I was born: Houston, Texas.

If you have a smart phone, you can find apps that do psychrometric calculations for you. I have two on my iPhone. One is the Ultra-Aire Psychrometric Calculator made by Thermastor. They make great dehumidifiers, and their app can help you find how much water removal you'll get based on the input and output conditions of the air. You can also do basic psychrometric calculations with relative humidity, absolute humidity, dry bulb temperature, and dew point. I also have one called Psychrometrics Lite, which does the basic calculations and allows you to adjust for altitude. Both of these are free. You can get more advanced apps that cost a few bucks.

One of the benefits of being in PST is I get to see your articles while everyone else nips asleep.

ALlison - You might append or follow up this thouggt with a comfort application. Fact is that for most of the country, on most days, we have less of an "air conditioning" (read cool the temperature) problem and more a humidity (reduce the moisture in the air) problem. This is especially true for superinsulated homes, and huge problems for superinsulated homes with small gapes in air barrier that allows moisture inside to equalize with outside.

Maybe there are a couple articles here.

Steve W.: The graph is a bit hard to read, but the I drew is at 32° F. The lowest temperature given on the horizontal axis is 35° F, and I started a bit before that.

geoff h.: Absolutely. I usually break things down and focus on one little bit at a time. I also like to be seasonally appropriate, and most of my readers are in the Northern Hemisphere. Once we get back into cooling season, I'll hit the topic you suggest.

Three cheers for focusing on this subject. So many discussions would be clearer if people could just get basic education about temperature and humidity -- I was on the other side for a long while and recognize how much my thinking has changed.

Back to "Reading Graphs 101" for me :-(. In my feeble defense, it's been so long since I used a psych chart, I was looking at the right side, vertical numbers.

I shall think long and hard before again criticizing the great one :-).

Excellent article on a topic too few civilians appreciate!

Allison, great article. Could you please comment on claims by some HVAC installers that some heating technologies are more comfortable than others because "they don't dry out the air as much." Thanks.

If you sell those shirts, I would like the graph on the back of the shirt. Timely topic! Thanks.

Conversely, the warm, conditioned air inside the house, that has an RH of 20% and then diffuses or escapes through bypasses into an attic with a temperature of 32 will condense and freeze on the sheathing. A great reason not to add humidity to the air inside the house in the winter.

I sometimes lay awake at night, wondering where all that water is going...