It was the stack effect that led me to Building Science Fight Club. I wrote about it two years ago and all hell broke loose in the comments, especially in the version I posted at Green Building Advisor. People get passionate about their building science, ya know.

Anyway, I'm in Boston this week for NESEA's Building Energy conference. It's cold here. A lot of buildings are in various stages of the construction process. Many have plastic draped over whole sides of them. In other words, it's a great time to get some photos showing the stack effect.

The photo below doesn't show the stack effect. The plastic on that one is getting sucked in all over in this view. I think wind here was dominating stack since this was down near the water. 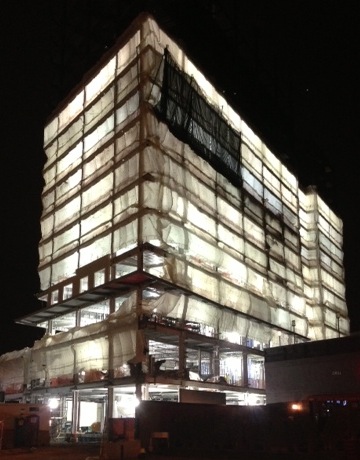 Note: I have no idea why that photo at the top is rotated. This was supposed to be a 10 minute article but my blogging software decided to thwart that objective by rotating my photo mysteriously and giving me no power to make it right. I'm hoping I'll be able to fix it later. Sorry. For now, turn your head sideways. You can turn it into your morning yoga.

Update, 10 March 2014: I've fixed the orientation problem and the photo appears correctly now. Continue on with your morning yoga anyway.

Sure is a high neutral pressure plane on that plastic coated building. Yes, very cool visual of the stack effect.

Oh, and computers...they gotta do something now and then to aggravate the daylights out of us. Just seems SOP. :)

WIND is the dominant effect in Oklahoma for sure, especially for a single story building.