Ceiling fan manufacturers now have to label their boxes with the efficiency rating—called efficacy and given in cubic feet per minute of air movement per watt of electrical power input (cfm/watt). I wrote about this a couple of years ago, and one of the points I made in that article was that larger fans have higher efficacies. That's not the only factor, of course, but all else being equal, efficacy increases when you increase the blade length.

What that means, if you're looking for a fan that does its job as efficiently as possible, is that you should get a bigger fan than some of the boxes recommend. To make matters even more confusing, the ENERGY STAR page on ceiling fan sizing recommends installing smaller, less efficent fans than you really should. Here's their sizing chart:

Another brand that comes close is Aeratron, with its  E502-SL and E503-SL models. They come in at 608 to 655 cfm/watt on low speed and 357 to 383 cfm/watt on high speed. [Also see John Semmelhack's comment below for another high-efficacy ceiling fan.] If you download the ENERGY STAR ceiling fan spreadsheet, you can see the numbers for all the ENERGY STAR certified ceiling fans. 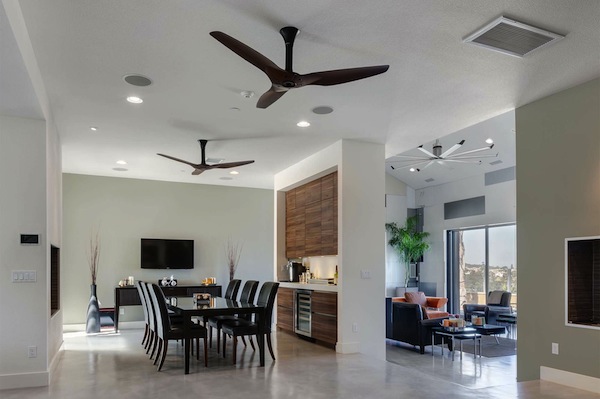 If you're on a budget, however, and don't care at all about efficiency or aesthetics, you can always do what these folks did. 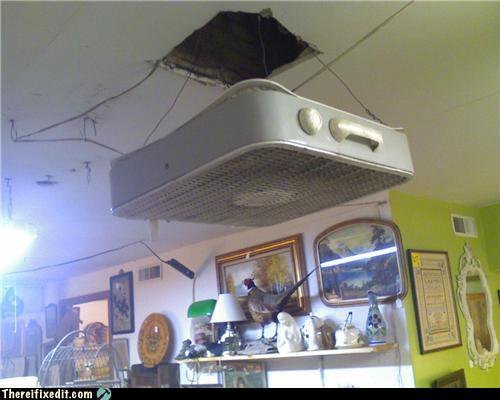 Thank you very much for this article, and putting into numbers just how much air movement we get for our watt-hour energy. Some of these innovative designs with different aesthetics, I am intrigued by... but might be a difficult sell to my spouse.

Many people already know this, but a high efficiency 3-ton AC is likely to draw about 2800 watts when operating. The Aeratron website seems to claim 50 watts or less. But since ceiling fan makes you feel cooler, a person gets the lion's share of energy benefits from using *any* fan in lieu of air conditioning.

There are a couple additional fans out there now that compete with the Haiku for highest cfm/W....specifically, the Harbor Breeze #M70-5B and #40190...both come in well over 1,000cfm/W on low speed. Guess their diameter....a whopping 70"!

While they don't look as good as the Haiku, they come in at about 1/5 the cost, I think!

Is there is a similar relationship of diameter and efficiency of standard HVAC furnace and AC central blowers? I remember working on some very old commercial blowers that had huge diameters but moved very slowly yet moved a lot of air and were driven by not a lot of horsepower.

I understand that moving air in a room can make it feel significantly cooler than it actually is - and potentially you can therefore save energy by not running the AC. And if you are in a "tiny" home of less than 400 sqft, a couple of these can really do the trick. But in a moderately humid environment, I'm thinking that all the fan is doing is simply pushing interior moisture around. Does a fan do ANYTHING to address indoor humidity levels? And could it potentially exacerbate those levels? A scary thing I am hearing builders and HERS raters pushing in WNC is the "poor man's ERV" of simply running a bath fan all the time. Of course by its nature stick frame construction is not very tight, so it is constantly bringing in humid air from the outside in the summer - and of course the indoor humidity was already there in the winter. So back to the point of my question, does air circulation in any way address or exacerbate indoor humidity levels?

Nice post today. The one thing I'll add, make sure the efficacy is being explained the same across platforms. While products are using CFM/Watt, I know of Programs that have requirements in Watts/CFM. Obviousky, easy to determine the difference when we have 500 CFM/Watt, but when talking HRVs for instance .75 cfm/watt or .75 watt/cfm can be easy to confuse.

M. Johnson: Yeah, I like the innovative designs, too, but they're not for everyone.

John S.: Thanks for the info about the Harbor Breeze fans. I'll check into them.

Richard P.: The fans in furnaces and air handlers are a different type but probably follow a similar rule for size and efficiency. As I've covered here many times, though, the efficiency of air movement in forced air distribution is limited more by the resistances that the fan works against: filters, coils, heat exchangers, and duct friction and turbulence.

Charles: No, just moving the air around inside a home doesn't change the humidity levels. It may prevent mold growth, however, if it keeps air from stagnating behind furniture and other places likely to grow mold.

Dan W.: Good point! Thanks for bringing that up.

I have both AC and fans in my 1940 brick rambler. We insulated the attic and changed the windows, added AC, etc., but the most effective change was to open all windows before bedtime and let night air flow through the house. Then we closed all windows about 8 a.m. or so. The house stayed cool until late afternoon. No need for AC at all.

Another fine and timely article.

I would add that another often overlooked consideration is the distance between the blades and the ceiling. I believe the optimum dimension is something on the order of 18" and extender rods are of course available.

I also have sought out fans with remote controls that permit easy reversing and multiple speeds.

And don't be dissin' box fans. That's what I used in my attic hatch for my "poor man's whole house ventilator" till a neighbor was throwing a proper unit. I had even stacked two for a while (with GFI, natch) till I learned one fan has to rotate in the opposite direction to get the full effect. You will see that on some propeller driven aircraft.

And when you combine fans with dehumidification you really achieve comfort - especially in mid-Atlantic, Southern, or mid-West areas.
I absolutely hate attic fans for the above regions as the operation really only works for a couple weeks during the year (too hot/humid otherwise) but the big hole into the attic is there 24/7. A window fan in an unoccupied room (spare BR, living room, etc.) exhausting air and other BR windows open will accomplish the same thing without the big hole in the ceiling. For mild climates like greater SF Bay area - never mind.

I should have mentioned I live in the high desert of Carson City, NV (4500') where humidity is below the detection level of any instruments known to man...well, almost.

I've lived in DC and nothing short of hurricane force winds will offset the brutal summer RH.

It is interesting that the Energy star table touts about smaller fans for most modest room sizes. several years ago when completing a project that included providing ceiling fans for several multi-family complexes one of the required criteria was that the fans were to be Energy Star certified. You could not find an Energy Star ceiling certified fan with less than a 50 to 52 inch diameter.

An important part of the performance of the fan is the blade. Standard flat blades do not perform as well as the more aerodynamic blades that are used on the Haiku and other high performance fans. The Hampton Bay Windward 54" ceiling fan @ Home Depot has been sold for over 10 years. It has high performance blades based upon a design developed at the Florida Solar Energy Center. It is the best performing fan I had experienced till more recent experiences with the Big Ass fans.