What Is the Difference Between Energy Efficiency and Efficacy?

When I was doing research for my recent article on ceiling fans, I noticed that they don't have energy efficiency ratings; they have efficacy ratings. There's certainly confusion in terminology among different sources, but since light bulbs are also described by their efficacy, I started wondering about the term. I'd just accepted it before, with a vague understanding that there was something different about how it was defined. Now I know why.

How much bang for your buck?

Here's the deal. Efficiency in general is defined as output divided by input. It's a number that tells you how much bang you get for your buck.

By itself, though, that definition doesn't distinguish between efficiency and efficacy because the latter is also a bang-to-buck ratio. Here's the difference: An efficiency rating has the same type of quantity in the numerator and denominator. That quantity is energy.

Take a look at furnace efficiency, for example. The official efficiency rating is called Annual Fuel Utilization Efficiency, or AFUE. It's the number of BTUs of heat that can be delivered to the heated space divided by the number of BTUs of heat that result from burning the fuel. A typical furnace might have an input rating of 80,000 BTU per hour and have an AFUE of 80. That means 64,000 BTU of heat per hour get delivered to the house.

Efficacy is different but the same 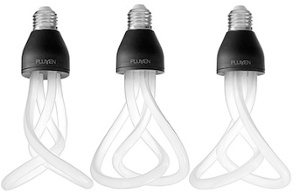 With ceiling fans and light bulbs, you put energy in and get something else out. With fans, it's air flow, measured in cubic feet per minute. The rating that you see on ceiling fan boxes now shows cfm per watt.

With light bulbs, you put energy in (watts) and get brightness out (lumens). Look for the ratings on light bulb packages, and you'll see lumens per watt.

In both of these cases where we use efficacy, the output quantity chosen makes more sense to look at than does energy. With heating and cooling, it makes more sense to talk about efficiency because we want to know about the energy output, and we can measure it relatively easily.

Now you know the difference. You can use the word efficacy and look smart. And you'll look even smarter when someone asks why you're using that word instead of efficiency.

The End of the Incandescent Light - A Victory for Energy Conservation

Always wondered about the difference in terms also- thanks!

This article certainly improved my efficacy: Useful information in - appearing smart out.

Good job, Allison! Now what we have to do is relate cfm to health - maybe DALY/cfm?

I very much like the distinction between efficiency and efficacy. Efficacy … meaning “the ability to produce a desired or intended result”.
All too often sealing ducts, insulating ceilings and walls, properly sizing equipment, reducing infiltration and many of the other aspects of building performance are spoken of solely in terms of energy efficiency… but what about comfort? The “intended result” of most buildings and their mechanical systems isn’t to save energy … it’s to provide comfort.
IE: I really hate the way this hamburger tastes … but you have to love the price.
The reason we so often default to efficiency is because efficiency is easier to measure. What would you say? Is selecting the right size equipment going to have a larger impact on efficiency or efficacy? Is locating supply vents closer to exterior walls going to have a larger impact on efficiency or efficacy? (I know there are a lot of variables … is the system a quarter ton too big or three tons too big.) Not really looking for an answer, just trying to provoke a little thought.
I would imagine that in the world of building performance professionals, Return On Investment is often a hard sell in simple terms of dollar and sense, based on efficiency alone. ROI in terms of efficacy is perhaps an even harder sell because it is more difficult … if not impossible … to quantify.
I have for years, run comparison numbers (for my area of the country) on the installation cost between different SEER equipment. ( The only cost difference being the equipment. ) The ROI on a base 13 SEER verses a 16 SEER is 10 to 12 years. Consequently we sell higher SEER equipment based on efficacy and not efficiency. Armed with the facts a surprising number of clients do choose efficacy even when they know there is little or no efficiency ROI.

I like that. My first thought when I read "And you'll look even smarter when someone asks why you're using that word instead of efficiency." was also that people will look at me like I'm stupid for mispronounce efficiency. Oh well. Thanks for the heads up