How Much Should You Worry About Asbestos in the Home?

Asbestos was a popular material for most of the twentieth century, mainly because of its ability to insulate and act as a fire retardant. In fact, it's still used heavily in some parts of the world, such as India and China. We know enough about the risks now, though, that it's banned outright in more than 50 countries according to asbestos.com and banned for some uses in the US. But how worried should you be if you find it in your home?

Asbestos in the home

One of the places you might find asbestos in a home is the duct system. The white tape you see above is of the type that often contains asbestos, although you don't really know without sending a sample to be tested in a lab. If you have an older home with rigid metal ducts, as shown above, it might have the white fabric tape you see in the photo.

The video below, from the 1920s, shows two workers applying a thick insulation material to the boiler and ducts in the home. (Skip to the 6:20 mark to see that part.) That stuff probably had asbestos in it.

See the web page on asbestos in the home at the US Consumer Products Safety Commission for more.

What health problems does asbestos cause?

The big three diseases listed on all the asbestos websites are:

All of them result from asbestos fibers getting into the lungs. Asbestos occurs in six mineral types, and all have fibers that are harmful to lung tissue, getting embedded in lung tissue and causing inflammation, scarring, and eventually tumors. The photo below (from the US Geological Survey) shows the fibers of the Chrysotile type, which makes up about 90% of all the commercially available asbestos. 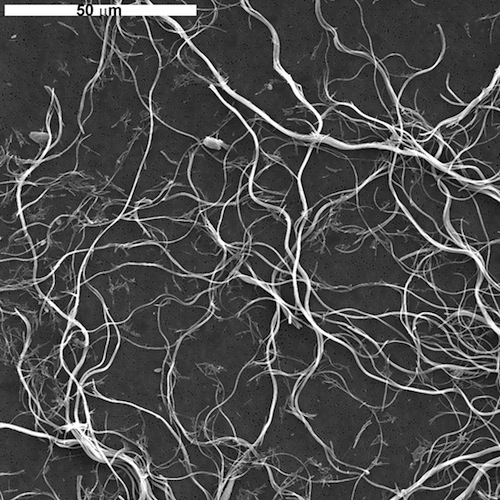 Asbestosis is an inflammation leading to shortness of breath, coughing, and other breathing problems. Mesothelioma is a cancer of the protective membrane around the lungs. Lung cancer is well known because so many people succumb to it each year, mostly from smoking. (Both of my parents died of lung cancer; both had been smokers.)

The World Health Organization says asbestos exposure leads to these three diseases killing more than 107,000 people worldwide every year. That's a big number. In addition, many more people die of other asbestos-related diseases or suffer various levels of disability.

The problems with asbestos have been known for a long time. The ancient Persians and Romans used the stuff and may have noticed health problems associated with its use. In 1902, asbestos was added to a list of harmful industrial substances in England. Nellie Kershaw, who worked in a factory spinning asbestos fibers into fabric, was the first officially diagnosed case of asbestosis. She died in 1924. (See Discovery of Toxicity section in Wikipedia article on asbestos.)

The consensus in the medical community is that asbestos is dangerous, which is why it's classified as a known human carcinogen. There's no debate on that point, and the lawyers have had a field day litigating asbestos health problems.

Are you at risk?

If you live in a home built before 1980, there's probably some asbestos in it. The stuff was used in a lot of different building materials. But here's the good news for homeowners. The people who get asbestosis, mesothelioma, and asbestos-related lung cancer are almost always people who fall into one of these groups:

Another group being watched because of high asbestos exposure are the people involved in the rescue and cleanup efforts in New York City after the 9/11 attacks in 2001. It'll be a while before we know how bad it really was because it generally takes 10 to 40 years for symptoms to appear.

Asbestos in some form is in millions of homes, but I haven't been able to find statistics on the health effects of asbestos exposure in the home. That doesn't mean they aren't there, but the cases of health problems from occupational exposure dominate. The only mention of health problems from exposure in the home that I could find are related to people living with asbestos workers or living near asbestos mines or mills.

That doesn't mean you have nothing to worry about, but I think the National Cancer Institute's view is one to keep in mind:

Everyone is exposed to asbestos at some time during their life. Low levels of asbestos are present in the air, water, and soil. However, most people do not become ill from their exposure. People who become ill from asbestos are usually those who are exposed to it on a regular basis, most often in a job where they work directly with the material or through substantial environmental contact.

In other words, don't panic.

What should you do about asbestos in the home?

If you do find something in your home that you think may contain asbestos, rule number one is:

Don't mess with it!

If you see white tape on your ducts, as shown in the photo above, vermiculite insulation in your attic, as shown below, it's probably not causing a problem as long as it's undisturbed. (Vermiculite insulation, which may contain the Tremolite types of asbestos, is a big enough topic that I'll write a whole article about it later.) Asbestos isn't like radioactivity, which can be a hazard because it constantly emits radiation. Asbestos only becomes a problem if it becomes airborne and gets into your lungs at a high enough dose. 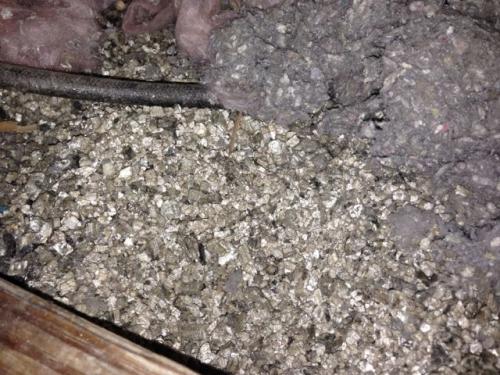 If you're concerned about a particular material in your home, you can call an asbestos inspection company to come in and have the material tested. They'll take samples using the approved protocols and send them to a lab for testing. When you get the results back, the company you hired can help you decide what your next steps should be.

As long as you're not planning to make changes to the home that require disturbing it, it might be best just to leave the material alone. If the suspected asbestos-containing material is friable, encapsulating or enclosing the material can help prevent the fibers from getting into the air. But this's not a job to be taken lightly, so you should hire a pro. The US EPA has a good page for homeowners on what to do if you may have asbestos in your home.

A word to the pros

For those who work in the fields of HVAC, insulation, plumbing, home performance, or remodeling and deal with older homes, you're likely to come across many homes with materials that may contain asbestos. You owe it to yourself and your family to take all the proper precautions when working with these materials.

You may not have the exposure that killed Nellie Kershaw after only seven years of spinning asbestos fibers into fabric. You may not even get enough exposure over a career to cause problems. Still, do you want to take that chance? I can tell you from my experience with asthma as a child that having difficulty breathing is no fun at all. And from seeing both of my parents die of lung cancer, I can tell you that's not a nice way to go.

If you spend a lot of time in the attics, basements, and crawl spaces of older homes, don't mess around with materials that may be dangerous. Whether you're an employer or employee, check out the OSHA page on asbestos and be safe.

We humans are a curious and ambitious lot, always striving to understand the world around us and improve our circumstances. If a material exists anywhere near the surface of the Earth, we've found it and exploited it for its useful properties. Like the toddler touching the hot stove, though, we often don't discover the harmful properties until after the damage is done. That is also true of asbestos.

The stuff is out in the world now, and we must deal with it. The key is to use caution and know what you're dealing with.

Asbestos.com - good description of the six types of asbestos minerals

Photo of asbestos fibers from the US Geological Survey.

I remember high school and college chemistry labs with 6x6 screens we put under flasks over bunsen burners. Asbestos, of course. They were still used unto the 1970's exposing millions of students. An amazingly useful product, with this one "little" problem. I suspect that as many lives were saved by its fire resistance as were lost to its carcinogenic properties, but still not worth the cost.

I'm looking forward to more on vermiculite. This stuff is the bane of my existence, it's all over my local area and has proven a dead end to improvements after an audit. It usually costs as much or more to properly remove it from an attic than all of the air sealing and insulation work that I would recommend and so far I haven't had a single customer go for it (maybe I'm just a bad salesmen). I know in some cases another contractor is hired to blow over top of it, which means no air sealing and kicking the asbestos can down the road. I've done three audits of just purchased homes (home inspection and all) and I was the first to tell the them about possible asbestos content. This stuff is a frustrating gray area because it's almost impossible for testing to rule out the existence of asbestos, to the extent that most officials seem to get an uncomfortable look on their face when I bring it up. "Don't touch it" is ridiculous advice because in an attic it's going to get disturbed at some point, some houses I've seen have whole house fans or duct work that could be actively pumping it into the living space. The fact is most people seem unwilling or unable to pay to have it removed and I wish there was a way to get it out of there so it can be sealed and insulated.
I'll stop there, as you can see the topic frustrates me. Here's hoping you've found some mechanisms to actually get this stuff removed.