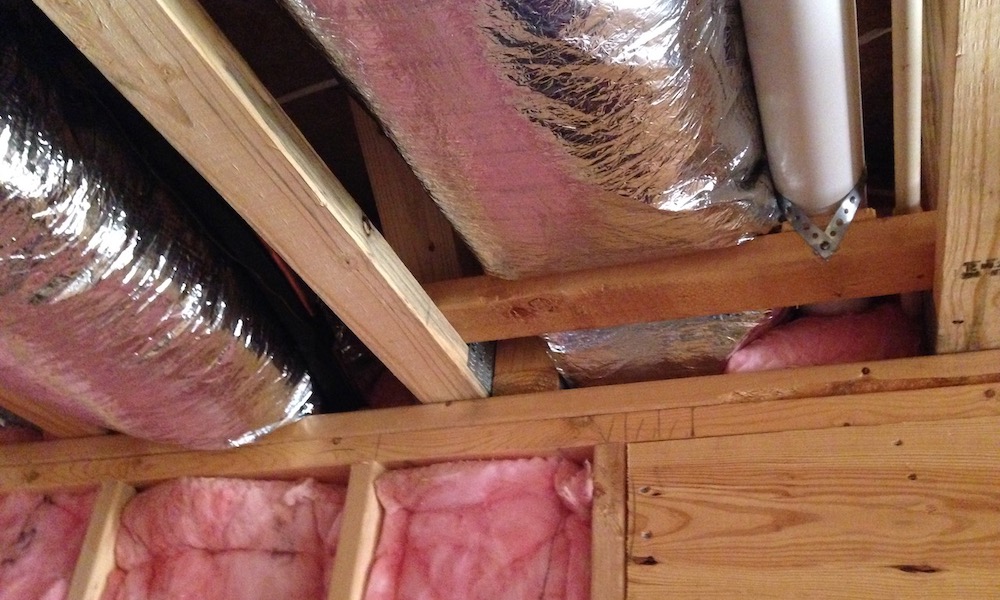 The photo above shows a common problem in new homes. It’s also one that can make it difficult to pass the blower door test required by many building codes these days. If I tell you that the wall pictured here separates two rooms in a basement and one of them is not conditioned, can you see the problem? If so, how many mistakes do you see here?

The building enclosure is the boundary between inside and outside. It separates conditioned space from various types of unconditioned space. In the case of the wall above, it separates the conditioned part of a basement from a mechanical room with three atmospheric combustion appliances – two 80 AFUE furnaces and a natural draft water heater, all of which burn fossil gas.

The air barrier problems are in the joist area above the wall. They are:

The way this part of the building enclosure is constructed is pretty near impossible to fix after the fact, especially with flex duct running through the joists. What would have worked is to put in a rigid air barrier before running the ducts or plumbing, as you see in the photo below.  (Believe it or not, I took that photo in the same house where I took the one above.)  Then, every trade contractor who cuts a hole owns that hole and must make sure it gets sealed.

Ideally, the HVAC contractor would do more than just cut a hole and run the flex straight through. The movement of the flex can defeat the air sealing over time, so the best way to run that duct would be to install a rigid connector through the rigid air barrier and then connect the flex to either side of it.

To get the trades working on a job to respect the air barrier, 475 High Performance Building Supply and Pro Clima have a great sign for builders to post on their jobsites.

As this home is almost finished, there’s not much hope for the mechanical room on the other side being the “sealed” combustion closet it needs to be.